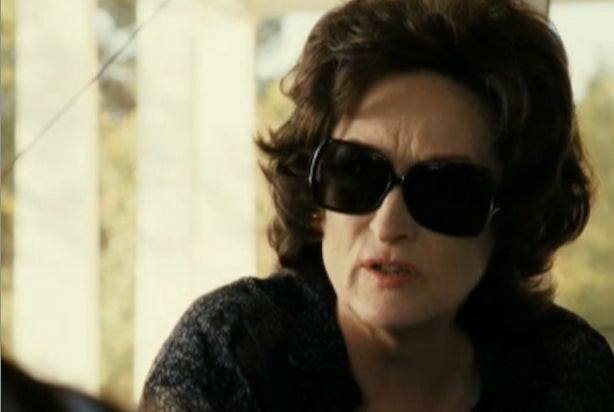 “August: Osage County” has all the trappings of an Oscar powerhouse, but it will leave the Toronto Film Festival with a few dents in its armor.

The adaptation of Tracy Letts’ Pulitzer Prize winning play features a cast of past Academy Award winners and nominees like Meryl Streep, Julia Roberts, Chris Cooper, Sam Shepherd and Juliette Lewis. It’s also being distributed by the Weinstein Company, which knows a thing or two about Oscar campaigning.

But the film’s world premiere this week at Toronto drew mixed reviews. Most critics were kind to the individual performers, but accused the picture of being overly stagey and marred by an inconsistent tone that veered from comic to tragic, often in the same scene.

The film hits theaters on Dec. 25.

Don’t write off the film’s awards chances just yet though. There was good news for the filmmakers, as TheWrap’s Steve Pond noted that the audience greeted the film warmly and laughed uproariously throughout.

Pond declared the film to be one of the festival’s biggest crowd-pleasers and argued that Streep is a serious contender for some Best Actress attention for her role as a pill-popping and congenitally caustic matriarch.

“And with the unstoppable Streep in charge, it’s difficult for a viewer not to go along for the ride even if they’re a little uneasy (as I was) about the fact that the broad comedy sometimes swamps everything in its wake,” Pond wrote.

One of those happy to be on this dysfunctional roller coaster was Film School Rejects’ Kate Erbland who declared “August: Osage County” to be the pinnacle of family dramas. So take that “Ordinary People.”

“Crisp, cracking, and increasingly more bruising with each passing minute, August: Osage County is an actor’s movie about a distressing series of events that still manages to be accessible and amusing,” Erbland wrote. “An instant classic of its genre, ‘August: Osage County’ will be enjoyed for years to come by people who like to gawk at both sterling performances and stirring family troubles.”
Also read: Toronto: 5 Lessons We’ve Learned From the Festival So Far

Tim Robey of the Telegraph lamented that Letts’ languidly paced play had been trimmed from over three hours to a more manageable two, which meant some characters get short-changed. Yet he still felt that enough of the “August: Osage County”s’ prickly wit remained to keep viewers satisfied.

“A vastly enjoyable theatrical banquet, if perhaps not a profound one, is served up in a bit of a rush here, as if they can’t wait to get the next sitting in,” Robey wrote. “But you certainly don’t come away feeling hungry.”

The film is too lumpy at parts and Streep relies on technique instead of inspiration to get her part across, wrote David Rooney. Still the Hollywood Reporter critic was mostly enthusiastic about the filmmaker’s fidelity to Letts’ script and maintained that the shots of the vast Oklahoma landscape add another dimension to the play’s acerbic family drama.

“Arriving on the screen with mixed dividends from an all-star cast, the film doesn’t shed its inherent theatricality, stringing together speeches and showdowns peppered with nuggets of stagey dialog that resists being played in naturalistic closeup,” Rooney wrote. “But it’s nonetheless an entertaining adaptation, delivering flavorful rewards in some sharp supporting turns that flank the central mother-daughter adversaries.”

Catherine Shoard of the Guardian was far more negative in her assessment. She wrote that the film  would have benefited if director John Wells was less reverent about Letts’ text.

“Wells sacrifices flair to fidelity,” Shoard wrote. “Letts is one of the most formidable talents around today, but in handling his screenplay with such kid gloves, Wells puts a passenger in the driver’s seat. The results are far from a car crash, but they do smack of the rubberneck.”

“August: Osage County” suffered from a lifelessness that comes with trying to transfer stage works to screen, Drew McWeeny of Hitfix wrote. He noted that the technical aspects of the film and the acting are all strong points, but detected a certain listlessness to the final product.

“It’s just unfortunate that something that had so many truly talented people so excited to be involved could come together in a way that is more inert than unenjoyable,” McWeeny wrote. “I don’t think I’d call ‘August: Osage County’ a bad film, but I’m damn sure I wouldn’t call it a great one.”