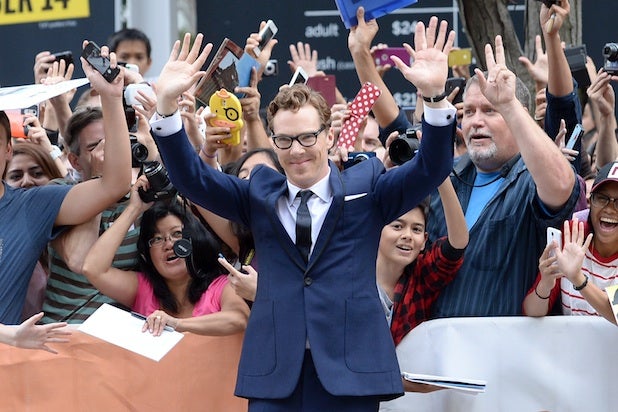 When Benedict Cumberbatch, Keira Knightley and director Morten Tyldum took the stage of the Princess of Wales Theatre on Tuesday night to introduce the Toronto International Film Festival premiere of “The Imitation Game,” they had more than just the fate of one screening hanging in the balance.

They also carried with them the Oscar hopes of the company that transformed the awards game — hopes that were most likely buoyed by reactions to the screening.

At the moment, “The Imitation Game” looks to be the Weinstein Company’s best hope for a major awards film, its big opportunity for a contender to stand alongside past TWC titles like “The King’s Speech,” “” and “” — and before that, at Harvey and Miramax Films, “Chicago,” “In the Bedroom” and “My Left Foot.”

Weinstein’s other 2014 releases include “St. Vincent,” which seems likeliest as a Best Actor vehicle for ; “Begin Again,” a serious contender only for Best Original Song; and “The Disappearance of Eleanor Rigby” a big question mark (though I count the two-part version as one of my favorite cinematic experiences of the past year).

“The Imitation Game” is crucial because Weinstein has been so successful in the Oscar race over the years, with back-to-back Best Picture wins for “” and “” in 2011 and 2012, expectations are always sky-high for the company.

But now they haven’t won the top Oscar for two whole years, and last year they only managed to get a best pic nod for “Philomena,” a film many had counted out and one that might not have had any shot in the hands of less savvy campaigners. When you have Harvey Weinstein‘s track record at the Oscars, those two things apparently count as disappointments.

And now that the company has parted ways with its longtime Oscar consultant, Lisa Taback, all eyes will be on Harvey and his crew. That also means that all eyes will be on “The Imitation Game,” which won an enthusiastic ovation the instant its credits began to roll, as well as spontaneous mid-show applause after one of Knightley’s speeches and after the team led by Cumberbatch’s Alan Turing cracks the German’s Enigma code to help turn the tide in World War II.

The story of Turing, a brilliant, antisocial eccentric who was instrumental in the Allies victory during the war but was persecuted (and prosecuted) afterwards because he was gay, “The Imitation Game” sticks mostly to the WWII years as it illustrates a phrase used a few times in the film: “Sometimes it’s the people who no one imagines anything of who do the things that no one can imagine.”

Cumberbatch’s Turing does things no one can imagine, breaking the unbreakable code and almost inventing the computer in the process, but there’s plenty of suffering to go with the triumph. For the actor, who just won an Emmy for the “Sherlock” miniseries, the role absolutely puts him in the mix for an Oscar nomination – though the fans who offered comments like “Benedict, I think you really are quite yummy” during the post-screening Q&A probably weren’t thinking much about awards chances.

But the Weinsteins were, no doubt. Solid, a touch slow and richly textured, “The Imitation Game” is clearly in the Oscar mix in plenty of categories, even if it’s not quite as obviously an awards-bait movie as the other TIFF title about a famous Englishman overcoming the odds, “The Theory of Everything.”

Afterwards, Norwegian director Tyldum, who first came to TIFF with the 2011 movie “Headhunters,” said he would have preferred a different line to run at the beginning of his movie.

“It shouldn’t say, ‘Based on a true story,'” he insisted. “Everything in the film actually happened.”