Fall is here, and there is a bevy of excellent newly added movies streaming on Amazon Prime Video to get you in the mood for the season change. Whether it’s a horror classic, Oscar-winning thriller or genuinely great animated film, there’s a little something for everyone in our curated list of some of the best new movies streaming on Amazon Prime Video this month. So if you’re having trouble picking a movie to watch, you can’t go wrong with something on our list.

These are some of the best new movies streaming on Amazon Prime Video in September 2022.

An American Werewolf in London

Kick off spooky season in style with one of the best horror movies ever made, “An American Werewolf in London.” Filmmaker John Landis’ 1981 film toes the line between horror and comedy perfectly as it follows two American backpackers who are attacked by a werewolf while traveling in England. One dies, and the other is left to question whether he’ll soon turn into a werewolf all while being haunted by the rotting corpse of his best friend. This one has groundbreaking makeup effects by Rick Baker that set the gold standard for werewolf transformations.

How to Train Your Dragon

Something the whole family can enjoy, 2010’s “How to Train Your Dragon” is a sweeping, adventurous and deeply compassionate tale of friendship and prejudice. Set in the year 1010 AD, the story takes place in a small Viking village where Hiccup (voiced by Jay Baruchel) is the awkward and slight young son of the hulking village chieftan (voiced by Gerard Butler). Dragons are meant to be feared, but when Hiccup stumbles across a rare and injured dragon he names Toothless, he learns that dragons may not be so evil after all. Just misunderstood.

Director Mike Nichols and writer Nora Ephron are a match made in heaven in the 1986 romantic comedy/drama “Heartburn,” which stars Meryl Streep as a version of Ephron as the story offers a semi-autobiographical version of the famous author/screenwriter’s challenging relationship with journalist Carl Bernstein. Jack Nicholson plays the Bernstein role in the film, as it charts his infidelity and its impact on the duo’s marriage and children. Streep is spectacular in this harshly realistic portrait of a marriage that’s infused with Ephron’s biting wit.

If you’re up for a laugh, “Role Models” is something of a hidden gem. The 2008 comedy stars Paul Rudd and Seann William Scott as energy drink salesmen who, after a mishap, are forced into community service. They end up joining a big brother-big sister program that pairs them with young boys, one of whom is obsessed with LARP – live-action role playing – and played by Christopher Mintz-Plasse. The film hails from “Wet Hot American Summer” and “Wanderlust” filmmaker David Wain.

The Silence of the Lambs

Still the only horror film to win Best Picture, “The Silence of the Lambs” is a classic for a reason. Director Jonathan Demme’s adaptation stars Jodie Foster as a young FBI trainee who is tasked with enlisting imprisoned serial killer/cannibal Hannibal Lecter (Anthony Hopkins) for help in tracking down a serial killer of women who goes by the name Buffalo Bill. Demme’s direction is the secret weapon here, preventing the film from becoming gross or exploitative and submerging the viewer into the point of view of Foster’s character. The film won Oscars for Best Picture, Director, Actor, Actress and Adapted Screenplay.

The highest-grossing James Bond movie of all time, 2012’s “Skyfall” officially set the franchise up to compete with the superhero movies that were dominating the box office. In many ways this is the ultimate James Bond film, as Daniel Craig’s character is put through the wringer with a battle against a figure from his (and M’s) past. Director Sam Mendes and cinematographer Roger Deakins bring a refined sophistication to the aesthetics, and the story doubles down on the emotional and raw nature of Craig’s 007.

A contained spy thriller with a heck of a lead performance, “The Outfit” hails from Oscar-winning “The Imitation Game” writer Graham Moore who serves as writer and director on the story of an English tailor (played by Mark Rylance) who gets caught up in a mob war one night while working late in his shop on Saints Row. Zoey Deutch, Dylan O’Brien and Johnny Flynn co-star in the film which largely takes place in the same location, but is dripping with tension and packed with reveals. 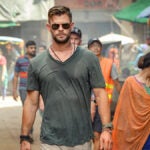