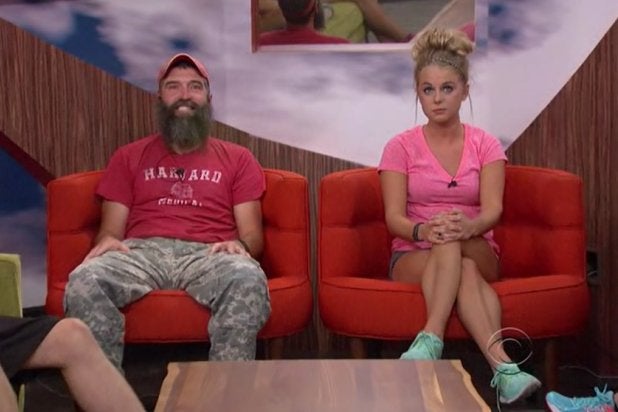 The latest live eviction episode of “Big Brother” had a strong statement from America, and a surprise for the evicted houseguest. Donny and Nicole were facing eviction, with the latter having just returned to the house. But an unexpected offer from “The Bold and the Beautiful” was waiting for the one who walked out the door.

Team America consists of Donny, Derrick and Frankie and their mission this week was to come up with their own mission. Donny smartly suggested the mission could be to save him, because he believed America would like to see that. Frankie, however, was not on board.

Derrick was skeptical because of how it could impact his game. He is, after all, quietly masterminding the Detonators to the point none of them know he’s really been running the entire house for weeks. Instead, Caleb remains pretty confident that he’s the brains behind the operation.

That’s when he’s not coming up with more brilliant theories about Donny’s black ops background as one of America’s most elite secret agents.

Rejecting Donny’s suggestion, Frankie instead came up with the idea of performing a play for America, with the Houseguests taking on the personas of those already evicted. Julie Chen made it pretty clear what America thought of that when she said the response was an “overwhelming no.”

No $5,000 for Team America, and America has spoken. Donny is as beloved outside of the house as in, so America would have probably loved watching their “Team” stick together and find a way to keep Donny safe.

That said, it’s hard to argue with the decision to eliminate him. Even though Nicole was reintegrating into the house pretty well, and she’s a savvy player, Donny had proven himself week after week in challenges. They’ve been trying to get rid of him most of the summer, and he just keeps schooling the youngsters in these challenges.

So when they finally got their chance, the Detonators pulled the trigger and evicted the teary groundskeeper. It wasn’t really a surprise to anyone watching, or even Donny himself. Each week, “Big Brother” tries to edit these episodes to make us think someone might be ready to make a big move and flip the house, but it never happens. The Detonators are in control and have been all summer.

Once all of their targets are gone, that’s when “Big Brother” will really start. Nicole will probably be the next one to go, unless she can pull off a miracle. Then things will get interesting, because there are strategic reasons to drag Victoria all the way to the end. She hasn’t really played the whole season, so who would vote her worthy of the half-million dollar prize?

There was a surprise this week, though, and Julie Chen presented it to Donny during her interview with him. Apparently, CBS’s “The Bold and the Beautiful” soap opera reached out to the reality show and expressed interest in having Donny appear on the show in a guest role.

Donny looks more like he’d fit in on “Duck Dynasty” than “The Bold and the Beautiful,” so it would certainly be interesting to see what kind of role they’d find for him, if he takes them up on the offer.

He proved himself so genuine and likable this summer, though, Donny will probably find more opportunities awaiting him than just his hopes of securing his job back as a groundskeeper. With his natural charm and charisma, he would do very well in a variety of media formats. It just depends how high his aspirations are.