Restaurants are notoriously unstable operations, even as the showbiz allure around food has elevated them to a level of glitter, grandeur and desirability beyond being places to simply get a meal. Movies don’t typically care about capturing the stressful chaos of a full-throttle kitchen made of diverse, overworked personalities; the stories we get instead typically focus on star chefs as heroic leads, or lovingly photographed cuisine as a balm for the soul.

But all that passion usually comes at a price, which makes the British indie “Boiling Point” — set inside a London hotspot on a make-or-break night, with Stephen Graham as its edgy, preoccupied head chef — a rare attempt to wrestle with what goes on inside these cramped, pressurized spaces. It’s also an admirable misfire, in that its strengths are always competing with a regrettable artistic choice on director–co-writer Philip Barantini’s part: filming “Boiling Point” as one unbroken shot.

Single-take movies are always bravura feats, whether genuinely filmed without interruption (“Russian Ark”) or made to look as such with clever editing (“Birdman,” “1917”). But movies are hardly made better because of it. It’s easy to understand how Barantini might equate the frenetic flow of a restaurant with an energy that never stops, and admittedly, a scenario like “Boiling Point” is perhaps better suited to that kind of virtuosity than other types of stories. 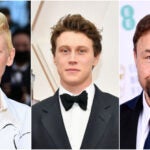 But never cutting is a type of never choosing, too, and the various interpersonal dynamics created by Barantini’s and James Cummings’ screenplay deserve more — reaction shots, spatial variation, temporal manipulation — than a visual gimmick built to seem fast-paced but which grows tiring as its aesthetic constrictions show.

What always percolates is the cast, starting with Graham’s Andy Jones, who storms in late to his buzz-generating restaurant in the minutes before an insanely busy night with clearly a lot on his mind (and in his system, perhaps, if the clingy swigs from that water bottle are any indication). An initial burst of yelling at his staff carries a faint whiff of covering for his own mistakes, but it’s also clear his core team — led by dependable, sharp-eyed sous chef Carly (a wonderful Vinette Robinson) and fired-up chef de cuisine Freeman (Ray Panthaki) — are ready to do what it takes to make the night a bang-up one. 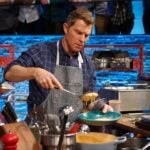 They’ll need it, too, because slated to arrive is Andy’s former partner-mentor Alistair Skye (Jason Flemyng), whose ascension to the ranks of celebrity chef, and the fact that his companion is a high-toned restaurant critic (Lourdes Faberes), clearly rankles Andy, adding an extra layer of tension to the night’s service.

“Boiling Point” is best when cluing us in to the errors, humiliations, and aggressions that make service-industry work a brutal gig, especially when it’s dependent on the smooth flow of communication and a healthy dose of swallowed indignation. There’s the obnoxious big spender who talks kindly to the blonde white server, but who, when he has to interact with a Black female server, turns rude and insulting. An off-menu order from an obnoxious table of Instagram food influencers is accepted by roaming hostess Beth (Alice Feetham) without any consideration to the kitchen’s ability to fulfill it.

The latter dilemma leads to the movie’s best-written and best-acted moment, as the underappreciated Carly explosively dresses down Beth’s inconsiderateness, a raw screed about disrespect and inequity that one imagines could be repeated in restaurants around the globe. 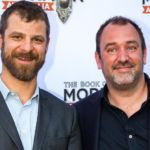 But that inter-employee dynamic has to share space with the less-satisfying and predictable storyline of Andy and Alistair, which is affected by an even more consequential turning point for the restaurant, related to a diner’s surprise proposal to his girlfriend, that you can see coming from a mile away. By the time “Boiling Point” brings its strands of friction to a head, the early intensity of Graham’s portrayal of a battered, self-destructive character is dissipated by the movie’s temporal rigidity and the invariably blah moments following minor characters that we know are there to give the main actors time to ready their next moment.

Graham, Robinson, and Barantini’s thematic concerns about how restaurants work are strong enough ingredients. It’s too bad they’ve been subjected to the one-note flavoring of a single-take movie.