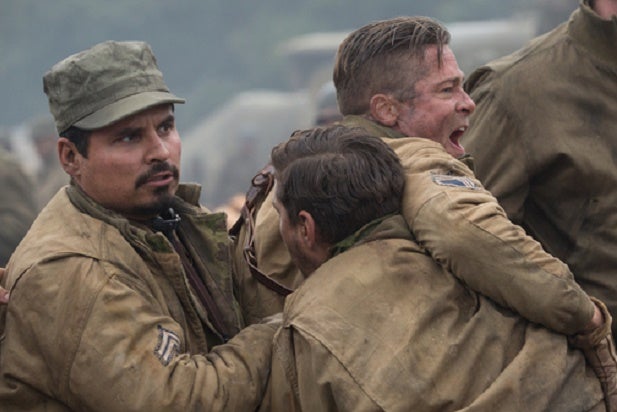 The Ben Affleck-starring thriller took in $17.8 million and edged another Fox release, “The Book of Life,” for second. The Guillermo del Toro-produced animated tale opened to $17 million. The weekend’s other wide opener, the romance “The Best of Me,” fizzled with a $10.2 million debut — the worst-ever for a Nicholas Sparks adaptation.

“Brad Pitt is a movie star,” Sony distribution chief Rory Bruer told TheWrap, “There’s no doubt about that. But the camaraderie of the cast really pulled audiences in, and the story is so well told that people will be talking about this one.” Shia LaBeouf, Logan Lerman, Michael Peña and Jon Bernthal co-star in the David Ayer-directed film.

The opening didn’t come close to that of the last film in which Pitt starred, the blockbuster “World War Z,” which debuted to $66 million last summer. And it didn’t match “Inglourious Basterds,” another Pitt-starring war saga that opened to $38 million in 2009. But it topped the $22 million February opening of George Clooney’s WWII tale “The Monuments Men,” and is easily Ayer’s best debut.

Selling a violent, R-rated tale of a U.S. tank team behind enemy lines in Nazi Germany is no small feat, and this is a solid start for the $68 million release from Sony, produced by QED International, LStar Capital, and Le Grisbi Productions/Crave Films.

The audience for “Fury” included more women than might be expected — 40 percent — perhaps owing to Pitt’s appeal. It also played younger than a WWII movie might be expected to, with nearly half the crowd under the age of 35. It received an “A-” CinemaScore, in line with the critics who have it at 80 percent positive on Rotten Tomatoes. “Fury” also received a big boost from Premium Large Format screens, which provided $3.5 million, or 15 percent of its grosses, an all-time high for PLF.

It was a nice weekend for Fox, which had the No. 2 and 3 movies. “Gone Girl” held very strongly again – losing just 32 percent of its audience from last weekend – and is now up to $107 million. And this is a solid start for “The Book of Life.” The film from Reel FX Animation Studios, written and directed by Jorge Gutierrez , focused on Mexico’s Day of the Dead, and got a big boost from Hispanic families.

“This was a labor of love for Guillermo and Jorge and the voice cast (Diego Luna, Zoe Saldana, Channing Tatum and Christina Applegate), and that came through to audiences,” Fox’s head of distribution Chris Aronson told TheWrap. Hispanics made up 30 percent of the audiences, which was 57 percent female and 54 percent under the age of 25.

Moviegoers gave “The Best of Me,” starring Michelle Monaghan and James Marsden, a “B+” CinemaScore. That was much better than the critics, who have it at a dismal 7 percent positive on Rotten Tomatoes. But not enough Sparks fans turned out to prevent the ninth big-screen adaptation from the famed romance author to be his weakest debut ever, below the $12 million that “A Walk to Remember” opened with back in 2002. And it wasn’t even half the $21 million that his last film, “Safe Haven,” opened with on Valentine’s Day weekend last year.

The production budget for “The Best of Me” was $26 million, but Relativity said that with pre-sales and tax credits, its exposure was limited to $5 million.

It finished in fifth, behind Disney’s family film “Alexander and Terrible, Horrible, No Good, Very Bad Day.” The comedy starring Steve Carell and Jennifer Garner held well in its second week, off just 35 percent, and brought in $12 million to up its domestic total to $38 million.

Universal’s “Dracula Untold” had a strong Saturday and wound up in sixth with $9.8 million, giving the monster reboot starring Luke Evans $40. 7 million after two weeks.

Warner Bros.’ demon doll tale “Annabelle” scared up another $7.9 million and is now up to $74 million domestically and more than $150 million worldwide, making it the year’s highest-grossing horror film.

It was neck-and-neck with another Warner Bros. release, Robert Downey Jr.’s “The Judge. ” The courtroom drama co-starring Robert Duvall fell off just 39 percent in its second week, good news for the studio, which is hoping that mature audiences give it staying power.