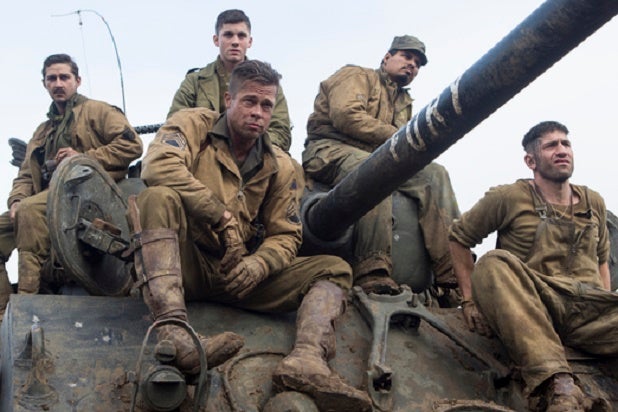 “Fury” looks to unseat moviegoer magnet “Gone Girl” at the box office this weekend, so how is the Brad Pitt tank drama faring with critics?

The David Ayer (“End of Watch,” “Street Kings,” “Sabotage”) directed World War II film about an outnumbered U.S. Sherman tank crew on the frontlines of ground warfare in Germany, has won mostly strong reviews thus far across the board, with a 76 percent approval rating on Rotten Tomatoes. Those certainly aren’t “Gone Girl” numbers, but it’s a very strong showing for a film about a subject matter that doesn’t quite have as wide of an appeal as the aforementioned Ben Affleck starrer.

The one thing most reviewers focus on is Ayer’s penchant for capturing the gritty reality of violence — not the fake hyper-reality so popular in the oversaturated era of superhero franchises that we’re living through or the parody of violence seen in “Fury” star Brad Pitt‘s last WWII drama from five years ago, Quentin Tarantino‘s “Inglorious Basterds.”

TheWrap’s James Rocchi says that Ayer’s film accomplishes everything it sets out to achieve, calling “Fury” (also the name of the tank that the central characters operate), “a film about tank warfare in the waning days of World War II, (that) does not flinch or fuss when it comes to showing the blood, gore and gristle of modern armed conflict. But at the same time, by doing so, it attains a savage grace that turns its brutality into a kind of truth, as hulking metal juggernauts crush across the landscape spitting fire and death with fragile, mortal flesh-and-blood men inside. This isn’t disposable popcorn entertainment, or a winking ‘war’ film like ‘Inglourious Basterds.’ Ayer’s aim here is a film that will stick, and stick with you. And he achieves it.”

A.O. Scott of the “New York Times” concurs that this is what elevates the film to greatness. “These killings are staged with an air of grim necessity,” he writes. “And Mr. Ayer, a hard-boiled screenwriter (“Training Day”) and action director venturing into ambitious genre territory, has a way of filming violence that is both intense and matter-of-fact. Like many other post-“Saving Private Ryan” combat movies, this one emphasizes the chaotic immediacy of battle, staking its claim to authenticity on the unflinching depiction of bloodshed: Heads are vaporized by mortar rounds. Limbs are severed by bursts of automatic-rifle fire. Human flesh is charred by flames and shredded by shrapnel.”

Richard Corliss at “Time” — a bit more critical — says that Pitt is excellent and takes the film to the next level. “Pitt, who at 50 still looks great with his shirt off, has the gruff charisma to play a dauntless soldier with killer courage and a vestigial streak of humanity,” he writes. “He carries a film that could stumble under the burden of its clichés.”

However, it’s 22-year-old Logan Lerman (“The Perks of Being a Wallflower,” “My One and Only”), who plays the inexperienced and untrained new-to-the-Fury-crew Norman Ellison that receives the most praise from the “New York Observer’s” Rex Reed.

Reed calls Normal “well played” and adds that “the actors are all good, Mr. Pitt moves even closer to iconic stardom, and young Mr. Lerman steals the picture as the camera lens through whose eyes and veins we share every dehumanizing experience.”

And although “Fury” has a long running time, Marshall Fine of Hollywoodandfine.com says that it’s “one of the few that warrants its length (or most of it).”

He echoes the sentiment heard from most other reviewers that “Fury” is a “Brutal, punishing and exciting — in that order — (it) gives you an approximation of what it would be like to spend a few action-packed days trapped inside an under-equipped American tank toward the end of WWII. You get everything but the smell. And you can imagine that.”

“While there’s not a lot of plot, there is a big story at work in Ayer’s script,” he adds. “The plot focuses on the events of a few days with a tank crew, as they head toward a showdown with the Nazis. But the story examines the effects of war on the human soul, in this microcosm of the population.”

If that’s not Oscar bait in the same vein as 1998’s “Saving Private Ryan — which won Steven Spielberg his second Academy Award for directing — it’s unclear what exactly will be this year. Unless, of course, there’s a “Shakespeare in Love” waiting in the wings to steal its thunder.