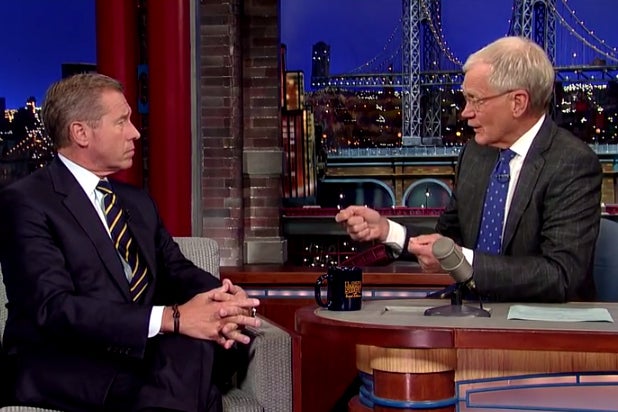 “NBC Nightly News” anchor Brian Williams stopped by “The Late Show” on Thursday in part to be a proud papa.

On the CBS late-night talk show, host David Letterman congratulated the newsman on daughter Allison Williams‘ (“Girls”) titular role in NBC’s upcoming “Peter Pan Live!” Letterman also asked last night’s guest if he was nervous for his daughter to take on the iconic role. The answer was “No.”

“I have listened to those damn songs since she was three-years-old,” Brian Williams said. “Whether some network was going to invite her to do it on television, immaterial. She’s been Peter Pan since she was old enough to make a sound.”

Letterman’s next question for the Williams family patriarch was if his clan be in-house to watch the big production, which will be filmed in an airplane hangar way out on Long Island. That answer was also “No,” and also for good reason: the TV journalist and his family want to watch it as a television event.

“I just want to be a viewer,” Brian Williams said.

Where, though, was a harder question to answer. But the newscaster managed to provide one that was both touching and funny.

“We also want to be with her the minute it’s over, so I think they’ll probably build a modest three-story frame home for us to use that evening,” he said.

The elder Williams managed to land another good joke in the four-minute broadcast TV segment.

Admitting one concern due to the live nature of the production, he sarcastically joked: “Reassuring to know that Christopher Walken will be sword fighting with my little petunia.”