Movies about fighters might technically fall under the sports film umbrella, but they inhabit a unique genre all their own, one that has knocked out many a first-time director. A keen eye for character must be matched with an expert ability to construct fight scenes in all their rawness and technological beauty.

Halle Berry’s directorial debut “Bruised” is no exception. It’s a valiant effort from Berry, but it doesn’t quite hit the mark, weighed down by a formulaic script, uneven fight direction, and little depth in exploring how a female fighter’s experience might change when a role written as a white, Irish woman is played by a Black actor.

Former Ultimate Fighting Championship star Jackie Justice (Berry) has been out of the game for more than four years. Disgraced, she lives with her alcoholic boyfriend-manager, Desi (Adan Canto, “Designated Survivor”), and the two seem to do nothing but fight (and not just verbally), drink, and have sex. One night, he takes her to a fight, and Jackie ends up being the main event by putting the night’s winner on the floor. She catches the eye of Immaculate (Shamier Anderson, Apple TV+’s “Invasion”), a fight league promoter, who recruits her to train for a title match against Lady Killer (Valentina Shevchenko, the real-life UFC Women’s Flyweight Champion). 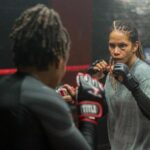 Immaculate sends Jackie to train with Buddhakan (Sheila Atim, “The Underground Railroad”), and just as Jackie seems to be ready to return to the ring, her mom shows up with Manny (Danny Boyd Jr., “Good Girls”), the son Jackie gave up in his infancy. Manny’s dad died, which left the child refusing to talk. Jackie must now face her own demons as she tries to reclaim her fighting career while also learning how to be a mother and leading Manny out of his trauma.

Berry’s strongest asset as a director is her innate love for every single character in the film. She sees them all, and in every frame, she and director of photography Frank G. DeMarco (“A Mouthful of Air”) caress her actors with the camera. For a first-timer, Berry’s eye excels in the framing of small moments, crafting an intimacy between characters — particularly between Jackie and her son, and Jackie and Buddhakan — that resonates throughout the movie. But there are several other moments that feel unearned, with script and editing choices simplifying certain scenes (Jackie’s training, for instance), never really providing much room on which to build.

Berry’s direction hits its biggest shortfall in the fight scenes, opting at times for the overused shaky-cam effect in an attempt to hide the fight choreography that is crucial for a film about a MMA fighter. That isn’t to say that Berry hasn’t put in the work to transform herself physically into the character; she most definitely did. But the direction doesn’t make room for that transition to register. Yes, we see the obligatory training beats and her improvement throughout the course of the film, but at times, “Bruised” seems like it wants to break out of a cage and transform into a bigger story.

The script, by first-timer Michelle Rosenfarb, originally conceived Jackie as a white woman, and it suffers the same fate of many stories where characters switch races — a lack of understanding that an experience changes based on the person who embodies the role. Jackie’s specific history as a Black woman in the very white and very male world of the UFC would be drastically different than that of a white woman. Yes, they would both be subject to sexism and misogyny, but there’s no question that the Jackie that Berry brings to life would have a far more complicated relationship with the sport. 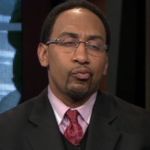 Also Read:
ESPN’s Megan Olivi Says She Was ‘So Hurt’ by Stephen A Smith Overlooking Her UFC Coverage

Speaking of relationships, the script also fails to build upon some of the character interactions it introduces. For example, Jackie’s relationship with her mother Angel (a wonderful Adriane Lenox, “The United States vs. Billie Holiday”) is contentious at best, but rather than set up a foundation, the film places a blow-up near the end of the film to reveal why their connection is so strained — and then it does nothing with that information. It’s so frustrating that Rosenfarb puts everything out there, allowing two fabulous actresses this huge emotional scene, and then lets all that delicious tension just die.

And that’s how “Bruised” winds up feeling overall: It’s a great build to a story that never figures out how to set itself apart.