In today’s roundup of Cannes news ‘n’ notes from around the web, one elderly gent gripes about aging, while another becomes a new celebrity.

What do you do if you’re an important journalist from a publication that usually gets one-on-one interviews, but you go to Cannes and find yourself in the press-junket assembly line with only 10 minutes to get your quotes from Michael Douglas? If you’re Manohla Dargis from the New York Times, you write a “Wall Street: Money Never Sleeps” story that’s more about the constraints and restraints of the junket process than about your interview with Douglas, whose quotes occupy the last 150 words of her 1,000-word story. She said she got 13 minutes and 58 seconds with him (running almost four minutes overtime!), though I’d be surprised if more than 30 seconds worth of quotes made it into her piece. (The New York Times) 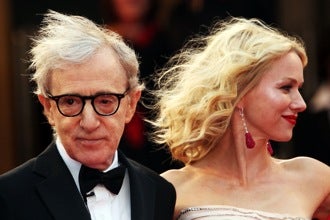 The Huffington Post has a slew of Cannes photos, and the AP story on Woody Allen’s Saturday Cannes press conference for his new “You Will Meet a Tall Dark Stranger.” As Sharon Waxman suggested in her account of the press conference, the 74-year-old Allen is one grim, fatalistic guy these days. A typical tidbit: “It was said by Nietzsche, it was said by Freud, it was said by Eugene O’Neill: One must have one’s delusions to live. You look at life too honestly and clearly, life does become unbearable, because it’s a pretty grim enterprise, you must admit." Must we, Woody? Really? (The National) (Photo of Allen and Naomi Watts by Sean Gallup/Getty Images)

Even Woody Allen says he wouldn’t mind aging like this: Movieline salutes “the sexiest breakout star on the Riviera this year,” 101-year-old director Manoel de Oliveira, who made his first movie in 1931 and has made a film a year since 1990, including his new “The Strange Case of Angelica.” Andrew Bailey offers a suggestion to studio heads: “Do not pass up this rare chance to sign De Oliveira for your next magical-realist bodice ripper à la ‘The Time Traveler’s Wife’ or ‘The Lake House,’ because this is your man — he can go the distance.” But wouldn’t it have been better to suggest that they hire the guy to make a good movie? (Movieline)

It’s all a matter of priorities, and Elizabeth Snead makes hers clear with this headline: “Cannes 2010: Forget films. Check out Salma Hayek, Eva Longoria, Camilla Belle’s one-shoulder gowns!”  Still, somewhere in between her talk of Gucci frocks and fringed Puccis, Snead slips and mentions a few films … although she reinforces her cinematic-indifference credentials by balancing a paragraph about Olive Stone’s “Wall Street” with one about two distinctly un-Cannes-like pictures, Pamela Anderson’s “Blonde and Blonder” and Lindsay Lohan’s proposed Linda Lovelace biopic. (The Dish Rag at Zap 2 It)

Two Cannes journalists, the L.A. Times’ Steven Zeitchik and the Chicago Tribune’s Michael Phillips, sit seaside and talk about movies in a three-minute video clip. It plays a little like a truncated version of Phillips gig at the post-Ebert “At the Movies.” Except that they only cover two movies and don’t really argue. (Los Angeles Times)

Jeff Wells didn’t care for Cam Archer’s “S— Year” or Woody Allen’s “ … Tall Dark Stranger” (“minor”), but he’s a definite fan of Charles Ferguson’s “Inside Job,” a documentary about the 2008 financial meltdown. “Every Average Joe and tea-bagger needs to see this film at least twice and take notes each time,” says Wells – though, given his widely-known distaste for Average Joes and tea-baggers, he goes on to say there’s not a chance of that happening. And he’s afraid that even though the film is “a highly absorbing, meticulously composer hammer doc,” it’s arriving too late to have significant impact. (Hollywood Elsewhere)

Sasha Stone details the Cannes life of a self-employed blogger without an expense account: “bleary-eyed fatigue, constant hunger, and work work work.” Plus, in her case, a work station stolen by a rude photographer when she got up to attend to a wifi problem. But she loved Mike Leigh’s “Another Year,” which she says is the strongest film she’s seen at Cannes so far. (Awards Daily)

Guy Lodge also raves about “Another Year”: “Leigh’s deceptively harsh but supremely moving film may be a paean of sorts to togetherness, but it’s also an elegy to those we’ve let slide out of view.” (In Contention)