In today’s roundup of Cannes news ‘n’ notes from around the web, critics grade the fest, and Godard leaves ‘em guessing.

indieWIRE presents a guide to all the films shown in the first half of the festival, with rankings and links. In the criticWIRE average score, Mike Leigh’s “Another Year” and the out-of-competition documentary “Inside Job” received the highest average grades out of the first 20 films – and those were only A-. Then you’ve got one B+ (the Un Certain Regard entry “Blue Valentine”) five grades of B (“The Housemaid,” “Biutiful,” “Countdown to Zero,” Les Amours Imaginaires” and “The Strange Case of Angelica”), five more that received a B- (“Tournee,” “You Will Meet a Tall Dark Stranger,” “Outrage,” “Kaboom” and “Film Socialisme”), and a bunch of C+ and C grades. Plus one D+, for “Chatroom.” You might have heard that this year’s lineup is an uninspiring batch of films; well, here are the stats to prove it. (indieWIRE)

On the other hand, Pete Hammond looks at Cannes through the prism of Oscar and finds lots of possibilities. “Another Year”: a Best Picture nod, and a good Best Actress shot for Lesley Manville. “Biutiful”: Best Actor (Javier Bardem), Best Foreign Film if Spain submits it, maybe writing or directing for Alejandro Gonzalez Inarritu. “You Will Meet a Tall Dark Stranger”: don’t count out Supporting Actress Gemma Jones. “Wall Street: Money Never Sleeps”: maybe Carey Mulligan, maybe Michael Douglas, and just maybe Eli Wallach. Hammond also disputes the widely-held notion that this year’s lineup is weak: “[F]est director Thierry Fremaux has nothing to be ashamed of,” says Pete, who always has been a glass-half-full kind of guy. (Notes on a Season) 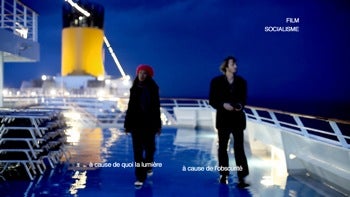 Legendary director Jean-Luc Godard sent his latest (and perhaps final) film, “Film Socialisme” (right), to Cannes, and he was supposed to come along for the ride and attend a post-screening press conference. But he didn’t, disappointing the cream of Cannes journalists who were hoping to get a few (no doubt inscrutable) words with the 79-year-old maverick. His “explanatory” statement, says Eugene Hernandez, was not exactly enlightening: “Due to problems the Greeks would be familiar with, I unfortunately cannot be at your disposal in Cannes. I’d walk to the ends of the earth for the festival. But alas I will not be taking a single step further. Sincerely, Jean-Luc Godard.” Well, that explains it. Or maybe the final frames of his movie (a title card reading “NO COMMENT”) explain it. (indieWIRE)

Roger Ebert tackles the Godard no-show with a cute headline – “Waiting for Godard” – and a lament for the filmmaker, whose latest effort is not, Ebert says, among his best: “The words and images add up to an incoherent mosaic involving socialism, gambling, nationalism, Hitler, Stalin, art, Islam, women, Jews, Hollywood, war and other large topics. I confess I have no idea what meaning they’re intended to convey.” He tries to read something profound into Godard canceling his press conference, but can’t really figure out what that means any more than he can figure out the movie. (Roger Ebert’s Journal)

But hey, Godard is Godard, so all the top critics take a crack at figuring out the movie. Manohla Dargis tries her best, comes up short, and then shrugs. “Obviously, it will take many more viewings of ‘Film Socialism,’ an improvement in my French and many more fully translated subtitles before I can begin to get a tentative grasp on it.” Something tells me that not many viewers will be prepared to go quite that far. (The New York Times)

Last week, Cannes had a screening of a restored version of the 1963 Palme d’Or winner “Il Gattopardo”; this week, it’s an expanded edition of the 1979 winner, “The Tin Drum.” German director Volker Schlondorff tells Scott Roxborough about the 22 additional minutes he’s added to the film – and he makes it sound as if the longer version was created not out of any driving artistic impulse, but simply because the lab asked him what he wanted to do with 60 boxes of material he hadn’t looked at in 30 years. (Reuters via the Hollywood Reporter)

As Mark Hamill hinted (and theWrap reported) last month, the actor formerly known as Luke Skywalker will make his feature directing debut with “The Black Pearl,” a film version of his own comic book. Hamill essentially admitted that he was going to be doing this at the L.A. Comedy Shorts Festival on April 17, but at the time he couldn’t say anything officially because his partners wanted to make the announcement at Cannes. So now they have. Hamill says his mood changes from “great confidence” to “what did I get myself into?” (The AP via Yahoo! Movies)