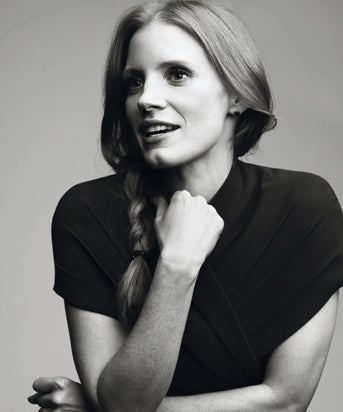 Photographed by J.R. Mankoff for TheWrap

A version of this story first appeared in CannesWrap.

When “The Disappearance of Eleanor Rigby” premiered at the Toronto International Film Festival last fall, it was already an audacious project for first-time director Ned Benson: two separate films, one subtitled “Him” and the other “Her,” about a relationship fracturing in the wake of a tragedy. “Him” was told from the perspective of James McAvoy‘s character, “Her” from the perspective of Jessica Chastain‘s; run back-to-back, the two films were stunning, deeply emotional and, one would think, wholly unmarketable.

As buyers came calling in the wake of the film’s triumphant premiere, the filmmakers were adamant that they would only make a deal with a distributor who agreed to release it as two films. “Every single person along the way has said it should be one film,” Chastain told TheWrap in Toronto. “But it will not be one film. Ever.“

And now Benson’s drama, which was bought by the Weinstein Co. in Toronto, has come to Cannes as … one film? The movie will compete in the Un Certain Regard section and will play as a single two-hour film, as opposed to the two movies and three-hours-plus of the Toronto version.

But that doesn’t mean the original films are dead. “This is a third movie,” Benson told TheWrap. “The two films that played in Toronto are intact, and the plan is to release all three. But we were given the option to create a combined, shorter film that focused on them as a couple rather than taking different perspectives.

“It was not what I initially expected, but I sat with the editor, and when we came up with this cut we were really excited and submitted it to Cannes.”

The Weinstein Co. has said that it plans to release the shorter version in September, and then do a smaller, arthouse release of “Him” and “Her” at an unspecified date. One can only hope that they give the original films a chance — because when they played back-to-back in Toronto, the two films allowed the audience to make connection and fill in gaps as the story progressed, deepened and grew richer and more detailed.

Together, “Him” and “Her” made for a shattering experience, a beautiful fantasia as fragile and striking as its shots of fireflies on a summer night. It left much of the crowd stunned; several of the cast members, including Chastain and Ciaran Hinds, had to compose themselves before taking part in the post-premiere Q&A.

“My hope is that all three versions get released — ‘Him,’ ‘Her’ and ‘Them,’ which is what we’re calling it,” said Benson. “And if there’s anyone who can do this, it’s the Weinstein Co. and Harvey.”

Added Chastain in a recent conversation with TheWrap, “The great thing about this option is that it feeds on two different audiences. There have been a lot of conversations, and I have been absolutely promised by Harvey and the studio that the two films will be available for an audience. My heart would break if they weren’t.”

(In fact, the “Him” and “Her” versions are also being screened at Cannes.)

The film is the culmination of a journey that began a decade ago, when Benson’s first short, “Four Lean Hounds,” screened at a film festival in Santa Monica. Chastain, a theater-trained actress fresh out of Juilliard, won tickets to the festival and was reminded of “In the Bedroom” by Benson’s short — “it’s very rare that you see that kind of restraint from young filmmakers,” she said. She approached him in the lobby and said she wanted to work with him, and the two traded numbers.

“I felt very young and completely out of my league when I made that short,” said Benson. “But I guess it was visually arresting enough for this young lady to see it at a festival and remember me. If I had to make a short for that one reason, it was completely worth it.

“Of all the people who could have come running up to me at a little film festival, that was about as good as it gets.”

The two became friends, and Chastain watched — and tried to help — as Benson landed his first two scripts on the Black List, but couldn’t get the films off the ground. The second of those scripts was the “Him” version of “Eleanor Rigby,” which focused on a man whose wife has fled their old life.

“I gave it to Jess, and she read it and said, ‘Well, what happens to her?'” said Benson. “So I started exploring that, and it became something. All of a sudden it turned into a dialogue, and I thought it was really exciting.”

He worked with Chastain and producer Cassandra Kulukundis to capture the female perspective, then went back to his original script to rework the scenes where the action overlapped. “And one day, when we were playing with the concept of ‘Him’ and ‘Her,’ I remember Jess saying, ‘Wouldn’t it be totally crazy if your first movie was actually two movies? Let’s try it!'”

Financiers balked at the idea for years, but Chastain’s spectacular 2011 — which included “The Tree of Life,” “Take Shelter” and “The Help,” for which she was Oscar-nominated — suddenly made her marketable, and gave the project a boost. Benson got enough money to shoot both movies on a tight 40-day schedule, filming scenes from one character’s perspective and then the other’s.

It presented a daunting acting challenge: In one version of the story Chastain was playing her character, but in the other she was playing the McAvoy character’s memory of her, which meant that crucial details–dialogue, movement, even clothing–were different.

“It’s super-weird,” Chastain said. “I approached it like it was two different women. They’re both Eleanor, but they’re two different women. ‘Her’ is ‘This is Eleanor, this is my truth, this is everything I have.’ And ‘Him’ is Connor’s perception of Eleanor, which is very different.” (The “Them” version playing at Cannes mixes both perspectives to focus on the relationship.)

At the Toronto premiere, Chastain said, “I came in with so much nervousness. Before, I was telling people, ‘Don’t read anything, don’t Google anything. If there’s something positive, someone will tell you.’

“I was trying to protect Ned. I’d been there for all the false starts, all the disappointments with someone that I really cared about and believed in. Finishing the film was very cathartic for all of us — and sometimes it’s more special to watch someone you love have their dream realized.”

And now they’ll go through it again with a new festival, a new audience and a third version of “Eleanor Rigby.” “It’s a broader experience, and it gives the audience more choice,” said Benson. “But I do want to emphasize that the original two films exist exactly as they are.”