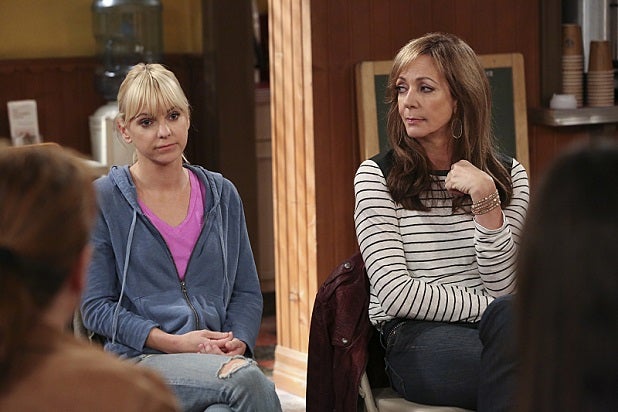 Chuck Lorre’s CBS comedy “Mom” — about a mother and daughter grappling with a number of issues while trying to maintain their sobriety — returns to the air for a second season Thursday at 8:30 p.m., bringing along another round of laughs mixed with tough topics.

TheWrap recently spoke to series star Anna Faris, who plays Christy on the show, about the challenges she’ll face this season (think: gambling addiction, homelessness), upcoming guest stars, and what she likes to do with series co-star Allison Janney‘s Emmys.

TheWrap: At the beginning of the new season, it’s revealed that your character, Christy, has a gambling problem. Are you a gambler in real life?
: No. Don’t get me wrong, I have plenty of vices, but with gambling, the anxiety of losing money trumps the thrill of the idea of winning for me. I’m also just naturally horrible at it — there’s definitely people out there who I am their favorite person to play poker with, because they will be going home with some money in their pockets.

Her gambling problem also causes her family to become homeless. How dark will the show go with that subject matter?
Not too dark. They move around from place to place. They move to a not super-nice motel and then get bounced around a little bit. I thought it was just so daring that Chuck and the writers made the decision to scrap our main set. I kind of feel like that every week when I get the script — I can’t believe that we address the issues that we address and that we go to the places that we go, and I feel like what we cover in one episode, another show would do over maybe six or seven episodes.

At the end of last season, Christy’s daughter, Violet (Sadie Calvano), made the controversial decision to give up her baby for adoption. Does that decision have repercussions for her in the new season?
Yeah. She’s definitely suffering I think from that loss. She’s kind of like a lost kid, she’s still very much a kid. And Christy and Violet have a lot of ongoing issues. Violet is very angry, and rightfully so, at her mom. I think my character last season was almost holding her tongue because she felt so guilty, so she let her daughter get away with more than she should have. This season, I think Christy’s losing her patience with her daughter a little bit.

Is it a weird balance to give dark topics the comedic treatment?
It’s truly Chuck and our brilliant writers who do this for us, and I’m just in awe of what they do. And I think that, for us as actors, especially in this format, it’s [about] learning that it’s OK sometimes to be quiet, and to not necessarily be punchy with the moment and to sort of settle into it. And hopefully in the next scene earn a big laugh, and hopefully that laughter is out of relief that these characters are going to be OK. And I love it that we get to kind of breathe in some of these episodes and moments when we are almost allowed, I guess — it’s kind of an odd way to put it — to not try to make the audience laugh. And that feels tremendous.

You have a number of heavy hitters coming aboard as guest stars this season. What can you tell us about working with them?
Jaime Pressly has been guesting on our show as a person who’s just entered the AA program, and my character Christy has idiotically decided to become her sponsor — Christy is not qualified at all to be a sponsor. Colin Hanks is guesting as a neighbor — I won’t spoil any surprises, but I love working with him. And Beverly D’Angelo as well comes in as Kevin Pollak‘s ex-wife, and that’s really exciting. I worked with both Colin and Beverly in “The House Bunny,” and it’s been great to be with them and work with them.

has had a pretty big year. Does she bring her Emmys to the set?
When I make her! They are so fun to hold. And six of them! I’m like, “Come on — you could just give me one!” They are truly a weapon, though. They’re fantastic.

Weapons? So do you guys have sword fights with her Emmys on set?
No, but she had a fun party where she had a bunch of friends over and we all pretended to do our acceptance speech. I have to tell you, it feels really good, and it’s definitely less nerve-wracking. But I’m so happy for her, and she deserves it. She’s a gem.

Anything else that people should know about the new season?
It’s funny and ridiculous and moving, and I hope that people enjoy it and watch it.