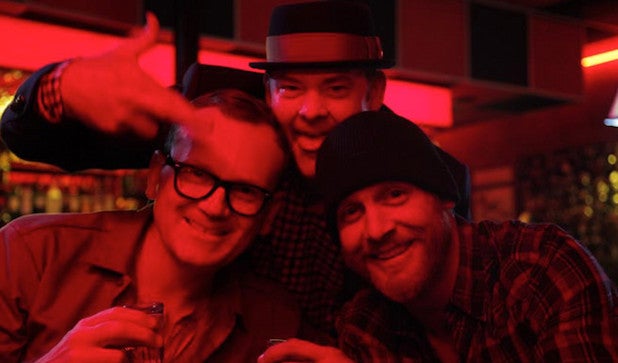 While “Divergent” stole most of the box office spotlight this past weekend, E.L. Katz’s disturbing genre movie “Cheap Thrills” made waves of its own, with a per-screen average that bested Disney’s “Muppets Most Wanted” and Lars von Trier‘s buzzed-about sex drama “Nymphomaniac.”

“Cheap Thrills” follows two working-class, down-on-their-luck guys (Pat Healy, Ethan Embry) who are invited by a wealthy couple (David Koechner, Sara Paxton) to participate in a series of progressively bizarre dares that could win them $250,000.

After “Cheap Thrills” opened in Los Angeles and Austin and averaged $9,550 per screen, Drafthouse Films CEO Tim League and producer Gabe Cowan (pictured below) of New Artists Alliance chalked up the film’s success to the power of social media and the movie’s innovative viral marketing campaign.

“‘Cheap Thrills’ is an epic film where they cross so many lines that you should probably do some lines before you see it just to follow along,” joked Arquette. “In all honesty, it is on the list of my favorite films I have seen in recent memory. The writing, direction and acting was flawless,” Arquette wrote in an email to TheWrap.

“These people have big followings and they’ve been engaging their fans,” League told TheWrap. “This is a really meaty role for David Koechner that shows he’s much more than Champ Kind from ‘Anchorman.’ He has a lot of ties to the comedy world and they’ve been supporting him online. Likewise, Pat has been a working actor for 15 years, but this is a commanding leading man performance from him.”

Critics have noticed, as the film boasts a 94% fresh rating on Rotten Tomatoes, which is extremely rare for a violent genre movie — even one that won the Audience Award at SXSW in 2013. The “Cheap Thrills” team returned to Austin for this year’s festival, where they piggybacked on publicity for producer Travis Stevens’ new horror movie “Starry Eyes,” which co-stars Healy.

The twisted dares depicted in the movie led the “Cheap Thrills” team to launch the “Share to Dare” program, which played a large role in the film’s digital campaign strategy.

Cowan credited League with the idea for “Share to Dare,” explaining that there was an email chain with all kinds of extreme suggestions. “Basically, Tim wrote to all his friends and said ‘I believe in the film so much that if you go to the movie and don’t like it, I will pay you back and you can slap me in the face.’ “

“One of the main things we stressed was the ‘Share to Dare’ campaign, which has led to us embarrassing ourselves in public,” echoed League.

Healy, Embry, League and Stevens performed several humorous dares, the highlights of which saw Healy recreating Burt Reynolds’ centerfold photo on a bearskin rug, Embry doing an impression of himself from “Empire Records” and League urinating on himself after being forced to drink beer without a bathroom break. League actually had to attend the Oscars after that event and while he brought a change of clothes, he forgot to pack an extra pair of socks and wound up sock less at the awards show.

In an effort to appeal to hardcore genre fans, Drafthouse also cut a new trailer last week that emphasized a particularly gruesome scene in which one of the characters is dared to chop off his own pinky.

“Cheap Thrills” finished the weekend as one of the Top 10 independent films on iTunes, where it outpaced the star-studded “Nymphomaniac,” a film that received much more press leading up to its release.

“Our marketing budget was very low but people really seem to be talking about it. We relied on word of mouth to get people to support indie cinema and feel like they’re part of a community. I think it’s the only thing that makes you stand out,” Cowan said.

Cowan continued: “Last week, more than 40 films were released on iTunes and VOD. People have a lot of choices. How are you going to be the one that they decide to see? Social media and viral marketing help you stand out. Otherwise, you need huge celebrities and lots of money behind you. Besting ‘Nymphomaniac’ in per screen average and on iTunes is really meaningful because that movie has Shia LaBeouf and Uma Thurman. It was released on 25 screens and had a lot of money behind it. It really made us feel that people were really behind our movie and championing it. It’s becoming a cause.”

To encourage theatrical attendance, Drafthouse has been “flying out cast members to various locations for live introductions, which reinforces our message to share and help support this film that deserves it,” said League. “We’ve also held live dare competitions with prizes in Austin, so the screenings have a party atmosphere. I’ve taken far too many tequila shots.”

When Cowan saw that “Cheap Thrills” had leaked on BitTorrent sites, the producer consulted Drafthouse Films, and the team decided to be proactive rather than shrug their shoulders. To discourage piracy, a 40-minute behind-the-scenes documentary was made available and it seems to have done the trick, with Cowan telling TheWrap that the documentary received more downloads than the actual movie.

“The VOD returns have been really good and we received pretty decent placement on Time Warner, Comcast and Cox. Our theatrical release and our VOD release have both been working together really well,” said League, who cautioned that social media means little if you don’t have a good movie to back it up.

“You can have great social media but if the reviews roll in and don’t live up to the hype, it doesn’t matter,” said League. “Five years from now when we’re all talking about Evan Katz, people will remember this directorial debut.”

“Social media is what made it a success this weekend,” added Cowan. “It was about supportive friends reaching out to friends who reached out to their friends and helped turn ‘Cheap Thrills’ into this little movie that could. I mean, we beat ‘The Muppets!’ I can cross that off my bucket list now and basically retire.”

After the success of “Cheap Thrills,” I double dare him to.

“Cheap Thrills” expands to New York and Chicago this weekend, before opening in 26 additional cities on April 4.