Not the beloved syndicated television series, which ran for three seasons and 65 episodes from 1989 to 1990 as part of the Disney Afternoon weekday programming block, mind you, but the live-action/animated adventure directed by The Lonely Island’s Akiva Schaffer.

This new movie takes place in a world where Chip (John Mulaney) and Dale (Andy Samberg) were stars of that long-ago TV show and have now grown apart, improbably brought together to solve a mystery that personally impacts their cartoon world (Monterey Jack, now voiced by Eric Bana, is missing). It’s a wild, irreverent world that Schaffer and his collaborators have conjured (if you’ve been online, you’ve seen Tim Robinson’s Ugly Sonic in action).

TheWrap spoke to Schaffer about what the appeal of the movie was for him, how he managed to clear all of the characters that show up in the movie (don’t worry, we don’t ruin anything), whether or not the movie takes place in the same world as 1988’s “Who Framed Roger Rabbit” and whether or not Chip was originally going to be animated in a more traditional, hand-drawn style. 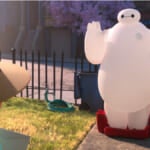 Also Read:
Baymax Sets Out to Save the City in New ‘Big Hero 6’ Spinoff Trailer (Video)

What was the appeal of ‘Chip ‘n Dale: Rescue Rangers’ for you?

I mean, there were so many different things that were appealing to me about it. One, let’s say on a technical level, I was just excited to learn everything you’d learn by making this movie, which means not just learning how to make an animated movie, because that’s the layer on top of it. But also learning how to just do modern filmmaking because if you think about the process, I had to do storyboards, animatics, pre-viz then go shoot in the real world for a while, but with characters who aren’t really there, and then go put the characters in, and then animation on top. That’s not that different from all the big movies that come out in the Marvel, Star Wars universes where you see the behind the scenes, you’re like, Oh, the, the whole environment was CG. Oh, that raccoon that talks in “Guardians of Galaxy,” that’s Bradley Cooper, he wasn’t really there. The difference of shooting that raccoon or shooting Chip and Dale is no different at all.

I saw what it is to make one of those things from kind of from a distance. I was always interested in it. That’s the technical reason. The other reason is I just read the script. And I liked all the clever, interesting stuff that’s in the movie, even if it changed, it was all there. In the script I read in 2019, it already had the comedy, it already had all the themes of Hollywood and best friends and the animation styles. And one is in 2D, one is in 3D, there’s claymation and there’s motion capture, and there’s puppets. It already had all these unique elements that were exciting on a creative level too.

What was the most challenging aspect of bringing this thing to life?

When you make something like this you, you’re making two movies on top of one another. You’re shooting a whole live-action movie. We shot for 30 or 35 days, we shot for more days than we shot “Palm Springs.” And then you’re just getting started on an entire animated movie on top of it. You have to make sure you really also like the movie, you know, and that is enough to sink your teeth into because you’re going to be working on it for a while. 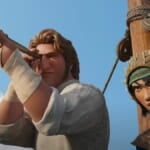 Also Read:
Why ‘The Sea Beast’ Director Chris Williams Made the Leap From Disney to Netflix

Chip is supposed to be 2D but he’s rendered in 3D. Did you ever think of just doing it in classic cel animation. Is that even financially feasible?

It’s not, that’s my main thing. I want to preface this by being like MPC is incredible. Our team is incredible. There’s stuff in there that maybe you knew was CG, but maybe you didn’t know. There’s really cool, amazing stuff. Whether you could tell or not, but just like the puppet looks so great and there was no puppet on set.

Our animation budget was maybe, I would say an eighth of what like a Pixar or Disney Animation movie would be. We had a smaller budget to begin with. And then half of that budget is for animation. MPC took a loss on the movie, you know, so they should be celebrated.

If I could do it with unlimited time and unlimited budget, of course. I mean, I was trying to honor the legacy of all these things. When I could use an artist that really worked on “Roger Rabbit,” which we had, he really hand drew it and when I could use a legacy voice like Charles Fleischer came in and did the voice for Roger Rabbit. And I got to be in the studio with Charles Fleischer doing Roger Rabbit. It was the thrill of a lifetime.

So yes. Chip should be 100% hand drawn 2D, there’s no question about it. That was our intention and our goal. And at the end of the day, it was like, we could either make the movie the way we made it or not make the movie. That was the difference. It was not a small difference in money. It was like a $20 million difference and a one-year difference. It’s 900 shots. And when they would be ready to start animating them would be at the end of my process once I’ve locked.

According to the internet, when “Roger Rabbit” came out, it was the most expensive film of all time and it had taken like four times longer than it was supposed to. But they didn’t have an option to go do something else; they had started and now they had to finish it.  This movie, according to what I read online, our budget was around the same as “Roger Rabbit.” But today, not counting for inflation, the same number, you know what I mean?

A lot of the stuff once again, is true 2D hand drawn, because when it’s one or two shots, it’s cheaper to do it the right way than it is to make a 3D model. And they did beautiful awesome work like Flounder looks perfect.

From a story standpoint, does this place in the same universe as “Who Framed Roger Rabbit?”

I mean, “Roger Rabbit,” as I’ve been saying is the gold standard, obviously. There’s a reason just financially, as we’ve already discussed, why that can’t be quite recreated the way it was done, obviously, if it was the most expensive movie of all time. It’s so good and it holds up. I wouldn’t be so bold as to say we’re in the same universe or not, I would just say, we were thinking it’s 1990. These guys are at a party, they’re at the height of their fame. Who is the coolest people to have at your party in 1990? We’re like, Well, Roger Rabbit’s there. He’s doing the Roger Rabbit, which is just a combination of everything from my childhood coming together. And then MC Skat Kat, we’re like, Who would be a cooler DJ to have at your party? That’s a real status symbol to have MC Skat Cat, and Paula Abdul DJing your party. That’s how we put it in. We’re always aware of “Roger Rabbit” looming but we wouldn’t be so bold as to be like, can we be in the “Roger Rabbit” universe?

“Who Framed Roger Rabbit” also had Steven Spielberg greasing the wheels of the studios, which you did not have now. How hard was it to get approvals for these characters?

There were as many no’s as there were yeses, but it was super important to me to get the third-party stuff in there. It’s not lost on me how special “Roger Rabbit” is because it mixes all those things, all the characters from different places. And if this is going to be as close as I can get to a love letter to animation within our budget, then it’s not a love letter to animation if it’s only a love letter to Disney Animation. And then the more cynical audience members can also look at it as an advertisement for Disney+.

That was not the script I read, since it had things from all over the place. And I read it as that way visualizing it. They’re not the same ones that ended up in our movie necessarily, because over the course of making it, the story changes, the characters changed, everything changes. But it was in the spirit of what Dan and Doug wrote. And it’s what we all wanted to make. And so we just never veered from it.

I know that most movies don’t get to this stage and have the director being like, “I’d really like to send a special shout out to the lawyers.” But in this one is genuine, because the Disney lawyers, the amount of time they had to spend on this, compared to other movies is, I can’t imagine. They had to truly embrace what we were going for, because they’re the ones that ultimately had to get us. It was a lot of work for these lawyers to make those calls.

And then I would either do the presentation of like, “Here’s what the movie is,” and try to sell whoever was in charge of these characters to let them license it to us. And you know, it was super nice of everybody to say yes, and then and then on top of that a lot of them, I would always try to get them to send us the characters, if possible, so that it would just look right. And so sometimes they could do that. There’s a bunch of those in there where people did it for us.