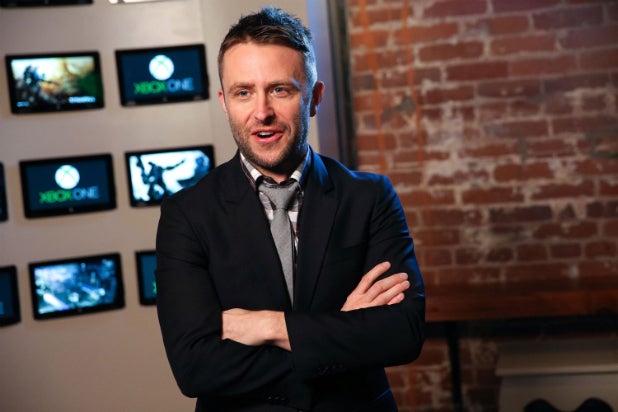 There was a time all Chris Hardwick’s energy went into video games and drinking. That’s changed.

He tweets all day to his 2.2 million followers @nerdist and hosts everyone from astrophysicist Neil deGrasse Tyson to actor Aaron Eckhart on his daily Nerdist Podcast.

But for Hardwick, the route to success was anything but direct.

Hardwick sat down with TheWrap to talk about his newest show and the years of rejection that he fought through to redefine his career – and his life – on his own terms.

Chris Hardwick’s television career started with what was probably any young 20-something’s dream job: a gig hosting a talk show about sex and dating on one of the most popular networks among the demographic.

“Singled Out” ran on MTV for just three years, from 1995 to 1998, and introduced the world to two of the ’90s favorite ditzes – Jenny McCarthy and Carmen Electra.

“At the time it was very hard to go off and do other things from MTV, because no one really took you serious. What else do you do with like, ‘Oh, I host a weird game show about boobs and wieners!’ or ‘I’m a VJ!’ What do you do with that?”

The UCLA grad turned to standup comedy while trying to find a TV gig that would stick. In the meantime, Hardwick turned to alcohol.

“I started to realize that I was becoming a drunk guy who used to be on television, which I never wanted to be,” Hardwick told TheWrap.

“I was drinking all the time and eating pizza at three o’clock in the morning – and I just generally looked sad. And so I said, ‘I don’t want to be that guy, and I feel like it’s not too late for me to turn that around.'”

“I realized that I had this weird, unnatural ability to focus on something – at the time it was video games and drinking – and so I said, what if I shoved all that aside and then just refocused that [energy] on reconstructing my life and my career… and kind of used that nerd part of my brain to basically just try to conquer it as best as I could, as if it were a video game,” Hardwick said.

It was then, in 2003, that the early inklings of what would eventually become Hardwick’s Nerdist media empire came to light.

“I said, okay wait a minute. I have all this experience hosting television shows, I’m a comedian, and I love all this stuff, that was traditionally considered to be like nerd stuff – which, before then, there was no real place for in the entertainment business because the audience was considered too niche.

(Pictured left – Hardwick’s comedy guests dutifully remind him of his old MTV days – and that haircut – on a regular basis.)

“I was tired of getting kicked around by the entertainment business which clearly was not interested, so I said, look, I’m going up for jobs that I don’t even want and I’m feeling bad about myself for not getting them; I’m at least going to just pursue stuff that makes me happy,” Hardwick said.

Nerdist Industries was founded in 2008 and now generates a podcast (hosted by Hardwick), has its own YouTube channel, and features blogs and news stories from dozens of contributors. The site became a subsidiary of Legendary Entertainment – itself a comic-book and sci-fi oriented production company – in 2012, just four years after Nerdist was founded.

“It was just constantly building outward like a rubber band ball and just connecting everything, which, as a meta-game I really loved,” Hardwick said about Nerdist’s rapid growth.

“That’s just how my brain works,” Hardwick, a child of the first wave of console gaming, said.

“And that’s why I get so excited about it, because there is like an achievement-reward system as well that comes with it. I just kind of made the conscious decision like, I think I can apply these principles to life.”

It was as much his determination to rebuild his life and career through sheer force of will as his nerd bona fides that made the 42-year-old Hardwick a hero among his devoted fans.

“Content is ultimately the most important thing to people. As long as the content is good, they’ll find it, and they’ll pass it around, and you can just make the thing that you love.”