In documentary footage released to the House Select Committee to Investigate the Jan. 6 Attack on the U.S. Capitol, former Pres. Donald Trump called members of the mob at the Capitol “smart,” and offered no condemnation of the violence that occurred.

Alex Holder, a British filmmaker who chronicled the final weeks of the Donald Trump presidency, released footage under a committee subpoena, in which he asked Trump to talk about the Jan. 6 Capitol riot.

“Well it was a sad day, but it was a day where there was great anger in our country,” Trump said in the film. “People went to Washington primarily because they were angry with an election they think was rigged. They were angry because they’re smart.” 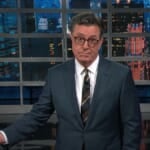 Holder is releasing the three-part documentary, “Unprecedented,” this summer under his company, AJH Films. He is complying with the congressional subpoena, providing video footage of interviews with Trump and his family and staff members.

During an interview with Holder, Vice President Mike Pence received an email with the congressional draft resolution demanding that he invoke the 25th amendment to remove Trump from office.

The 25th Amendment to the U.S. Constitution grants the vice president, with agreement of a majority of cabinet secretaries, authority to declare the president unfit for office.

In the video interview, Pence reads the e-mail on his phone, says “excellent,” then asks a staff member to “print me off a hard copy for the trip home.”

Pence then tells Holder “I”m always hopeful about America. I always believe that America’s best days are yet to come.”

The three-part documentary was acquired by Discovery+ last year and will get a summer release on the streaming service. 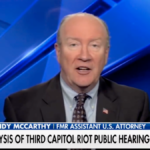