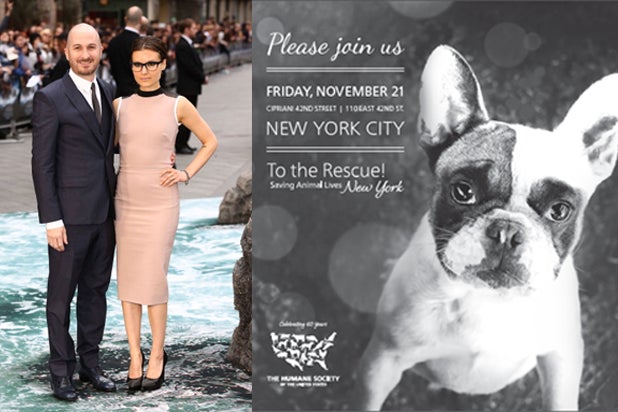 Aronofsky with Brandi-Ann Milbradt at the London premiere of "Noah" in March, and the invite for November 21. (Getty Images; HSUS)

“Noah” director Darren Aronofsky will earn honors from the Humane Society of the United States at their “To The Rescue! New York” event on November 21.

The animal actor on the invitation to the bash at Cipriani’s 42nd St. is worth the price of admission alone (top). The hotspot will be cooking up vegan meals on the Friday before the traditionally un-vegan Thanksgiving holiday.

“When I started working on ‘Noah,’ an early question was how to express the vastness and complexity of the animal kingdom on the big screen,” Aronofsky said in a statement to TheWrap.

Jennifer Connelly (“Requiem for a Dream,” “Noah”) and Natalie Portman look on as Aronofsky received an award at the Woodstock Film Festival on Saturday night. (Getty Images)

“It was quickly apparent that working with live animals would be dangerous for them,” he continued. “It was also morally ambiguous considering we were making a film about the first naturalist, Noah, who saved and cared for all the varied species on the planet.”

“Noah” has grossed $359 million worldwide since opening back in late March.

The HSUS’ Animal Rescue Team is an on-call group that goes beyond traditional rescues from puppy mills. They also investigate and work with law enforcement to save animals from fighting rings and hoarders as well as lobbying for stronger animal protection laws. Past participants on the team have included Matt Lauer and Mayor Michael Bloomberg.

“Darren’s ingenious film is a testament that animals can remain a cornerstone in entertainment without their welfare ever being put in jeopardy,” said Michelle Cho, vice president of the Los Angeles office for the HSUS. “The worldwide box office success of ‘Noah’ proves that audiences find digital animals just as effective in storytelling.”

Prior to “Noah,” Aronofksy’s “Black Swan” had extensive use of CGI not just in star Natalie Portman‘s winged transformations, but the scenes of her psychological breakdown.

Aronofsky will also be in New York later this week for the “Produced By: New York” conference, speaking alongside Harvey Weinstein, James Schamus, “The Grill” speaker Morgan Spurlock, and Jake Gyllenhaal on October 25.