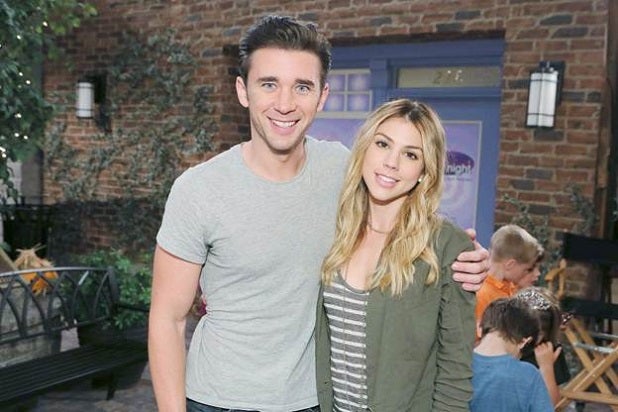 Watch out, Salem: Chad DiMera’s back in town, and he’s ready to take over. Or at least he thinks he is.

The Sept. 12 episode of “Days of Our Lives” brings the introduction of new cast member Billy Flynn in the role of Chad DiMera, who’s been absent from the NBC soap for the past year.

To hear Flynn tell it, DiMera’s coming back a very changed man. After falling under the influence of his father Stefano, Chad has embraced the power of his birthright, and is intent to take what’s his, by any means necessary.

Also read: Shemar Moore Returning to ‘Young and the Restless’ This Fall

“With Chad coming back, everything is a chess game, and everyone in Salem is a pawn,” Flynn told TheWrap during his first interview since taking over the role. “He’s going to use anybody he absolutely can.”

During Flynn’s interview with TheWrap, the actor discussed what it’s like taking the role over from Casey Jon Deidrick, the perils of fan expectations and what Chad has in common with Prince Harry.

TheWrap: You’re a relative newcomer. How did you end up landing the role of Chad DiMera?
Lots of tears. No, I moved here about three and a half years ago. I have a finance degree, I got a job at Warner Bros. I worked there for about a year, but as I was working there I started training with an acting coach because it’s what I wanted to do … When I got this, it was like three years to the day after I moved here. I had three auditions, and I finally got it. It was a crazy process, because the audition call was for so many people. I think I was the second round. I think they tried to cast it once, didn’t find anybody, and then brought in another 400 guys, and I was in that group. And then I finally tested for the network and I tested with Kate Mansi, and they offered it.

You’re taking over the role from Casey Jon Deidrick. Were you familiar with his portrayal?
I wasn’t. I made sure to learn his story and I had an idea of how he played it and who he was at the time. Luckily enough, there was such a dramatic event that happened in between the recast, it gave the character a reason to be so different. But I definitely knew who he was in my process of auditioning and stuff like that.

So you don’t feel the obligation to bring anything over from Casey’s portrayal?
No. I mean, Casey was such a loved actor, and his Chad was a really loved character. That Chad had a really big heart. I’ve tried to carry that through, but everything else has changed so much. It’s a much different Chad than it was before.

What are the changes that you’re bringing to the role?
Well, he got shot and he left, and he’s been spending all this time with Stefano. Who, you give Stefano 10 minutes with any one of his children, and he can pretty much eradicate any goodness that person has. But he spent a lot of time with him, and he finally embraced his name, which the old Chad was kind of in the process of doing, but he was having a hard time doing it. EJ was a big mentor to him at the time. When he left and he was with Stefano, I think he found himself. He got used to the power, he saw what the name could do. He was away from everything in Salem that was sort of making him … he had a whole lot of girl drama when he left, and I feel like getting away from that he was able to focus on himself. So he comes back more of a man, a strong DiMera. And in the first episode when he comes in, he sort of shows that in a really big way by taking on his brother.

So Stefano’s played a big part in his transformation?
I think Stefano was grooming him, is the way I looked at it. The way I’ve always kind of said it, he kind of reminds me of Prince William and Prince Harry. EJ’s kind of Prince William, and Chad DiMera, as he comes back, he’s the kind of guy who will end up on the cover of TMZ naked and getting into trouble. He kind of comes back like that — he’s charming, he’s witty, he’s sarcastic. He’s still kind of becoming a man. He comes back, he decks a very prominent family member in the face to let him know that he means business. We kind of find out where Chad’s loyalties lie through the first two weeks of the journey, which are pretty much to himself now. The way I look at it, much like Stefano, everything’s kind of a chess game. With Chad coming back, everything is a chess game, and everyone in Salem is a pawn. He’s going to use anybody he absolutely can. He’s come back in the picture and he’s ready to assert his place as a prominent member of the DiMera family.

Guy Wilson, who plays Will Horton, also recently took over his role from another actor. Did he have any advice for you as a fellow recast?
No, not really. We just kind of talked about the kind of things that people were going to say upfront, which I kind of expected. A lot of people really loved Casey, so they were going to be unhappy with me, which is fine. But actually there’s a few people out there who aren’t too happy, but I’ve felt a lot of love so far.

It’s tough, because fans of soaps are so loyal to a particular actor.
Very loyal, yeah. But it’s fun. For me, coming in and playing a DiMera, especially the way he is now … he’s every bit of the bad boy like I feel that a show should have. He’s charming and he’s witty and he’s sarcastic and he’s smart, and he’s kind of no-holds-barred, but at the same time he does still have that heart of gold. He is still Chad. He’s just an improved version of him, which is really fun to play because there’s really no boundaries. The range is all over the place. There’s so much room to play with, because there are still things that really hurt him. He was in love with Abigail. The stuff with his brother broke his heart, because when Chad left his brother was taking him in as part of the family. He was getting used to that. EJ would tell him things like, “You know, you’re really lucky to have Abigail. She’s a great girl.” Then he blackmailed Chad into moving back into the mansion. And then with Abigail — there’s all these things with her. When he found out that this person that he looked up to as a mentor slept with the woman he loved, it broke his heart. He covers that with a lot of rage and a lot of anger, but you will still see the hurt. Which is nice, because you can play that, but then you just get to play the badass who gets to come in and not take any crap from anybody. I feel like that’s what brings him back to town, and you’re going to see him, at least for the first couple weeks, dealing with the family and how is he going to fit back into it, especially being ina place where he doesn’t want to be the Harry anymore. He wants to be king. Not that he’s ready.

Does Chad have plans to break up Abigail and Ben?
Um, we’ll see. I think … I don’t know I don’t know what I can say on that aspect. But yeah — the feelings with Abigail run deep.

Have you and Kate Mansi clicked well?
I love Kate. Like I said, I tested with her, so she was the first friend I made on the show, and she’s been really great. We work really well together. Same with Alison Sweeney. She was really fantastic. She’s amazing; I mean, it’s really easy to work with her, it’s really easy to get a crush on her.

The DiMera family is in this state of upheaval as you’re coming back in — some members have gone. Is it basically up to Chad to rebuild the family?
I think Chad definitely has an agenda on how to regain strength with his family. But as far as where his loyalties are going to lie, you’ll see who he aligns himself with to make that happen. It’s gonna be the number one person is himself. He’s gonna get the family back, and he maybe promised one thing to one person and another thing to another person. Either way, I think he’ll get what he wants. But yeah — he is gonna regain the DiMera name, the DiMera family. He’ll put everything back together, for his own purpose. But it’s Salem, so we’ll see how long it lasts.

Chad had been reluctant in the past to get involved with DiMera Enterprises. Will that change at all?
I don’t know what I can say to that, but I will say he is a DiMera, and he wants everything that a DiMera deserves. And that’s really the way that he’s looking at it now … He wants what’s his, so he’s gonna manipulate some people to get it.

See video: Alison Sweeney Leaving ‘Days of Our Lives': I ‘Have Worked So Much’

Soaps have a ton of dialogue, and the pace is pretty hectic. As a newcomer, has that been a big adjustment?
The pace is insane. My very first scene was with James Scott, EJ, when I come back into town, and I could not have been more nervous. I mean it’s the first big show I’ve had, but definitely the first lead I’ve ever done, obviously, and that was pretty insane. But after about three days you sort of fall into it, because it’s just kind of work. And I was doing a lot of shows, and I came back in a big way. Now it’s just kind of a process. You get your lines. Me, personally, I try to keep things loose in the moment. I don’t know what the other person’s lines are, so the first time that they say it is the first time that I hear it. It’s kind of like live television — you truly get to live moment to moment. It’s tough, because you are moving so fast, and sometimes you might not be happy with it. But I feel like, as an actor, you get to jump into something and you get to make a choice. And either the choice works or it doesn’t, but you go for it in the moment and whatever the next moment is, it keeps  building and building, and then you walk away. And you could sit on it and feel good or feel bad, but either way, in about 15 minutes you have to move on to the next one.

Anything else that we should know about the new Chad DiMera?
Chad is very much a DiMera now. He’s a different person, he’s grown up. He’s trying to figure out where he fits in Salem. He’s coming back, he knows what he wants. He knows, in a way, who he’s going to use to get it. And the rest is kind of just, kind of see what happens. And he’s probably going to piss off a lot of people.