One of the planes of existence in “Doctor Strange in the Multiverse of Madness” features a swirling vortex that has a definite resemblance to the Everything Bagel in “Everything Everywhere All at Once,” and it’s an unfortunate coincidence, as the Daniels’ boldly inventive indie movie explodes with wit and nerve and character – most of which are prominently missing from this latest MCU adventure.

The follow-up to 2016’s “Doctor Strange” hits the ooh-and-aah marks we expect from a well-crafted Marvel adventure, but even with Sam Raimi at the helm, this entry goes heavy on the spectacle but light on the humanity.

Raimi’s success with the original “Spider-Man” trilogy laid the groundwork — for better or worse — for the contemporary wave of superhero sagas, and while his brand of visual flair and scary-funny jolts serve the material well, the screenplay by “Loki” creator Michael Waldron piles on so many alternative universes, new characters, and books of spells (both good and evil) that there’s no breathing room left.

(In the first movie, Dr. Stephen Strange goes on a hero’s journey; this time, he basically learns what not to do from the mistakes of his interdimensional doppelgängers.) 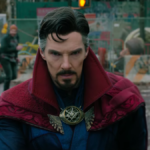 “Multiverse of Madness” is a sequel to “Doctor Strange,” with the ex-Sorcerer Supreme (played by Benedict Cumberbatch) taking on a new threat to reality itself. Viewers should probably also be up on the Disney+ series “WandaVision,” in which Wanda Maximoff (Elizabeth Olsen) used her own magic powers to create an artificial reality in which her husband Vision had not died and the two of them had a pair of adorable sons in a sitcom-perfect suburb.

Strange’s hubris opened up a part of the multiverse in “Spider-Man: No Way Home,” and now that multiverse lands on his doorstep in the form of America Chavez (Xochitl Gomez, Netflix’s “The Baby-Sitters Club”). This teenager first appears in Strange’s dreams — where he fails to save her, or himself — and then in the middle of Manhattan, where she is being pursued by giant tentacled eyeball, a very Sam Raimi kind of kaiju. (Imagine a Madball designed by H.P. Lovecraft.) 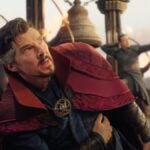 America, it turns out, is the only being who can hop from universe to universe, only she has no idea how to control it. (It kicks in only when she’s afraid for her life.) Naturally, it’s the kind of power that should never fall into the wrong hands, so of course the wrong hands are doing everything possible to take it for themselves, leading America and Dr. Strange to universe-hop until they can figure out how to protect the girl and her abilities. (If this sounds vague, it’s because this review is intended to be as spoiler-free as possible.)

The powers of Doctor Strange (as manifested in his first film and subsequent appearances in other Marvel projects) allow filmmakers to create M.C. Escher–esque kaleidoscopes of collapsing reality, and Raimi absolutely takes advantage of the opportunities to send everyone and everything on screen helter-skelter. There’s a memorably trippy montage of Dr. Strange and America falling through universe after universe, with different styles of architecture, cinematography (by John Mathieson, “Detective Pikachu”), and even the physical makeup of the characters themselves. “Multiverse of Madness” is at its best in those all-too-rare moments when that madness comes through, with Danny Elfman’s spot-on score offering just the right support to both the heroics and the trippiness. 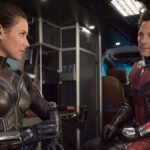 Also Read:
‘Ant-Man and The Wasp: Quantumania’ and ‘The Marvels’ Swap Places on MCU Release Calendar

“Doctor Strange” introduced us to a character who is brilliant and arrogant, a man who loses everything he has but reinvents himself, transforming from a legendary surgeon to a master of the mystic arts. The good doctor doesn’t get nearly as much to play this time around, apart from some mooning over his failed relationship with Christine (a returning Rachel McAdams), and while America seems like a potentially interesting addition to the MCU, she spends so much of this movie either in active distress or delivering exposition that we don’t get much of a sense of who she is at all.

(Most of the other cast spends their time yelling out plot points — with the notable exception of the reliably droll Benedict Wong — which leaves time to notice the series of terrible wigs Cumberbatch is forced to wear as various iterations of Stephen Strange.)

Raimi die-hards will enjoy his puckish sense of amusement at the liberties he’s allowed to take with ground rules and with gravity (not to mention his fleeting shout-outs to classic films like “Spellbound” and “The Defiant Ones”), and Marvel fans will come away thrilled with hints as to where this mega-franchise might go next (and who it might include as it does so). But there’s a level of human drama missing from “Doctor Strange in the Multiverse of Madness”; the surface of this Everything Bagel is loaded with ingredients, but it lacks a certain flavor.

“Doctor Strange in the Multiverse of Madness” opens in US theaters May 6.