There are tons of surprises in Marvel Studios’ “Doctor Strange in the Multiverse of Madness,” a giant movie that has the unenviable task of being a sequel to the original “Doctor Strange” standalone film (released way back in 2016), a follow-up to the enormously successful “Spider-Man: No Way Home” (which heavily featured Strange) and a second season of sorts to “WandaVision,” the inaugural Marvel Studios series for Disney+ that aired more than a year ago.

In “Doctor Strange in the Multiverse of Madness,” directed by the one and only Sam Raimi, Strange (once again played by Benedict Cumberbatch) starts to unravel a mystery that could impact not only his world but all of the worlds, leading him to team up with psychically powered orphan Wanda Maximoff aka Scarlet Witch (Elizabeth Olsen) and MCU newcomer America Chavez (Xochitl Gomez), who has the power to open star-shaped portals to other universes.

Perhaps the biggest surprise is saved for the end, during the movie’s credits. But if you were befuddled as much as you were dazzled, we’ve got you covered. Ready to delve into this magical reveal? 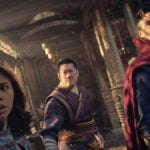 Major spoilers follow, seriously turn back now. Unless you don’t get a fig about spoilers. But hey man that’s on you.

Yes, Charlize Theron Is Part of the MCU Now

Let’s just get this out of the way: Charlize Theron is in the Marvel Cinematic Universe. And this was without a press release or splashy announcement. That is huge. Theron is one of the world’s biggest movie stars. Unlike the rumors that Tom Cruise would be coming to the MCU as an alternate universe Tony Stark, the similarly star-powered Theron was never rumored for anything and yet here she is.

It’s both shocking and huge – an “is-this-really-happening” moment in a movie full of them.

In the last few years, Theron has appeared in two “Fast and Furious” movies (and will be seen in one more), two “Addams Family” animated features and big action movies that also garner a strong critical response like “Mad Max: Fury Road,” “Atomic Blonde” and “The Old Guard.” With that in mind, Theron being in the Marvel Cinematic Universe does make a certain amount of sense. But still: Charlize Theron is a part of the MCU. Hell yes.

Was There Any Pretext for Charlize Theron Showing Up?

Much of “Doctor Strange in the Multiverse of Madness” involves Strange and America Chavez trying to solve a mystical problem by visiting several different universes, trying to avoid the witchy pursuit of Wanda (yes, she’s the big bad in this one!), who wants to reunite with her estranged children. They visit so many different universes, including ones with innocuous differences like stoplights where red means go and where people eat meatballs with their hands like freaks, to more sinister lands like one where Doctor Strange is a bad guy, his soul corrupted by dark magic.

By the end of the movie, honestly, anybody could probably step through a portal and you’d probably buy it. While “Doctor Strange in the Multiverse of Madness” doesn’t specifically set up who Charlize Theron is playing and why she makes her debut minutes into the closing credits of the movie, it does establish that anyone could show up. And as it turns out, anyone happens to be Charlize Theron.

Who Does Charlize Theron Play?

Theron appears, wielding a big magical sword (one that can tear a hole through universes) and wearing a pretty witchy get-up. She is definitely not of this earth. She tells Strange that his multiverse shenanigans have caused an “incursion.” Earlier in the movie we’ve learned that an incursion can happen with multiverse travel; it could lead to one or more universes completely collapsing in on themselves. Another universe’s Strange caused an incursion and their ruling group of superheroes, known as the Illuminati, straight-up murdered Strange for the offense.

If Theron is just asking for Strange’s help, that’s a big plus! We couldn’t see our version of the beloved hero taken out for his crimes against the multiverse.

But who is she? As it turns out, Theron plays Clea, who was created by Stan Lee and Steve Ditko. The character first appeared in “Strange Tales” issue #126, published in November 1964 (groovy). And she has been on film before, actually, and was played by Anne-Marie Martin in the 1978 television movie/backdoor pilot “Dr. Strange” (yes it was actually spelled like that).

In the comics, she is from the Dark Dimension and is the niece of Dormammu, the big scary monster that Doctor Strange faced down in the first film. (Remember when Strange does that time travel thing and basically annoys the big monster to death?) While she appears human she is very much not. Also: she eventually marries Doctor Strange and, following last year’s “Death of Doctor Strange” comic book event, she actually became the mainline Marvel continuity’s Sorcerer Supreme. She even got her own comic book, simply titled “Strange.” 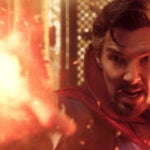 What Does Clea’s Appearance Mean for the MCU?

As is evidenced by the above, Clea’s arrival in the MCU means a few things.

One: it complicates the Doctor Strange character, who until now has had a long and somewhat tortured relationship with Christine Palmer (Rachel McAdams). Christine gets married in this movie, which sends Strange along an existential quest that runs alongside his adventures hopping between (and through) universes with his new teenage sidekick. Does he somehow know that Clea is his one true love? Does she know? Has she been traveling through time as well as parallel universes?

It also, hopefully, means that McAdams will be relieved of the largely thankless task of trying to do something interesting with Christine. While she is marginally more important in “Doctor Strange in the Multiverse of Madness,” including working alongside the Illuminati in one of the parallel dimensions, the two “Strange” movies haven’t properly utilized everything that McAdams could bring to the role. And it seems like the MCU has no intention of turning Christine into the Night Nurse, a moniker assumed by several different characters (including Christine).

Clea’s appearance also means that there is some kind of threat that requires both her and Strange to combat and, we’re guessing, will once again threaten the survival of the entire multiverse. (Somebody tell Loki and the gang at the TVA!) This might be a case of setting the stakes unnecessarily high, but this could also establish impending doom like the way that Thanos first made a cameo at the end of “The Avengers” back in 2012. Clearly, the multiverse is going to factor into whatever the next big MCU “event” will be (remember that “Loki” has already pointed towards an all-out multiverse war). And this is one small piece of a much larger puzzle.

Also of note, at the very end of the credits, four words appear: “Doctor Strange will return.” He’d better. He’s got a big mess to clean up.