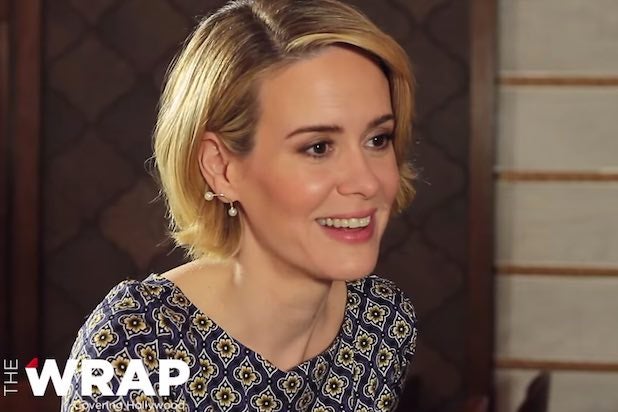 “American Horror Story” star Sarah Paulson is busy preparing to play a brand new character in the next installment of the FX miniseries, but she hopes her “AHS: Freak Show” characters Bette and Dot Tattler won’t soon be forgotten.

And with a 2015 Critics Choice TV Award already under her belt for the role, it’s hard to imagine Paulson’s performance will escape the attention of the Academy of Television Arts & Sciences, which has twice previously nominated her for an Emmy for her work on the horror drama.

Only time will tell if Paulson will finally get to go home with a trophy in hand this year, but if she does, it will be particularly meaningful, since she considers playing the conjoined twins the most difficult role she’s ever tackled.

Also read: Jessica Lange Reflects on Her 4 'American Horror Story' Femme Fatales: 'They Have a Spine of Steel'

“It’s no question, just because for me it was also a lot of acting on my own with myself,” Paulson told TheWrap while taping of a recent “Drinking with the Stars” episode. “And when you’re not looking at anything, but kind of cocking your head to one side and imagining your own eyes looking back at you, it takes a very big imagination. I had to kind of [have] a lot of faith. It was really scary.”

Paulson talked at length about the challenges she faced while bringing the character life, how weird it is to work with a fake identical head strapped on, and which “AHS” season has been her favorite.

TheWrap: Let’s talk about “Freak Show.” Because I know there’s something you want to correct people’s opinion about, you play Bette and Dot Tapper.
Sarah Paulson: I do. I play them both. There’s not an animatronic puppet playing the other part. I sort of think that there’s been a misconception that because I did, in fact, wear an animatronic head that looked exactly like me — I had to do a life cast that was totally terrifying, you feel like you’re suffocating.You’re in there for half an hour, covered in paper mache that’s just getting wrapped around you

Oh, God. Are you claustrophobic at all?
Yes. Anybody would be. You feel like you’re being buried alive. It’s awful. So they made this puppet essentially. They made two, one for Bette and one for Dot, that I would wear only when the camera was high and wide, so you can see the body completely with both heads without having to do any special effects, which are very expensive. And the show is already an expensive thing to produce, so when Ryan decided to do this, they had to think of a way to do it where they could sometimes shoot across both heads, so having a puppet that was exactly crafted to look exactly like me. Which, I have to tell you is really horrifying because when you look in the mirror, you’re seeing yourself reflected, but when you’re seeing a puppet that has been made to look exactly like you down to every freckle and mole, you’re actually I think seeing what everyone else sees when they look at you. Because it’s seeing yourself outside of yourself, if you know what I mean? It’s beeping weird, I have to tell you.

I would just be more worried that like one day the puppet would just start talking and just like Chuckie-style.
Believe me, I did a big joke every time I had the puppet on where I’d always talk to it. Like, “Why are you so quiet? I don’t understand why you don’t talk.”

You should’ve learned ventriloquism.
I could have, but you know I have enough. Thanks very much, but I have enough on my plate. I have to do two completely — you know, girls that shared a body but had very different personality. I would wear an earwig so that I could come in in the morning and pre-record my dialogue so that I will have played both girls. And I would switch the earwig so that when I had conversations with myself I was listening to my own voice. And you know, all of that stuff.

It sounds like, I would imagine, it’s your most challenging role to date.
It’s no question, just because for me it was also a lot of acting on my own with myself. I get obviously a lot of pleasure of acting with other people. Looking into other faces and eyes and you know acting is really, for me anyway, about listening and responding. And when you’re not looking at anything, but kind of cocking your head to one side and imagining your own eyes looking back at you, it takes a very big imagination. I had to kind of [have] a lot of faith. It was really scary. I had never done it before. It has not been done this way before.

So did you have reservations about playing the character at all?
I certainly didn’t. I had reservations in my ability to pull it off, for sure. Because I thought “How?” I really didn’t know how I was going to do it. And so much of it was — there was so much of a technical reality to the part that I have never experienced before in terms of I had to hit every mark exactly and then position my body in such a way that it was slightly off the mark so that when I came in playing the other character I could lean my body in the opposing way. And so it was just a lot of my brain was working in a way that my brain just doesn’t actually work. It just — it almost felt that I had to become a mathematician and just being very physically aware of my body in a way that I’m not normally. In terms of having to shift my ribcage over when I was playing Bette and shift it more center when I was playing Dot. It was like patting your head and rubbing your stomach and running down the street and trying to solve an algebra equation all at the same time.

So you you created two distinct physical characteristics for playing those characters. Did you have any others that you did?
Well, no. I mean, I think with Dot I kept thinking how because she was much more sullen and sort of cynical, darker soul, my body would end up getting more compact when I would play her. My face, my neck, everything got kind of smaller. When I was playing Bette, I had one head tilted to side. She was much more open and so I would have my face felt more open, my body felt more open. I actually had them create what I would call the buttress, which was a piece that fit under my arm that I would switch to whichever side I was. If I was playing Bette I would put it on my right side, so I would remember spatially that I had another person attached to me. Because if I didn’t have that, I would — it was very hard for me, particularly in the beginning, to remember that the width of their bodies were different, their arms swung at different paces. I had them build up one side of my shoe higher so that I could remember.

A lot of work that went into pulling that character off.
It was a lot of work and I’m an actress, not a brainiac for God’s sake. It was very challenging.

Did you have a favorite sister to play? Did you like one role over the other?
I liked them both because I feel like they’re two sides of that person and everyone, and certainly in me, the part of me that can be very playful and kind of juvenile, which was Bette. And the other person that’s sort of cynical and cigarette smoking and just like, “Everything’s terrible.” I feel like I can be both of those gals. They both live in me, so it was a kind of yin and yang quality. I think it was sort of more fun to play Bette because she was more open and I found somehow that my emotions were more readily available to me in emotional scenes as Bette because I wasn’t so shut down. She was just a sort of very open person. So all of a sudden if I was supposed to cry in a scene, it just happened because she was–. It was an interesting thing to take that part of me that is a little more shut down in the way that you are as a human being in the world to protect yourself from the horrors that come to you during the day–to let some of that go and having a more open sense of yourself brought a lot of things out of me that I wasn’t aware I could do. It was hard.

Do you look back on any season more favorably than others in terms of just the experience?
Well Season 2 was a very special season to me because I felt very attached to that character of Lana Winters. She kind of became the heroine of the show by the end and yet she was very flawed and her ambition got the best of her some times. And I liked that I wasn’t playing a heroine that only had everyone else’s best interests at heart. She was self-serving sometimes and I thought it was very human for the writers to depict her that way and therefore very freeing as an actor to not worry about playing someone that needed to be liked or loved by the audience and I just you know didn’t have to think about those things so much. I don’t think you should ever think about those things, but sometimes they’re written into the material where you can tell that they want to engender goodwill from the audience to your character. I didn’t feel that so it was very freeing and liberating as an actor to not be thinking about that kind of stuff. She’s a very strong character, she’s the only survivor of that season, I like that.

Do you think that’s important? You hear a lot that, “Oh, this character’s not likable enough.” Do you think that matters or that audiences are smart enough where they don’t need “like” a character?
I do think there’s more sophistication to audiences than people give credit to. At the same time, I definitely have had experiences — not on ‘American Horror Story’ at all, that’s one of the more exciting things about being on it. I don’t think anyone’s thinking about trying to be likable. I think that’s death as an actor. Trying to be worrying about that because then you’re not going to be open to all of the nuanced things about playing a person that isn’t necessarily likable all the time. You don’t like anybody all the time do you?

Of course not.
No, I mean even the person you love the most in the world can be frustrating and disappointing. I think it’s really interesting to have those kinds of characters depicted. And it’s certainly more fun to play them than to play the person that you feel has to be liked by the audience. And I actually think people are actually drawn to characters that they can recognize themselves in. Because everyone’s a narcissist and see themselves reflected back.