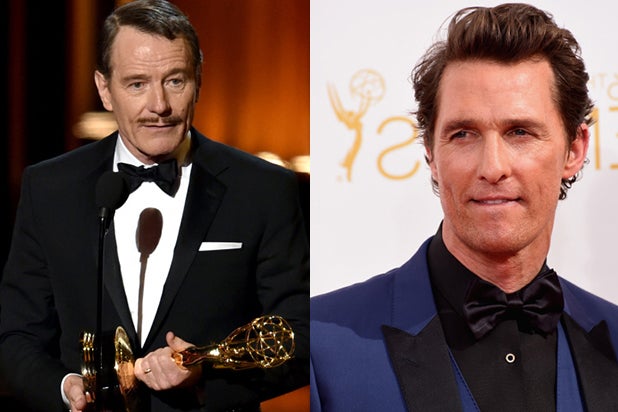 In a season of hot new shows, new distribution models, blurred lines between comedy and drama and an unmatched level of quality, voters in the Television Academy sent a loud, clear message on Monday night at the Nokia Theatre: Been there, done that. If we liked it before, we still like it.

Not even Matthew McConaughey, the lead in HBO’s “True Detective” and star of the night if you go by the number of people who name-dropped him from the stage, could get in the way of voters’ determination to give Emmys to people who already had them at home.

So on a night when McConaughey could have become the first leading male to win Oscars and Emmys in the same year, he instead sat by while Bryan Cranston won his fourth Emmy for starring in “Breaking Bad” (plus two for producing the show), the AMC drama whose final season made it the toast of the 66th Primetime Emmy Awards and gave it five awards in the seven drama-series categories.

“True Detective,” which surprised some Emmy-watchers by opting to compete as a drama series rather than heading for the less competitive arena of the miniseries, landed a single award, for Cary Joji Fukanaga’s directing.

And on the comedy side, “Modern Family” did the same thing it has done every year that it has been on the air: It won the award as Outstanding Comedy Series, in the process tying the record set by “Frasier” for consecutive wins in the category.

“The Amazing Race” won its 10th in the 12-year history of the Outstanding Reality-Competition Program category.

Certainly, it’s hard to quibble with the voters’ choice to salute Vince Gilligan’s brutal, brilliant and epic “Breaking Bad” at the end of its run. (It also won last year, as its final episodes were airing, but that victory officially came for the previous season.)

But the past year brought fresh shows like “True Detective,” “Masters of Sex” and “Ray Donovan” on the drama side, while pushing “Game of Thrones” to bloody new heights. In the comedy categories, it saw Netflix’s acclaimed “Orange Is the New Black,” the well-received “Brooklyn Nine-Nine” and HBO’s “Silicon Valley” enter the picture, along with daring new seasons of “Louie” and “Veep.”

And yet voters, faced with the fact that the shows and people they voted for in the past are still eligible, remained the staunchest creatures of habit anywhere on the awards landscape.

Every year, Emmy-watchers wonder if this will be the time when voters finally give some major awards to hotter, edgier shows, particularly in the comedy arena … and every year, the Television Academy tells them to wait until next year.

Sure, it wouldn’t be the Emmys without a few surprises. But even those surprises were on the conservative side: Andre Braugher from “Brooklyn Nine-Nine” and Tony Hale from “Veep” were considered frontrunners in supporting comedy actor category, but instead voters went for Ty Burrell for “Modern Family,” the show that has dominated the category in recent years.

The comedy awards proved that the genre is the last best hope for the broadcast networks, with ABC and CBS winning five of the seven comedy awards and keeping HBO from its first win (Louis-Dreyfus) until 46 minutes into the show.

And in truth, the cable giant didn’t have a particularly good night, with single awards going to “True Detective,” “Veep,” the TV movie “The Normal Heart” and “Sarah Silverman: We Are Miracles.”

Combined with its 15 wins at the Creative Arts Emmys ceremony, HBO was still the most-awarded network overall, but Monday was more of a night for AMC (“Breaking Bad”), ABC (“Modern Family”) and PBS/BBC, whose “Sherlock: His Last Vow” won three awards and kept “The Normal Heart” and FX’s “Fargo” from turning into the kind of forces they were expected to be in the movies/miniseries categories.

But really, this Emmys show will end up being seen as a grand parting gift to “Breaking Bad,” which spent its first few years watching “Mad Men” win every year but thoroughly overshadowed that fellow AMC series in its final two seasons.

Matthew Weiner’s “Mad Men” will get its last chance next year, when its final season will be eligible. And at that point, maybe voters will have grown tired of giving “Modern Family” co-creator Steve Levitan endless opportunities to make clever acceptance speeches – and maybe they’ll let some fresh blood into the comedy category, too.

But don’t count on it. This is the Emmys, where anything worth doing is worth over and over again.