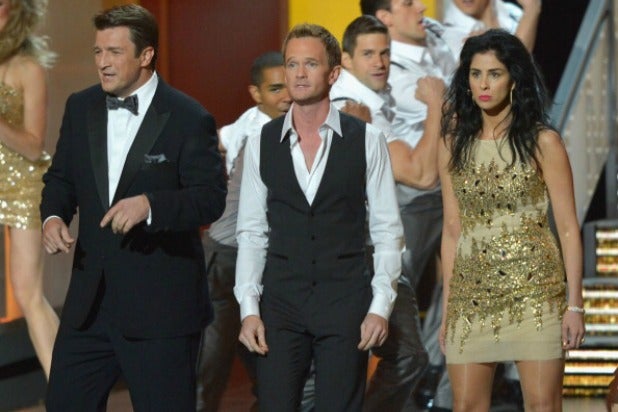 Emmy voters did almost everything they could to ruin the 65th Annual Emmy Awards. They handed too many safe prizes and gave some that were just wrong.

But the awards show overcame the awards themselves to be pretty watchable — if only for their weirdness.

The show was slowed down by some ill-conceived “In Memoriam” speeches. Despite some lovely moments, they fell short by not including the work of the artists being honored with a few clips. And highlighting some people for recognition seemed to shortchange others lost in the last year.

“This may be the saddest Emmys of all time, but we could not be happier,” said “Modern Family” co-creator Steve Levitan, accepting a very predictable fourth Emmy for Outstanding Comedy Series.

Maybe Emmy voters thought they were being daring enough by awarding “Breaking Bad” for Outstanding Drama Series. But don’t pat yourselves on the back too much, voters: You should have recognized it before.

All in all, the Emmys were OK. A few minutes too long, boring in places, but not awful. Host Neil Patrick Harris was quite good, as usual. I consulted a real-life viewer, my mom, on what she thought, and my mom nailed it: “He doesn’t make the show about him.”

That was clear from the beginning, when for his opening he shared the stage with Jimmys Fallon and Kimmel, Conan O’Brien and Jane Lynch. Kevin Spacey, Tina Fey and Amy Poehler contributed great jokes from the audience.

But Harris injected himself into the show at just the right time: First with a very funny skit featuring his “How I Met Your Mother” castmates, disguised as a PSA for “The Ryan Seacrest Center for Excessive Hosting Disorder.” And then with an out-of-nowhere mid-show dance number.

It was one of three strong musical numbers. One celebrating choreography — with “Boardwalk Empire” flappers clicking their heels and HazMat-suited “Breaking Bad” dancers — offered a welcome jolt of weird. And Elton John performed an understated but stirring tribute to Liberace, “Home Again,” a song from his new album.

Carrie Underwood’s performance of the Beatles’ “Yesterday” was part of  a segment that just didn’t make sense. Don Cheadle hosted the tribute to television’s coverage of 1963, including President Kennedy’s assassination and the start of Beatlemania. The Beatles were presented as a joyful counterpoint to Kennedy’s death. Why then did Underwood perform such a mournful version of “Yesterday,” a song from 1965, not 1963?

Also nonsensical: Many of the Emmy voters’ choices. My mom called it again when Jeff Daniels beat Bryan Cranston and Kevin Spacey for Outstanding Lead Actor in a Drama Series. “I like the ‘Newsroom,’ and I like him on it. But that was wrong,” she said.

Spacey laughed heartily as Daniels said the last acting prize he won was from the AARP. The laugh was proof that Spacey was the best actor of the night.

If the Daniels choice was too far out, others were too predictable. Emmy voters took the easy route when they gave yet more Emmys to “Modern Family,” Claire Danes, Julia Louis-Dreyfus and Jim Parsons. They’re all wonderful, but voters could have been more adventurous in at least one of their categories.

Voters do deserve credit for shaking up a couple of other races. “The Colbert Report” broke the 10-year Outstanding Variety Series by big brother, “The Daily Show.” And “The Voice” won for Outstanding Reality Competition, defeating perennial winner “The Amazing Race” and claiming a prize “American Idol” never could.

Those were welcome surprises. But many others weren’t.

“This just in – no one in America is winning their office Emmy pool,” Harris said two-and-half-hours into the show.

The “In Memorial” montage was lovely — it always is. But the mini-eulogies for stars including Jonathan Winters, Cory Monteith and James Gandolfini by their colleagues (Robin Williams, Lynch and Edie Falco, respectively) seemed to create a hierarchy of importance between them and people like Larry Hagman and Roger Ebert, who only appeared in the regular “In Memoriam” segment. Ick.

Credit where credit is due to Williams, however, for helping viewers understand the underrated Winters. He recalled how the comedian once drew a picture of hundreds of sardines being devoured by a whale. He captioned it: “This is what happens to conformists.”

Give the Emmys credit for one thing: They didn’t conform to anyone’s expectations.