Over the weekend something miraculous happened: the soundtrack for “Encanto,” Walt Disney Animation Studios’ 60th animated feature in nearly 100 years, became the #1 album on the Billboard 200. At the same time, “We Don’t Talk About Bruno,” the movie’s breakout song, was the #1 song on Spotify domestically (internationally, it was #19). While this might be a short-lived triumph (The Weeknd just debuted his masterful concept album “Dawn FM,” featuring narration by Jim Carrey, on Friday), it should be celebrated none-the-less. It feels like a true return to the early 90s heyday of Disney Animation, where there would be a hit single version of one of the songs on the radio (hello Peabo Bryson!) while the remaining soundtrack loomed large on the album charts. Of course, this time around, radio play has been replaced by online streams, and the entire enterprise has been buoyed significantly by “Encanto” showing up on Disney+ on Christmas Eve.

It’s with all of this in mind that we are running down every track (all written by the great Lin-Manuel Miranda) from “Encanto.” Does your favorite get the #1 slot? Can we finally talk about Bruno? And did Disney make the wrong move when it came to the song it submitted for the Best Original Song Oscar? Light the candle and keep reading to find out more.

There are a couple of reasons why this perfectly fine, perfectly beautifully little ditty lands at the last place spot. For one, it is essentially a reprise of “The Family Madrigal” with a different tempo. That’s okay (see below), but robbed of the original song’s punch and energy, it feels like sort of a bummer in comparison. And while it certainly deepens our understanding of Mirabel (the incomparable Stephanie Beatriz), it doesn’t do much to advance the plot (something that every good musical number should ideally accomplish). Instead, it just wallows in Mirabel’s sadness/otherness, which we already pretty much get. (The musical number itself, with Mirabel gliding through a flash-frozen version of a celebration, however, is genuinely stunning.) Again, it’s not a bad song, and its less-than-3-minute runtime is merciful and brief. If it had packed a bigger emotional wallop, it would have certainly advanced on the list. 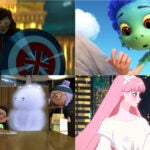 Here we are, at the final big number. This is, once again, a tone-shifted version of “The Family Madrigal,” which works better here because it is serving as a bookend to that song’s introductory nature. There are also major heartstrings-tugging moments with the various characters singing interludes (when Abuela comes in, get ready), including John Leguizamo cutting in for a verse that mirrors “We Don’t Talk About Bruno” and a touching moment when the townspeople join along. It’s hard to think of the movie ending any other way, and unlike some of the other songs, it advances the plot in so many ways, including (but not limited to), Bruno getting accepted back into the family, Dolores getting her man, and all of them putting the magical casita back together. This is all capped with Mirabel getting the doorknob and putting the house back together; this isn’t just a visual thing either. It’s all in the song. Quite a feat, indeed.

This energetic pop-rock number, between Mirabel and her too-perfect sister Isabela (Diane Guerrero), gets major points for sounding so different than anything else on the “Encanto” soundtrack. There’s some major Lin-Manuel Miranda wordplay going on (“rows and rows of roses” is the tip of the proverbial, flower-covered iceberg). This is another song that favors characterization over forward narrative momentum, which is okay in this case, especially for a character as elusive as Isabela. But it still seems somewhat slight compared to the other songs on the album. Of course, it’s hard not to get lost in the song during the course of the movie, especially thanks to the energetically staged musical number.

This is the only song we actually hear in the movie twice – in the lead-up to Antonio’s party and over the closing credits. And it speaks to its quality that we probably could have heard it a few more times and still been okay with it. “Colombia, Mi Encanto” is an upbeat pop ditty that encompasses the fun and energy of the movie in a lively, culturally specific way. (This is an exclusively Spanish-language jam.) This song feels so fresh and modern, too, if it’s not a hit on the radio in the next few weeks, we’d be surprised.

Is it time for a grandkid roundup? This song has to carry so much water, storytelling wise, introducing the audience to the world of “Encanto” – the magic, the abilities of the family members (including the sheer number of characters), the relationship between the family and the surrounding town. It’s a lot. But somehow, “The Family Madrigal” pulls it off effortlessly, delivering what is essentially exposition in the catchiest way possible. What’s more, it’s one of the more explicitly Lin Manuel-y songs on the soundtrack, including a small stanza that is said to be the fastest singing ever in a Disney song (you’ll know it when you hear it). As far as introductory songs, Miranda was said to have been inspired by “Belle,” the opening number from “Beauty and the Beast,” and both songs do an excellent job of table-setting. “The Family Madrigal” just does it with a much more energetic spring in its step. As a song, “The Family Madrigal” still succeeds without its dazzling visuals; the lyrics are that dense and descriptive. (Even if it takes you a few listens to get all the family members right.) “The Family Madrigal” asks: got all that? And we shout back: yes!

Jessica Darrow is one of the great discoveries of “Encanto,” and “Surface Pressure” is her chance to shine. Darrow plays Luisa, the member of the Madrigal family whose strength is utilized by the family and the community. Her song is about the pressure that goes along with that strength and it is an absolute banger. With a very contemporary hip-hop beat, exemplified by a skittering synth line, Luisa talks about everything weighing on her, with typical Miranda flair (“Was Hercules ever like, yo I don’t wanna fight Cerberus”) But unlike some of the songs, this isn’t just a biographical tune. Instead, it speaks to the mystery that Luisa saw (of the family breaking apart and the magic being extinguished) and what is at stake should the magic be upended. It adds real stakes and context. And it’s one of the very best musical numbers of the movie, full of whimsical, oversized imagery. Without the heightened visuals, “Surface Pressure” still totally rules. This is definitely one to play LOUD. Luisa demands it.

Here it is. The biggest hit off the “Encanto” soundtrack. And what a hit it is. Part of what makes “We Don’t Talk About Bruno” so great is how we get the perspective on shunned family member Bruno, who (as Mirabel sings) saw the future and then disappeared, from various family members and random townspeople. He ruined a wedding day! He is scary! He has rats living on him! Etc. Of course, “We Don’t Talk About Bruno” is nonstop fun, with some of Lin-Manuel Miranda’s sharpest, most vivid writing, alternately goofy, haunting, and moving. There’s also a fair amount of storytelling that takes place, and things that you’ll only catch after listening a few times (like Dolores faintly singing “I can hear him right now” because he’s still in the house). Also, the family really comes alive in a wonderful way in this sequence; you can see how their perspectives are formed, what their relationship is to one another, and how they really do seem like they would like him back. They don’t talk about Bruno, but they sure do sing about him. The song also benefits from not being so wed to the admittedly wonderful visuals from the musical number. “We Don’t Talk About Bruno” is genius on its own.

There’s been a lot of talk that Disney screwed up by nominating “Dos Oruguitas” for the Best Original Song Oscar instead of “We Don’t Talk About Bruno.” But here’s the thing: nobody knew that “We Don’t Talk About Bruno” would be a hit. And “Dos Oruguitas” is the better song. The first song written and conceived by Lin-Manuel completely in Spanish, the song soundtracks a flashback wherein Mirabel learns of the hardship her grandmother endured to found the casita and the surrounding area. It’s a moment of extreme tenderness, giving us additional information about Abuela and making huge strides in terms of the relationship between Mirabel and Abuela (which will ultimately heal the entire family). The fact that it is sung entirely in Spanish doesn’t matter (and if you’re really curious, there’s an English-language version on the soundtrack). If anything, it makes the song more powerful. (It was also a stroke of genius to have the song sung by a young man, Sebastian Yatra.) Miranda has said that he wanted it to sound like a 100-year-old folksong. Mission accomplished. (The sequence in the movie is stunning too, arguably the highlight of the entire movie.) Divorced from the visuals, the song will still make you sob, whether you know Spanish or not. That’s really something.