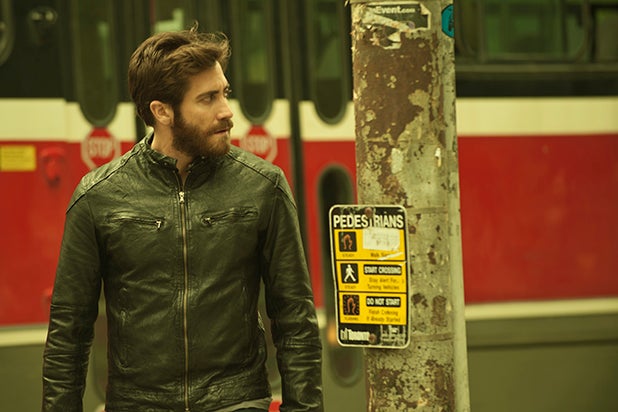 Although Denis Villenueve’s execution overshadows the material’s academic potential as a debate between nature and nurture, “Enemy” comes down firmly on the side of guidance over genes in its portrait of two identical, and yet completely different, men.

Villenueve, reuniting with his “Prisoners” star Jake Gyllenhaal for a character study equal in intensity and ambiguity to, say, the first 90 minutes of their previous collaboration, adapts Jose Saramago’s 2002 novel “The Double” into a riveting and provocative look at what defines us — and what doesn’t.

Gyllenhaal plays Adam, a history teacher whose mundane life is thrown into disarray after he sees an actor in a movie that looks exactly like him. Hunting down the young man, whose name is Anthony (also Gyllenhaal), he tries to arrange a meeting, in the process unsettling the actor’s wife Helen (Sarah Gadon). But in spite of his initial trepidations, Anthony eventually agrees, and the men soon discover that they share seemingly everything in common, at least physically.

Unnerved by the experience, Adam vows to never contact his counterpart again, and tries to return to his normal life. But the rendezvous continues to haunt the actor, prompting him to propose a sort of “exchange” — his wife’s discomfort in exchange for a night with Adam’s beautiful girlfriend Mary (Melanie Laurent) — which exposes the differences between the men, even as it reveals the impact of those differences on each other’s lives.

In spite of its deliberate pacing, moody tone and dreamlike imagery, what’s most interesting about “Enemy” is how its premise changes as the film progresses. The initial idea is at once promising, and terrifying: What if I’m not as unique as I thought? But that notion soon shifts into something more existential, as Adam and his doppelgänger begin to wrestle with precisely what it is that makes them unique, even when there’s somebody standing across from them who looks identical.

Adam is introspective where Anthony is impulsive, compassionate where his counterpart is self-absorbed, and so on. But unlike, say, the twins played by Jeremy Irons in “Dead Ringers,” these two men have no prior knowledge of one another, growing into themselves without a mirror image. Even their meeting means different things to each of them, undermining Adam’s sense of individuality while emboldening Anthony to use Adam’s insecurity to his advantage.

Gyllenhaal expertly distinguishes Adam from Anthony, creating two distinctive personalities that overlap just enough to unnerve the audience as much as it does the characters themselves. Looking at the actor’s turn as the investigating detective in “Prisoners,” Villenueve seems to bring out great things in Gyllenhaal, empowering him to make choices that avoid flash but remain effective for the character and story.

Laurent brings an alluring aloofness to Mary, a woman vaguely searching for a deeper commitment from Adam, but one inured to the absence of the kind of intimacy that leads to it. As Helen, on the other hand, Gadon plumbs stunning depths as the character views the two men’s mutual discovery as a symptom of much larger and more terrifying things going wrong, perhaps in the universe, even as it underlines the qualities that she wants, and finds absent, in her relationship with Anthony.

There’s also some recurring business about spiders, which the film deftly avoids explaining with any clarity while still milking for maximum dramatic effect. Perhaps the most chilling notion in Villenueve’s adaptation is the idea that we actually can and inevitably will be different from everyone else, while still finding ourselves conforming into the same humdrum routines.

Ultimately, Villenueve’s latest is a Möbius strip of a movie, a portrait of self-examination projected onto the canvas of a psychological thriller in the frame of a character study; as such, viewers will mostly likely get out of it dramatically and emotionally exactly they you put in. Whether or not that’s a good thing is, as with the characters themselves, a matter of personal definition.

While arachnophobes should probably stay far away from “Enemy,” it’s otherwise intriguing enough to allow yourself to be caught in its web.