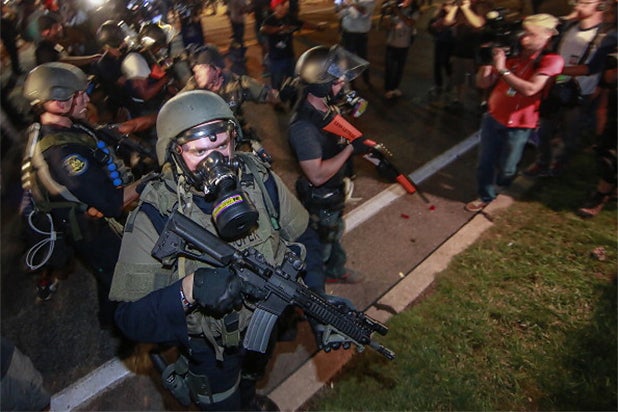 The lawsuit seeks $40 million. The five plaintiffs include a clinical social worker who said she and her 17-year-old son were roughed up and arrested after not evacuating a McDonald’s quickly enough, The Associated Press reported.

They also include a 23-year-old man who said police shot him with rubber bullets and called him racial slurs as he walked through the protest zone to his mother’s home. Another plaintiff said he was arrested for filming.

A St. Louis County police spokesman referred questions to County Counselor Patricia Redington, who told the AP she had not seen the suit and declined comment.

Some looting broke out soon after officer Darren Brown shot Brown, 18. But on subsequent nights, protestors gathered peacefully to demand justice for Brown.
Police using military-style vehicles and weapons were caught on video firing tear gas and non-lethal projectiles at demonstrators, and arrested dozens. Among those arrested were two reporters who didn’t leave the McDonald’s as quickly as officers wanted. They are not among the plaintiffs.
Also read: Police: Tear Gas Not Fired at Al Jazeera News Crew Intentionally (Video)

Aggressive policing has been well-documented by the dozens of reporters who covered the protests. Some also experienced it firsthand. CNN’s Jake Tapper and Don Lemon said they were pushed by officers. An Al Jazeera crew fled from tear gas fired just a few feet from their camera. Lemon said one National Guardsman used the N-word to describe the demonstrators, while speaking to one of his white producers.
President Obama noted last week that a small number of people among the protestors had attacked police, while stressing that officers had to respect demonstrators’ right to peaceably assemble. He ordered an investigation into the use of military-style resources by civilian police departments.
Pamela Chelin contributed to this report.