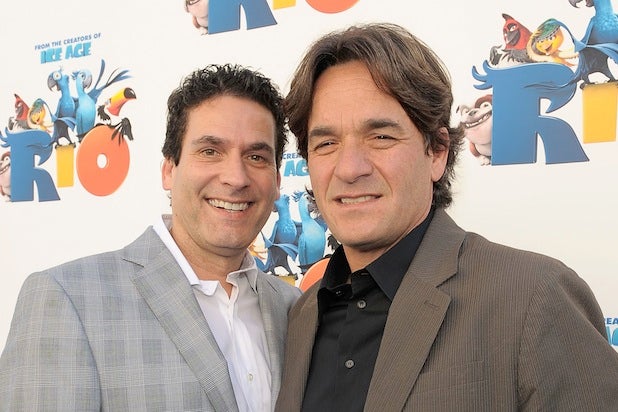 Aviv was booted from the role on Thursday in favor of a pair of international marketing veterans.

“From day one there was this disconnect between the two of them,” an executive close to the situation said Thursday. “He had three years to assert himself here and he didn’t make much of an impression.”

Another film executive added: “Tony plays by his own rules. He doesn’t attend meetings. He doesn’t do emails. He’s quirky.” Sella is also known for brilliantly creative marketing campaigns.

A former Disney production and marketing executive, Aviv came aboard in 2011 with the mandate of bringing strategy, order and structure to a department viewed as fly-by-the-seat-of-its-pants. The theory was that Aviv’s rigorous task-mastering could free the creative Sella to do what he does best — cook up cool trailers, posters and campaigns.

Also read: We Staffed a Whole Movie Studio With Ousted Executives – And It’s a Dream Team

But instead of providing an organizational framework for Sella to work his magic, an insider says Aviv was frequently deferential in meetings and didn’t impress the higher-ups. The two men’s styles didn’t mesh.

Other executives dispute that characterization, noting that Aviv has a reputation for being hard-charging and making his feelings known.

Either way, it appears that this week’s shake-up will end with marketing — for now.

Despite speculation that studio chief Jim Gianopulos might consider bringing in an executive like former Warner Bros. film chief Jeff Robinov or recently ousted Universal Chairman Adam Fogelson over production president Emma Watts, a studio insider said that Gianopulos is pleased with her performance — and believes she is growing into her role.

Gianopulos has in fact talked with Robinov, but balked at his ambitions to essentially serve as co-head of the studio.

As for Aviv’s replacements, there appear to be two reasons the job went to Paul Hanneman and Tomas Jegeus, international marketing vets who immediately take over as co-presidents of worldwide theatrical marketing and distribution.

Hanneman and Jegeus have extensive experience in the overseas marketplace and, particularly attractive for Fox, have held top posts in key Asian territories, where China and Japan are the second and third biggest markets.

“It’s an acknowledgement by Fox that foreign markets are more important than ever before,” David Weitzner, a faculty member at the USC School of Cinematic Arts and the former worldwide marketing president for 20th Century Fox and Universal Pictures, said. “Much as I hate to see friends and colleagues get shunted aside, I’m impressed with what Fox is doing. It shows someone is awake at the helm and steering the ship in a particular direction.”

Also read: From ‘Skyfall’ to ‘The Avengers,’ How the Foreign Box Office Is Trouncing Domestic

The other reason is comfort level: Both Hanneman and Jegeus have been with the studio since the 1990s and have Gianopulos’ ear.

“Jim feels more comfortable with international guys,” an executive said. “He hired them, he groomed them, and they’re smart and capable professionals.”

Under the new structure, both the domestic and international marketing and distribution teams will report to Jegeus and Hanneman, instead of operating as independent silos.

Marketing chiefs have been something of an endangered species this year and have frequently found themselves blamed when movies don’t work commercially. Aviv’s exit follows the ousters of Marc Weinstock at Sony, Terry Curtin at Relativity Media and Anne Globe at DreamWorks Animation.

Fox ‘s foreign business has been a source of strength. Its “Ice Age” franchise, for instance, became a $2.8 billion juggernaut primarily because of foreign audiences, while overseas markets added roughly $250 million to “The Wolverine”s’ gross after domestic crowds were lukewarm to the superhero sequel. Likewise, “Life of Pi” took 80 percent of its $610 million worldwide haul from abroad.

In a business where studio players are only as good as their last picture, Hanneman and Jegeus have been consistent performers and have helped Fox become a major player in the global marketplace — exactly what Gianopulos wants the studio to be.