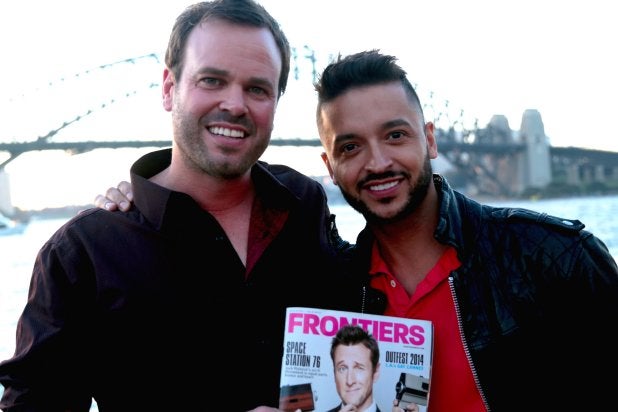 The publishers of the LGBT magazine “Frontiers” is teaming up with the Australian production company to make two more seasons of “The Horizon,” the most-watched gay online series in the world, and they’re bringing the action to Los Angeles.

It’s a shift in focus for the media group, which is testing the waters of online television for the first time, and also for the popular Australian-based series hoping to find an even bigger audience after partnering with a U.S. company. It has amassed over 23 million viewers so far, recently launching its fourth season in June.

The companies will work together to produce the 5th and 6th seasons of the show, which features newly cast Emmy-Winner Jai Rodriguez, from “Queer Eye for the Straight Guy,” alongside the existing cast including Patrick James, Indigo Felton and Paul Layton. As part of the deal, “Frontiers” magazine will play a part in the story.

Rodriguez’ character is described as “a promiscuous American pop singer visiting Australia.” He will then return to the United States and become the focus of the first installment of “The Horizon: L.A.” The series will be available on Frontiersmedia.com and YouTube.

“With its wholly original storyline, and huge American audience, ‘The Horizon’ was a natural fit for Frontiers Media’s first move into online television,” said Michael Turner, CEO and founder of Frontiers Media. “The creators of the show have consistently raised the bar for the genre from season to season.”

“With our international success I always liked the idea of formatting the series in different countries,” added series producer Brian Cobb. “We’ll develop American storylines and characters, and pepper these with our key Australian cast, as we explore the explosive gay scene around West Hollywood. Frontiers is the perfect partner to expand our American audience.”

Cobb was sure to point out that one of the key missions of the show will remain unchanged. “We are part funded by our state Aids council, ACON (Aids council of NSW), and we will stick to our original vision remaining a vehicle for safe sex and HIV awareness,” he said. “Our talented Creator Boaz Stark has found the perfect balance in writing engaging, edgy, true to life stories, whilst still being insightful and raising awareness on gay issues. That won’t change no matter where we make the series.”