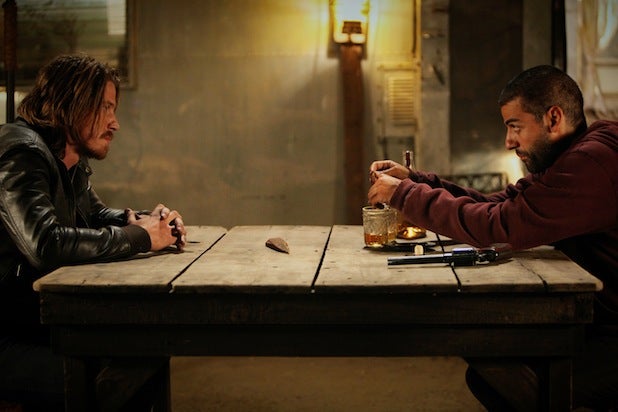 Garrett Hedlund plays a rich, spoiled Hollywood star. Oscar Isaac plays a drifter who might be the devil himself. And in William Monahan‘s seriously twisted “Mojave,” which had its world premiere on Saturday night at the Tribeca Film Festival, it’s sometimes hard to tell which of them is worse.

The directorial debut of the man who won an Oscar for writing Martin Scorsese‘s blood crime drama “The Departed,” “Mojave” takes noir to another level, mixing biblical and Shakespearean allusions, philosophical discussions and Hollywood satire with beatings, shootings, car wrecks and lots of thoroughly unpleasant behavior.

It’s sometimes messy and overwrought and always thoroughly implausible, but you don’t go to something like this to have it make sense – instead, you want it to be damned entertaining. And it certainly is that, particularly when Isaac is onscreen.

The idea for the film came to him, Monaghan said in a post-screening Q&A, when the writer took a trip to the desert. “I was sitting by the campfire and I thought, What if there was another shithead like me out here?”

That’s what happens at the beginning of the film: Seeking an escape from all the awful fame he’s achieved, Hedlund’s character Thomas runs away from his mistress, his wife and kids, his agent, his producer and everybody else to take a self-destructive and maybe even suicidal trip to the Mojave Desert in Southern California.

There, he encounters Isaac’s Jack, a grubby, rifle-toting wanderer who shows up in his camp and immediately launches into a priceless discussion about how Jesus Christ was tempted by the devil when he ventured into the desert, and how Captain Ahab’s missing leg in “Moby Dick” is a needless dramatic device “like something thought up by an executive’s wife.”

What follows, both in the desert and back in Hollywood, is thoroughly black and more than a little sick, mostly in a good way — and if the weird literary illusions are funnier, richer and more original than the shots at Hollywood, it figures that they would be.

(Mark Wahlberg is a hoot chewing the scenery as a coke-dealer-turned-producer, but Walton Goggins’ performance as an agent whose preferred mode is near-comatose is just as funny, and a little less cartoony.)

The film is really a duet between two men who Monahan described as “equivalent in many ways.” In a way, Hedlund and Isaac play two sides of the same coin, but Thomas is all torpor and evasion and muffled anger; Jack is sharper, more driven, more twisted and more interesting as a character. He’s one sick puppy, but you can’t take your eyes off him and you want him to keep talking – which, fortunately, he does, all the way to the bloody end.

“People go crazy in the desert,” said the writer-director in the Q&A, summing up both the impetus for the film and some of the experiences filming in the titular location. He was accompanied by Isaac, Hedlund and French actress Louise Bourgoin, who said she learned English to play the part of Hedlund’s mistress.

To be charitable, her part isn’t quite as rich as most of the male roles – and neither are any of the other women’s parts in the film – but Bourgoin described the four days she spent shooting as a pleasure nonetheless.

“Oscar and Garrett were so professional compared to French actors,” she said, “that I really want to live here.”

Isaac was also asked to compare this experience with another film he recently completed when an audience member asked him to address the main differences between making the new “Star Wars” movie and acting in a low-budget indie.

“Really bad food,” he said quickly. Then he paused and looked at Monahan.

“The bad food was on ‘Star Wars,'” he said with a grin. “Really healthy stuff.”