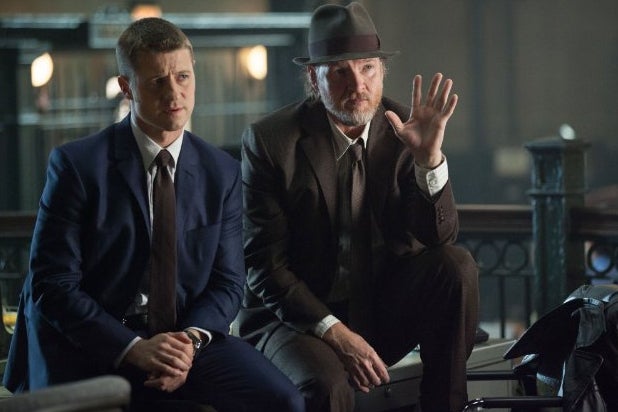 Fox’s Batman prequel has enjoyed an excellent start to its freshman season, a run so far of 10 episodes that will come to a (temporary) close with its fall finale on Monday night.

“Gotham’s” ratings success hasn’t been lost on the network, the industry, or the show’s production team. Ordinarily, executive producers avoid questions about the Nielsen numbers — good or bad — but John Stephens (also of “Gilmore Girls” fame) and company have a hit on their hands, and he’s willing to address that they know it.

“As soon as you know you’re doing well enough, that there’s an audience for it — then you’re like, ‘OK, that’s great,” Stephens told TheWrap. “Everybody feels it. It energizes everyone on the set — from the crew, the actors, everyone.

“It has a complete effect upon the morale of the people who work on the show,” he continued. “And because of that, the product gets better. It helps … a 22-episode season, it’s a march.”

“Gotham” wasn’t originally ordered with 22 episodes. And before the show debuted, creator Bruno Heller and executive producer Danny Cannon told TheWrap they would have preferred even fewer than the original 16 episode count. But the network’s vote of confidence is not all bad — aside from forcing the cast and crew to cancel their spring vacations.

“Rather than stretching out material, it actually allowed us to come out with new storylines and place them inside the order, that we probably would have pushed to Season 2,” Stephens explained.

Also read: 'Gotham's' Nicholas D'Agosto on Becoming Two Face: 'I Would Be Surprised If It Didn't' Happen

Plus, the endpoint of Season 1 has remained as originally planned, he added. Thanks to highly popular cable dramas, season finales across all of TV are more important than ever before, Stephens revealed.

“We’ve come to expect and we like those shows like ‘Game of Thrones’ or ‘Walking Dead’ where they’ll end the season and something will happen that will be like a paradigm shift,” he said. “And you’re going, ‘Oh my God, this show that I’m going to keep watching has not been the show I’ve been watching.’

“It’s taking the characters you have and turning them or adjusting them in some way that you’ve never seen them before,” he continued. “So that the audience never has that sense of, ‘Oh, I know what to expect.’ Because that’s the death now for a TV show.”

Actually, “Gotham” hasn’t changed much at all from Heller’s original conception through present day, though Stephens admitted that going forward, audibles from the writing room and production offices will become a little bit more prevalent on screen.

One noticeable adjustment is that the comic book drama is going to become more serialized than procedural, or in other words, more “crime saga” than “case of the week” as it has been.

Half of that decision stems from individual fictionalized Gotham P.D. cases organically coming together better than the producers envisioned, Stephens said. The other reason is simply that the serialized stuff played better to the audience.

On Monday’s fall finale, “Gotham” will introduce Larissa Diaz, a.k.a. Copperhead (Lesley-Ann Brandt), the latest in a long line of known quantities from the DC Universe making their way onto the Fox show early. “We definitely went for it Season 1,” Stephens admitted of the crop of characters they’ve introduced already. And Copperhead won’t be the last, he teased, as the final DC biggie in this 22-episode run will be inserted into Episode 14 (which, at the time of our interview, just began filming) or 15, then they’re going to take a break from that deluge until Season 2.

A new face aside, Stephens teased that Monday’s fall finale episode will hold an “elaboration” of the relationship between two main characters that were introduced in the pilot — the young Bruce Wayne and Selina Kyle.

“I think people who are fans of the comic books will see all of the shades of Batman and Catwoman that they’ll know from later in life,” Stephens said. “We’ll also peel back another onion layer of the Wayne Industries mystery that we have planted a couple of times in the season.”