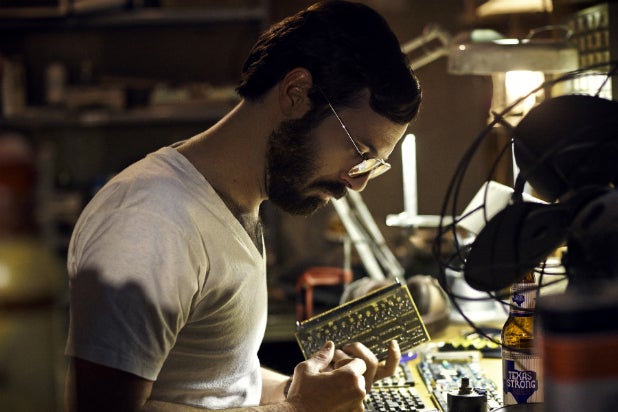 AMC goes back to the early ’80s with the premiere of its new drama “Halt and Catch Fire,” the tale of a hot-shot, morally flexible computer salesman (Joe MacMillan, played by Lee Pace) and a world-broken engineer (Scoot McNairy‘s Gordon Clark) who reverse-engineer an IBM computer — much to IBM’s consternation.

TheWrap spoke to showrunner Jonathan Lisco about the challenges of making computer code interesting, toxic arrogance and the legacy of the early computer era.

TheWrap: Is it difficult to draw drama out of the subject matter of computer programming?
Absolutely. That’s a balance that we’re very, very cognizant of in the writers room, and one that we knew would be a challenge. Anytime that you’re going to do a show about the computer business, I think people are going to make the assumption right off the bat that it’s potentially not going to dramatically blow your hair back. But I think that’s, funnily enough, one of the things that we have in our favor. Because I think people’s presupposition about that is going to be exploded when they watch the show and find out just how dramatic the series will become. From my point of view, we use the cloning of the PC as a scaffold off which to hang all sorts of interesting inquiries about the character. That’s my take on the show.

In the first episode, Lee Pace‘s Joe MacMillan character comes off as very much the heel, while Scoot McNairy‘s Gordon Clark is very meek and mild-mannered. Will there be more of a gray area for those characters as the show progresses?
I think there’s absolutely a gray area. Look, anybody who’s trying to wrap his or her mind around something bigger — capital S, capital B — they’re searching for something bigger, they’re searching for something that they believe, in their arrogance, might actually revolutionize the way we live, anybody who’s going to be doing that is going to have a pretty healthy ego, to put it mildly. And I think that’s part of the inquiry here: We’re going to explore the dark side of the human ego. We’re gonna explore the destructive power of ambition. We’re gonna explore the often thin line separating genius from delusion. And that’s not specifically just the purview of Joe MacMillan.

Don’t forget, we’re meeting Gordon three years after a pyrotechnic failure. So if he seems subdued, that’s because it’s in the wake of this personal tragedy. He thought he was gonna be flying close to the sun his whole life. He had the burden of believing, as [his wife] Donna says to him in the pilot, that he’s a misunderstood genius. Well, he just got slapped. So we’re meeting him under those circumstances, but I think it’s not difficult to imagine that he’s got a very healthy ego under that alleged veneer of insecurity.

I also think that genius is only determined in retrospect, because when they’re trying to be geniuses they’re often viewed as crackpots. He’s going to toggle back and forth between feelings of meekness and insecurity, and an overriding, almost toxic, arrogance.

One of the most telling things in the first episode is when Gordon tells his kids that the computer he built is the best thing he ever did — which is quite the thing to tell your kids.
Yeah, and also basically talking to Donna, saying, “Yeah, maybe one of the reasons I’m stuck in the mud is because of you holding me back.” And of course, what she’s thinking is, “Oh, you think you’re a kite, do you? Well, who do you think’s holding the string?”

The show is dealing with technology that, by today’s standards, is absolutely ancient. Do you worry at all about a technological disconnect for viewers whose iPhones do everything but wash their cars for them?
I did at first, when I was thinking of even taking this job. I asked myself, since we’re in the information age, we don’t know the end of the story entirely, but we know where we are now obviously, will people be interested in looking back at the genesis of that? I sort of went back and forth on it, but now, after doing 10 episodes of the show and being someone who didn’t originally fetishize technology, I actually believe that there’s a romantic quality to looking back and realizing how big and clunky these boxes were, and how ridiculous a C prompt was. But in the day, that were fantastic. There were whole clubs associated with that stuff, and people were on fire about it.

And I think there’s a kind of nostalgic romance associated with looking back at how humankind invents stuff that’s incredibly popular and seemingly mod today, and can tomorrow seem like something you want to sweep into the trash bin of history and never look back at.

But as a center for drama, it’s a pretty great one. It’s very vivid, it’s very graphic, and it’s very dynamic.

See photos and video: ‘Halt and Catch Fire': They’ll Either Revolutionize the Home PC or Self-Destruct

What other themes are you particularly interested in exploring on the series?
“Halt and Catch Fire” also likes to look at the following idea: There’s some lore — it could be apocryphal, it could be true — that Mark Zuckerberg basically created Facebook because he couldn’t get a date, or he couldn’t get behind the velvet rope at whatever place he wanted to go dancing. That’s probably an overstatement, but you know what I’m talking about. And thus, he put all his problems and all his neuroses about that into Facebook when he made it. And then we, in society, became the recipient of all that.

Similarly, the the protagonists of “Halt and Catch Fire” are kind of baking their own unique hopes, fears, dysfunctions, into the machine that they’re building. And I think it’s an interesting inquiry to ask, “Well, at the same time that society benefits, aren’t we all therefore kind of absorbing their psychopathology they’ve been putting into their stuff?” We love that theme.

How much will the show be drawing from real-life cultural events in the ’80s?
We’re always looking at that. Obviously, during this time period, the first woman went into space, Sally Ride, and there were all sorts of interesting things happening. Now, the key as writers is always to integrate them subtly into the narrative, as opposed to making them the linchpin of the narrative. Because when you do that, you start straying from the emotional honesty of the story you’re telling. Even back in that time, not everyone was constantly talking about the cultural developments of the era. We were still going out and eating, going to work and fiddling with stuff. And so if you make a whole episode of TV that’s somehow focused around a historical event, you have to be wary of keeping it real.

So yes, we’re always cognizant of what’s happening, we’re looking at the timeline of events in America and the world all the time, but we’re going to use that stuff sparingly and kind of as grace notes when we think it accentuates the main story that we’re telling.

In the first episode, the big battle is between IBM and the upstarts, but will the rise of Apple come into any of this at all?
I think it’s inevitable that our characters will have to deal with it at some level. I’d love you to watch the first season and respond to how we dealt with that. I think you’ll find it really interesting and we hope pretty stirring.