Growing up in southern Black megachurch culture in Atlanta, GA, identical twins and filmmakers Adamma and Adanne Ebo saw both the beauty and the messiness within the complex community — enough to inspire a satirical comedy years later, they tell TheWrap in a spoilery interview about the resulting film and its themes.

Their new Focus Features comedy “Honk for Jesus. Save Your Soul” (which is now playing in theaters and streaming on Peacock) paints a glorious picture of the luxurious life led by Pastor Lee-Curtis Childs, played by Sterling K. Brown, and his wife, Trinitie, played by Regina Hall: a loving marriage, political influence, designer wardrobes and a loyal congregation. When a scandal threatens to take their church — and them — down, the pair is determined to salvage their success with an Easter Sunday re-opening and welcomes a documentary to capture their comeback journey.

What began as a short film quickly developed into a feature-length project, with the support of Hollywood royalty, including Daniel Kaluuya, who produces the film through his production company 59% and Issa Rae, who included it on her Short Film Sundays YouTube Channel.

Though details are never formally addressed, the controversy surrounds allegations against Lee-Curtis brought forward by young men, who are all former congregants. Consequently, the couple is simultaneously in the process of settling with the plaintiffs as they plan their grand reopening.

For writer and director Adamma as well as Adanne, the film’s producer, satire is their “sweet spot” and the duo has found it can be a good starting point to discuss hard topics. 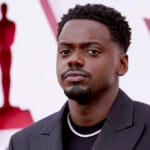 “I wanted it to be a specific type of satire,” Adamma told TheWrap. “I didn’t want to lean into being farcical or parody, because I wanted this to feel very, very real and … a lot of satire doesn’t … take creative liberties with the culture.”

“I think it’s not so much a critique of religion, but more about hypocrisy and how people in positions of influence can leverage a perceived proximity to a higher power as a tool to manipulate others,” said Win Rosenfeld, a representative for Monkeypaw Productions, who executive produced the film. “‘Honk For Jesus’ isn’t a horror movie, but that dynamic is terrifying.”

Although Lee-Curtis — and the allegations against him — are front and center in terms of his church sermons and political relationships, the film significantly centers on Trinitie, hinging upon whether she will continue to stand by her husband through the worst.

“I always found the idea of the woman behind the man very interesting, because when you really dig into it, it’s not that at all,” Adamma said. “There’s way more support … or way more action and agency, [than] just being behind the man.”

“I was really interested in seeing what a situation like this would mean for someone who has so much to lose, because she has done so much,” she continued. “It’s not just his world. It’s not just his church or his congregation, like it is equally hers,” she concluded, noting that Trinitie did not do anything wrong, yet must face the consequences of her husband’s alleged actions.

While she appears to steadfastly defend Lee-Curtis while in the public eye, Adanne notes that Trinitie realizes “she cannot be stagnant or complacent in in the same way that she has been, or else it’s literally going to crush her.”

The couple’s elite positioning is thrown into even more jeopardy when another young couple and faith duo, the Sumpters, plans to unveil their new church on Easter Sunday as well. Although the Childs see themselves in the Sumpters, the Childs become even more scared when they realize the younger couple is catering to another niche.

As Lee-Curtis and Trinitie rally old congregants on their journey back to the top, a documentary crew trails close by, never daring to break their silence, prompting the audience to reexamine what the truth actually is.

“People take documentaries as as telling the truth or telling fact,” Adanne told TheWrap. “And so, exploring these people be their most false self when the documentary cameras are on and are trying to show the truth, or at least … trying to craft their perspective on the truth … And then when the cameras are off, we get their true selves.”

In a last-ditch effort to promote their Easter service, the Childs preach, dance and mime on the side of the road alongside a life-size Black Jesus statue. While the towering figure, whose image also opens and closes the film, certainly sparked spectacle — for better or for worse — it notably stands in contrast to typical physical depictions of Jesus. 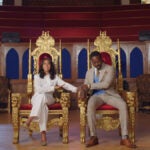 “As someone who has their critiques of organized religion and the church, but still finds themself a spiritual person, it meant something to me to see Jesus Christ in my image, looking like me,” Adamma said. “So, in the film, I wanted Jesus to look like the people who purport to be doing his work. I think it’s gets deeper when you’re like, ‘we are made in His image and that’s a fact.'”

Upon the request of Lee-Curtis, Trinitie also performs praise-miming, a worship practice within Black faith communities. For Adamma, who was surprised to learn many were not aware of the tradition, she wanted this moment to be something that people who know the culture would immediately know and identify with, while also functioning as “a surreal moment of true desperation.”

“It sounds like I treat her so bad but I wanted to pile on to Trinity,” Adamma said. “Because she’s wearing so many masks throughout the film that I was like at a certain point, we have to see her in a literal type of mask. And that last mask, the mime makeup, is too heavy for her; it’s the straw that breaks the camel’s back.”

After hitting her final breaking point, Trinitie releases her true feelings for the first time in front of the documentary crew. Despite never before breaking her silence, Anita, who leads the documentary, steps up to ask Trinitie why she chooses to stay with Lee-Curtis.

“It also signifies camaraderie, I think, especially amongst women, because Anita is at her breaking point,” Adamma said. “She’s like, ‘Why is this still happening?’ I think it really shows that, in some form or fashion, women will have each other backs — and need to.”

Although less pronounced, Trinitie’s journey runs parallel to that of Lee-Curtis, who does not have his revelation until the very end of the film, and both conclude that things must change.

“They’re staying together, they’re still going to do this church thing, but I think they both realized that the way that their relationship operates cannot be what it was,” Adamma said. “It’s different, it has to operate differently.”

The film’s score by composer Marcus Norris also contributes to a darker tone, as the sisters did not want it to be gospel heavy, or to be indicative of stock religion at all.

“Because the tone gets is dark, or gets darker, I wanted the tone of the score to reflect that as well,” Adamma said. “So there are moments that feel super intense and like thrillers but there are also moments that are quite beautiful.”

This genre-bending film is what attracted Monkeypaw to the project at Sundance as they sought out genre films, noting that “Honk for Jesus” hit them “like a ton of bricks.”

“In ‘Honk,’ the Ebo sisters do an incredible job of lulling you into thinking this is one kind of movie by disarming you with hilarious vivid characters and set pieces,” Rosenfeld said. “Once you’re comfortable and drunk on that vibe: they hit you with something much darker.  But it’s never obvious or preachy or didactic: It manages to shift an audience’s feelings without compromising a very specific tone.”

“Honk for Jesus. Save Your Soul” is now playing in theaters and streaming on Peacock. 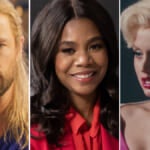