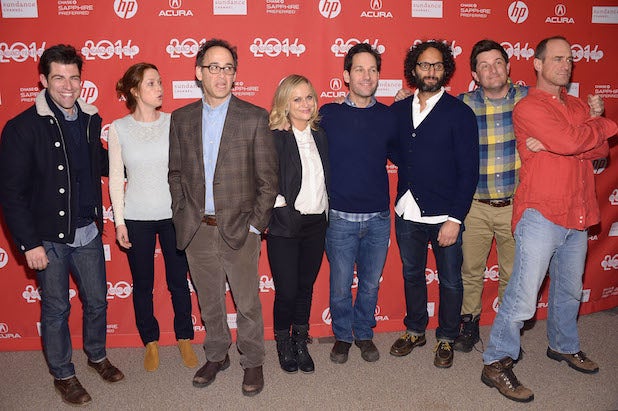 When David Wain and Michael Showalter first wrote the original script for “They Came Together,” it was a specific sort of parody, an assemblage of scenes that riffed on particular movies within the romantic-comedy genre. Eventually, after years on the shelf and a major rewrite, it became more of a cohesive story that played on the genre’s tropes and worst tendencies, with allusions to the Tom Hanks-Meg Ryan rom-coms of yore.

Also read: A Week With David Wain as He Comes Together With Amy Poehler, Paul Rudd and Friends

Ironically, as Wain and Showalter toured Sundance with their cast — Amy Poehler, Paul Rudd, Jason Mantzoukas, Cobie Smulders, Ellie Kemper and Max Greenfield, among others — their parody movie was subjected to the sort of questions that get asked at every press junket, which shows just how rehearsed every aspect of the film industry has become.

In order to fully celebrate the cliches of show business, TheWrap sat down with the cast of the film and conducted the most perfect junket-style interview of all time.

There is great chemistry among the co-stars — how did you guys establish that?
Rudd: We spent a lot of time together.

Showalter: You guys followed a couple along, didn’t you?

Poehler: We did a ride-along.

Rudd: We studied a lot of couples. We went to a couple of couples’ therapy sessions.

Showalter: We were so impressed by how dedicated you guys were.

Poehler: And I think chemistry is about not acting, but reacting, and not talking, but listening.

Mantzoukas: And didn’t you guys go to scientists to get chemistry tests done?

Showalter: Wow, you just shut that down really fast.

Wain: Are you kidding?

Mantzoukas: You shut. That. Down.

Poehler: That is terrible.

Were there any on-set pranks?

Wain: Can I tell this one?

What’d you do for the last 10 minutes?!
Rudd: I get there, I did everything that I normally do, I went through the works as they call it, do all the stuff.

Wain: But he had to do it a little faster!

Showalter: I didn’t even know what was going on!

Mantzoukas: You can’t tell Showalter about pranks because he’ll reveal them.

Wain: And Jason was like, Dave, please let these guys off the hook. So I let the air out of the balloon at that point, like, “Paul, you have been had!”

Showalter: The look on your face, I gotta tell you.

Poehler: You were a little mad!

Rudd: At first I was a little mad, but it was so classic, it was so funny that I had to be cool.

Showalter: We got you good.

So, did this have to be in New York, this movie?

Showalter: I was even thinking, I sort of feel like especially, you know this if you live in New York, it’s really intricately woven into the DNA.

Poehler: I think that at the top of the credits, the star of this film, it should just say New York.

Showalter: And that’s one star you can never negotiate with.

Mantzoukas: Can I ask David and Michael a question? Did you guys write this movie with New York in mind?

Mantzoukas: Did you always know it was New York, or did you write it for another city, and then New York became available?

Wain: We wrote it for Anytown, USA–

Wain: And then in post we just decided, let’s call it New York.

Rudd: What’s really interesting is, and this is what often happens, you can imagine anybody in parts and then you go film the movie, in a way I can’t even imagine this movie being set anywhere other than New York.

Showalter: You say “In a way,” I would say the same exact sentence but I would take “In a way” out of it: I can’t imagine this movie without New York. I just wouldn’t qualify it like that. And by the way, I’m not trying to be a dick.

Rudd: That’s the great thing, people say what’s on their mind. And the energy!

Wain: They’re kissing and really in love, where else could that happen?

Poehler: And a bagel is a bagel, you know? You get what you get.

Rudd: And by the way, you can walk down the street and within one city block hear 12 languages.

Poehler: It so is!

Showalter: It’s a melting pot of culture and ideas.

Rudd: It’s the greatest city in the world, it is the city of the world.

Wain: I can have New York-style pizza somewhere else, but fugghedaboudit it!

Showalter: You know what it is? It’s the water!

Showater: How do you do New York-style pizza? You have to have the water shipped to your city.