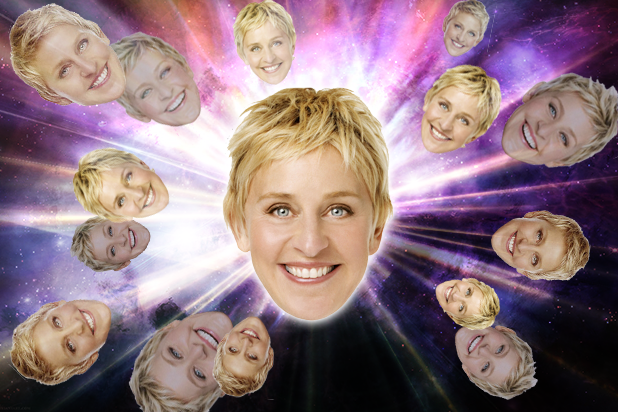 When Ellen DeGeneres came out as gay in 1997, J.C. Penney dropped her faster than its prices during a blowout sale. Along with Chrysler and Wendy’s, the retailer succumbed to pressure from the American Family Association and Christian conservative groups, pulling ad dollars from her sitcom “Ellen.”

Fast-forward 18 years, and DeGeneres has not only been hired as J.C. Penney’s spokeswoman (as well as American Express and CoverGirl), she’s managed to dance her way to the top of the TV industry, becoming one of Hollywood’s most powerful and likeable players.

“From the outside, it probably appears like a spontaneous burst of creative and productive energy,” Jeff Kleeman, head of DeGeneres’ production company, A Very Good Production, told TheWrap, “but the truth is Ellen has been working very, very hard, and very, very consistently for a number of years to get us to this point.”

With a top-rated syndicated talk show, a massive social media audience, series of bestselling books, three new shows (with five more on the way), two stints as Oscar host and the most-shared selfie in history, it seems everything DeGeneres touches turns to 24-karat TV gold.

See video: Madonna and Ellen Sing 80's Classic 'Dress You Up' in the Bathroom

“There’s something about Ellen and her voice that has people genuinely believing she’s telling the truth,” programming executive vice president at Telepictures, the company that oversees her talk show, David McGuire, told TheWrap. “She has an authenticity about her that comes through.”

These days, Ellen’s Midas touch can be felt across cable and broadcast networks alike.

Her first season of “Ellen’s Design Challenge,” a reality furniture design competition, ranked as one of the highest-rated series in HGTV history. “Repeat After Me,” a hidden-camera comedy currently airing on ABC, is drawing respectable numbers, its latest episode scoring a 2.5 rating in the advertiser-coveted 18-49 demographic. And last week, DeGeneres introduced her latest bundle of joy, NBC’s “One Big Happy,” a comedy about a lesbian woman having a baby with her straight best friend.

At least two more shows — which will be announced next month — are coming down the pipeline. Another half hour single-camera comedy starring Idina Menzel  is also in the works. “Hello Goodbye,” a docuseries featuring stories of travelers’ arrivals and departures at airports around the world, premieres June 2 on The Travel Channel. A fifth show, inspired by her best-selling app “Heads Up!” is currently in development.

DeGeneres has also found time to write a new home design book which comes out in the fall. And next time you head into a casino for a little slot machine action, you could be staring at DeGeneres’ face as you hit the jackpot. Each machine is equipped with custom voiceovers by DeGeneres and features games inspired by her talk show.

See video: 'Empire' Star Jussie Smollett Describes Coming Out on 'Ellen': 'A Bigger Moment for Other People Than It Was for Me'

Not every effort has been a triumph — lukewarm premiere ratings of “One Big Happy,” for instance, as well as a record label that hasn’t quite taken off and her short lived “American Idol” judging stint.

But the talk show phenom seems impervious to failure for now. The active diversification of her expanding empire seems to have ensured her brand’s continuing dominance.

Last summer, she upped the ante with her own lifestyle collection, “E.D.” She then launched “E.D. On Air,” a seasonal home collection created especially for QVC, in October. Last year, DeGeneres became the first daily U.S. talk show to be carried in China.

“Ellen and her team understand branding intuitively,” branding expert and the founder of The Brand Identity Center, Chad Kawalec, told TheWrap. “They are quickly evolving into a highly relevant lifestyle brand much like Martha Stewart or even Barbie. It’s no longer only about passive TV content, but rather full-on engagement.”

Combined, DeGeneres has accrued hefty profits. Forbes named her the No. 5 most powerful celebrity in the world, with an annual salary of $70 million — one position behind Oprah. Her net worth is estimated at an eye-popping $285 million.

Asked what Ellen’s secret to success is, executive producers of her monster daytime talk show say it’s her attention to detail and an uncanny ability to read her audience.

“Ellen has been an entertainer since she was a teenager,” executive producer Mary Connelly told TheWrap. “She knows how long an audience should wait before the talent comes out, what temperature the studio should be and how to bring along an audience so that they have a great time.”

It’s that skill that’s also made her a virtual phenomenon.

While her staff is kidding, of course, it could be argued that if anyone could “own” the Internet, it would be DeGeneres.

In the last few years, DeGeneres has become a nuanced virtual maestro, orchestrating social media engagement with the ease and agility of a seasoned symphony conductor, using humor as her baton.

See video: Michelle Obama Tells Ellen What She Misses Most About Life Before the White House

She was one of the first to join Twitter’s million followers club back when the social media network was still in its infancy. Today, DeGeneres’ account boasts a whopping 41 million fans.

Along with her 11 million YouTube subscribers, 17 million Facebook fans and 10 million Instagram devotees, Ellen rules over one of the most prolific social media empires in the world.

EllenTV.com, the official website of her daytime talk show, generates more than 120 million page views monthly, giving some major news sites a run for their money.

Since its launch in October, ellentube.com, a site featuring videos from her talk show, with net-favored categories such as “cats,” “kids” and “funny,” has garnered an incredible 100 million video views.

But it’s the kind of fans and their level of engagement that sets her apart from other TV personalities.

If only Bradley's arm was longer. Best photo ever. #oscars pic.twitter.com/C9U5NOtGap

A selfie taken by DeGeneres during last year’s Academy Awards broke the Internet. The photo, which included high-wattage stars such as Bradly Cooperwent mega-viral. By the end of the telecast it had been shared 1.8 million times, becoming the most retweeted image ever, smashing the previous record, 778,801, held by President Barack Obama following his 2012 reelection victory.

When a young Target store clerk by the name of Alex Lee started blowing up the Internet after a customer posted a picture of him on social media, everyone raced to book him. But in the end, it was DeGeneres who landed the first interview.

She also settled #TheDress debate once and for all. When the world recently became obsessed with a certain frock, unsure about whether it was white and gold or blue and black, Ellen scored the first coveted interview with the owner of the dress.

It was a strong reminder to everyone in the industry that when it comes to booking the hottest guests on the planet, DeGeneres has the right of first refusal.

“Those bookings are very important to us,” said Ed Glavin, another executive producer on “The Ellen DeGeneres Show.” “We have people who all day long are on YouTube, are on ellentube, are on the Internet all day every day looking for those stories. And when they break, we pounce.”

Since former talk show monolith “The Oprah Show” went off the air in 2011, things have been looking up for DeGeneres, whose daytime show began airing in 2003. Of the most recent crop of daytime hosts, no one has been able to fill the vacuum left in the wake of Oprah’s departure.

Katie Couric’s “Katie” got the ax after a short two seasons. Same for Queen Latifah. Meredith Vieira was recently renewed for a second season, but lackluster ratings have already raised speculation the show maybe headed for the chopping block.

While Vieira, Couric and, to a certain extent, Latifah had all the qualifications on paper, they lacked one essential component: DeGeneres’ unique style and her perfect comedic timing that have made her a mainstay on the daytime talk show circuit.

Also Read: Hollywood Hunts 'Alex From Target': The Perks and Pitfalls of Insta-Fame

It’s that observational brand of humor that landed DeGeneres on “The Tonight Show Starring Johnny Carson” in 1986. A fresh-faced 27-year-old DeGeneres stole the show with a funny bit featuring a phone conversation with God. At one point DeGeneres, tells the Almighty, “God bless you … bless yourself.”

Carson was so enchanted, he invited her over to his legendary couch her for an onscreen chat after her performance, the first time he’d ever done that with a female stand-up comedian.

DeGeneres’ unique comedic offering became the basis of her 1994 sitcom “Ellen,” which made her a household name. When DeGeneres came out publically during the show’s fourth season in 1997, the episode clocked an astounding 42 million viewers, winning television’s prestigious Peabody Award.

The show was renewed for a fifth season, but was eventually pulled in May 1998 due to poor ratings. DeGeneres, who learned about the cancellation by reading about it in a trade publication, blamed ABC and its parent Walt Disney Company for not supporting her show after she publicly identified herself as gay.

While her coming out episode made history, it also nearly destroyed DeGeneres’ career; for years, her phone stopped ringing with job offers and she even moved to Ojai, California thinking she was done.

“I think those were very humbling years for her,” McGuire said. “[But] because she held herself with dignity and grace, the audience was sort of cheering for her and things started to turn around.”

When DeGeneres lent her voice to a befuddled blue Tang fish in Pixar’s “Finding Nemo” in 2003, her star began to rise again — precipitously.

That same year, DeGeneres hit it big with “The Ellen DeGeneres Show.” She brought with her a different tone to the prevailing daytime talk show fare of the time, known for its Povich-style slap-downs and Geraldo-esque boundary-pushing behavior.

“She began to realize the kindness that comes from her actually connects her with people,” McGuire said. “When we landed in Australia, they shut down half of the airport and had a blimp following us around for three days.”

Ellen declined TheWrap’s request for an interview, instead offering her team to speak on her behalf.

“I will tell you that Ellen just stuck her head in and wanted me to tell you a couple of things,” Connelly said.”She danced her way into the office, she wants you to know she’s prettier in person, that she smells great and that her eyes are just as blue in person as they are on television.”