Jay Z’s Tidal wave is about to come crashing down.

The nascent paid music streaming service, which the hip-hop mogul bought and re-launched last month to the tune of $56 million, has been maligned in business media for marketing missteps and a product that didn’t seem to fill a particular need on the consumer landscape.

“Despite having Jay Z and Madonna and all of those folks on a podium, this is a really rough business, the paid subscription business,” Russ Crupnick, managing partner of streaming industry research firm MusicWatch, told TheWrap.

Crupnick said that the product is pretty good, but there’s nothing special about it. Where Spotify has a free option and allows users to create on-demand playlists with a social element, and Pandora generates free custom radio stations, Tidal is just an app that streams music – for a hefty price.

Tidal offers two subscription tiers: a basic membership for $9.99 per month, and a $19.99 membership that offers higher sound quality. But the big lure of Tidal, Jay Z hopes, is its exclusive content. Artists like Taylor Swift pulled their music off rival “freemium” streaming services like Spotify and put it behind Tidal’s paywall, arguing that Tidal will pay them fairly.

But as it turns out, people don’t seem to care much about exclusive content – or they find ways to listen without paying. A new song and video Beyonce recorded to commemorate her seventh anniversary with husband Jay Z — “Die With You” — wound up on YouTube the day after it premiered to Tidal subscribers.

Speculation has mounted that the power couple will release a joint album on the streaming service, but even that may not be enough to really give Tidal a boost.

Also Read: Spotify CEO to Taylor Swift: The Pirates Are Going to Get You

“Are there a million people who would sign up to get that exclusive?” Crupnick asked. “Forgetting piracy. If that special album came out in Walmart, or iTunes, how many people would buy it?”

“I don’t think the numbers are big enough to change the – excuse the pun – tides on this,” he added, explaining that streaming services need to count subscribers in the millions in order to be successful. “If I were them I’d stop making exclusives and start thinking about what benefits they’re going to offer their potential subscribers.”

Tidal did not make any executives available to comment for this story.

If listeners don’t care about exclusives, they certainly have no concern for – or even understand – the intricacies of how streaming services pay artists. The main conceit of Tidal’s big, and many say, misguided, launch event in March was the complaint that artists are not paid fairly by music apps like Spotify.

Madonna, Kanye West, Usher, Nicki Minaj and other multi-millionaire artists paraded onstage at the March 30 launch event to condemn the other services and promote Tidal as the app that pays.

But “99.9 percent of consumers either don’t understand that issue or couldn’t care less,” Crupnick said. The industry battle over royalties is not something that would inspire consumers to write a check for Tidal, he added, “especially when you have a bunch of wealthy artists sitting on a podium.”

“Could you imagine that people were subscribing to Netflix because Tom Cruise got a better shake?” he said. “It’s illogical from a consumer benefit standpoint.”

Even as initial backers are starting to keep their distance from Tidal, interim CEO Peter Tonstad stands behind the paid music streaming service’s viability and trumpets Tidal’s future potential.

“The whole industry is shifting toward the strategy we have always believed in: that streaming services should be premium subscription models rather than giving away stuff,” Tonstad told the Wall Street Journal on Tuesday.

Also Read: Kanye West Deletes All Mention of Tidal From His Twitter Feed

The recently appointed executive, who took over for Andy Chen when the company cleaned house in the middle of April, also has a decidedly rosier view of that widely-panned launch event.

“I was there; I thought it was absolutely fantastic,” he said. “I thought it was extremely large of these global, well-known artists to step forward and say, ‘We need to change the model.'”

Compare that to other “global, well-known artists” who think the optics of their peers onstage were part of the problem.

“I think they totally blew it by bringing out a bunch of millionaires and billionaires and propping them up onstage and then having them all complain about not being paid,” Death Cab for Cutie frontman Ben Gibbard told The Daily Beast.

“They squandered a really great opportunity of having all of these artists and their PR value and their fan bases explain to consumers why this was something that they should invest in,” the analyst said, adding that he would fire Tidal’s publicity team.

But Jay-Z himself is defending the service in impassioned rants on Twitter, and he conscripted Jack White to make personal phone calls to some of the service’s 770,000 subscribers to thank them for signing up.

And the service is not subtle about imploring customers who try to quit to rethink their decision. Departing subscribers are sent a “5 reasons why you should stay with TIDAL” email, which consist mainly of vague promises of features to come. 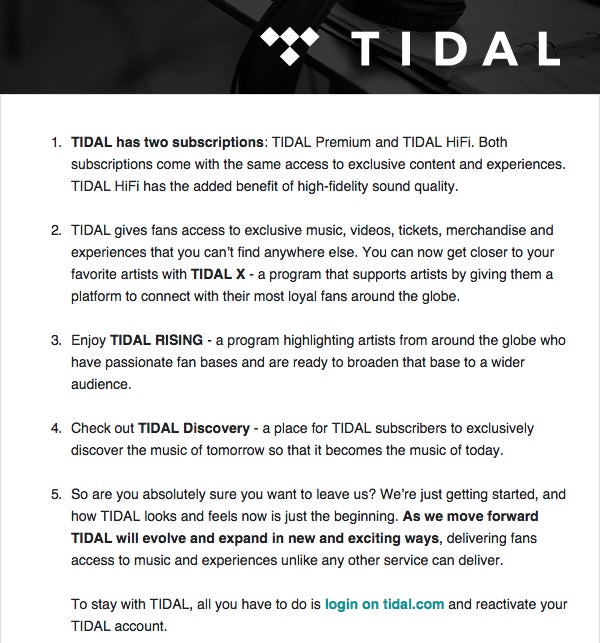 All of this paints a picture of a young company with a decent but unnecessary product and terrible PR team, Crupnick says. Media reports have been writing Tidal’s obit since before the service launched on March 30, but Crupnick believes it will be the consumer – influenced by, hopefully, improved marketing – who ultimately decide Tidal’s fate.

“Optics can always be changed,” Crupnick said. “What can’t be changed is the basic consumer attitudes or outlook towards these services.”