“I don’t deserve this but I will take it,” Black said. “Thank you, MTV. This is for all the ‘School of Rock-ers’ out there, and for all the ‘Tenacious D-sciples’ and, most of all, my amazing wife Tanya [Haden] and our two incredible boys, I love you.”

The “Nacho Libre” star began his short and sweet speech joking about all of the films he’s been in: “Are you kidding? For what? ‘School of Rock,’ ‘Jumanji,’ ‘Kung Fu Panda,’ ‘Goosebumps,’ ‘Nacho Libre,’ ‘Tenacious D in the Pick of Destiny,’ my sweet dance moves on TikTok? What are we talking about? It’s ridiculous!” he said, which prompted huge cheers from the audience. 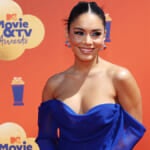 Black is the fifth recipient of the honor, joining previous honorees Melissa McCarthy, Kevin Hart, Will Ferrell and Sacha Baron Cohen. A consummate actor, he will reprise his cherished role as Po in Netflix’s spinoff series “Kung Fu Panda: The Dragon Knight,” currently in postproduction.

A frequent collaborator of filmmaker Richard Linklater’s, Black also starred in 2011’s “Bernie,” which garnered him his second Golden Globe nod. Most recently, he was in Netflix’s “Apollo 10 ½,” also helmed and written by Linklater. In 2018, he received a Hollywood Walk of Fame star. 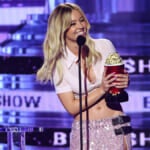