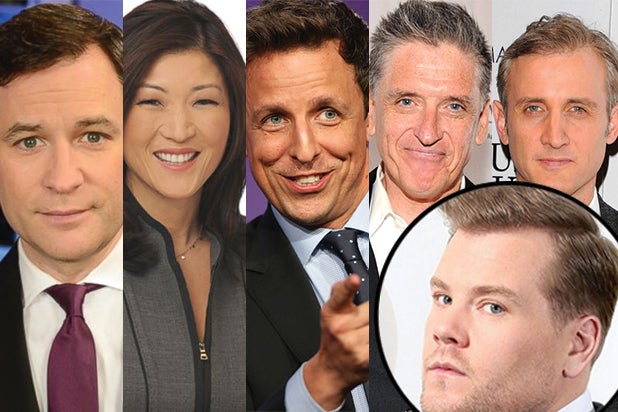 James Corden will have to overcome relatively low name recognition when he takes over the “Late Late Show” from Craig Ferguson next year — but at least he won’t face high ratings expectations.

Devout as Ferguson’s fans may be, his CBS show, which follows Letterman’s “Late Show,” is sitting in third place out of three.

The top dog at 12:35 is NBC’s “Late Night,” which was passed from Jimmy Fallon to Seth Meyers this season. It averages a 0.65 rating in the advertiser-coveted 18-49 demographic, and has averaged 1.93 million viewers in its first season.

ABC’s “Nightline,” which flipped timeslots with “Jimmy Kimmel Live” in January 2013, has a 0.42 rating and averages 1.68 million viewers this season. “Nightline” is just a half-hour show, which gives it a distinct advantage over the hour-long talkers that must retain their audiences as the midnight oil burns.

NBC’s “Late Night” has gotten a boost from viewers curious about Fallon’s final episodes and Meyers’ first ones. Since Meyers took over on Feb. 17, “Late Night” has averaged a 0.59/4 in the key demo and 1.65 million total viewers.

Historically, Ferguson has never beaten “Late Night” in the demo, though the Scottish-born comedian’s show topped Fallon in total viewers during the tumultuous 2009-2010 season, when Conan O’Brien briefly ascended to “The Tonight Show.”

The competition between CBS’ “Late, Late Show” and ABC has been stiffer, but all comparisons are tricky due to ABC’s floating timeslots over the last few seasons.

On Tuesday, TheWrap broke the news that Corden would replace Ferguson in 2015. (CBS declined to comment.) Stephen Colbert is replacing David Letterman at 11:35 next year.

CBS is hoping that Colbert performs a turnaround of his own, as “The Tonight Show” and “Jimmy Kimmel Live” have been steadily beating “The Late Show.” Fallon’s “Tonight Show” has been regularly besting Kimmel and Letterman combined.