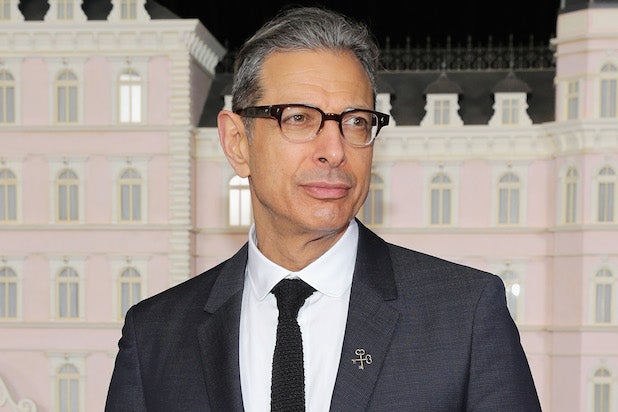 Jeff Goldblum isn’t on Facebook, but he knows what you crazy internet kids were up to last month.

In another round of the endless internet war between pretension and ironic nihilism, Facebook users in mid-February launched Occupy Jeff Goldblum, which entailed filling their feeds with photos and videos of the cult favorite 60-year-old actor. It was, as usual, a reaction to another movement, which had sought to drown out inane status updates with pictures of art. It was all in good fun, of course, and only got back to Goldblum — who co-stars in this weekend’s “Grand Budapest Hotel” — because one enterprising fan sought him out at his weekly jazz performance in Los Feliz, Calif.

“Somebody told me. I’m not on Facebook, I haven’t seen it, but I play this jazz gig at Rockwell and somebody came up to me and said, ‘Hey let’s take a picture! I’m gonna post it and have my own Occupy Jeff Goldblum picture!'” Goldblum told The Wrap last week. “I know people were kind of into it, what was it?”

Once it was explained, Goldblum, debonaire with streaked grey hair, smiled.

“I’m sure it’ll come and go, just like everything else.”

Goldblum is similarly easygoing about most other things in life, though he is hardly passive. Take his philosophy on his recent achievement of cult favorite status, which stems in part from appearances on “Tim & Eric” and “Portlandia,” and also the fact that a generation of kids who grew up loving “Jurassic Park” are now in charge of the internet.

“I don’t know, I keep my head down and focused,” he said, laughing again. “Like my third grade teacher said, when taking a test, keep your eyes on your own paper. I just try to wake up every day and keep making stuff.”

That’s a big part of his personal mission, constantly satisfying “a serious appetite for getting better and doing a variety of things and interesting things,” as he put it. And while Goldblum also laughs off a 2010 article in The Guardian that called him the “Buddha of Hollywood,” his philosophical outlook on life is similarly serene and curious.

“I’m a humble student of wise people,” Goldblum said, more than once. Off the top of his head, he named recent collaborators like Wes Anderson, the “Grand Budapest” writer/director, whom Goldblum marveled, “enters what kind of looks to be a focused transcendental state of enjoyment” as he works on set.

Goldblum also said he spent a lot of time picking the brains of his co-stars on the film while they all shacked up in a hotel in Gorlitz, Germany, even if he’s been very famous since at least 1986, when he transformed for David Cronenberg‘s “The Fly.”

“I like to ask, living with everybody as we did, and hanging around, without making a pest of myself, I sort of like to inquire, how did you get this good and how did you learn and how do you do it?” What did you do to prepare?” he explained. “I know what I developed and liked to do but I’m interested in hearing from others about acting and about life in general. I’m a student of how to live.”

When it comes to managing what has been a 40-year career, Goldblum keeps it simple. “Don’t fall for the sales aspect of success,” he warned. “Offer something and make yourself substantial so that you can offer something of real substance, and live simply.”

“Make sure you leave more than you take,” the actor advised. “There are movies about that these days, I suppose this movie has something to do with living in a principled and noble way for something of conscience and civility and being willing to die for it. Hopefully we never get tested like that, but devoting your life to something you believe is beautiful is pretty good.”