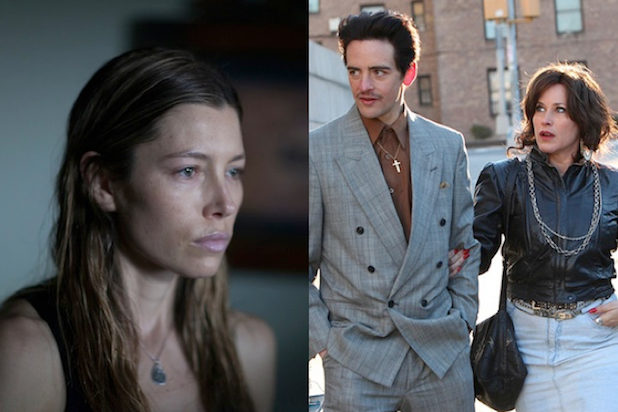 There’s a world of difference between a yoga instructor from Los Angeles and a mob-obsessed ex-con from New York – but in the hands of actors Jessica Biel and Vincent Piazza and in the films “Bleeding Heart” and “The Wannabe,” both flirt with the lure of violence in films that had their world premieres on the first two days of the Tribeca Film Festival.

Mind you, the films and the two characters don’t really have that much in common: one character lives her life shunning violence before she’s tempted to change her mind, while the other wants nothing more than to be a gun-toting godfather.

“Bleeding Heart,” which premiered on Thursday night and screened again on Friday, features Biel as May, a yoga instructor who tells her class in the first scene, “You have a chance to choose peace at every moment.” In the sometimes too-obvious world of writer-director Diane Bell’s film, that means she’ll be tempted to do exactly the opposite before the movie is over.

“It’s a bit of a strange film,” Bell told the audience at a late screening on Friday, and she was right: “Bleeding Heart” starts out as a quiet character study highlighted by affecting and subtle performances by Biel and Zosia Mamet as sisters (or are they?) who’ve never known each other.

The interplay between the actresses is reason enough to watch the film – but Mamet’s character, Shiva, is also a hooker with a boyfriend who is distinctly bad news, which sends the character study into thriller territory. It also puts May in a position to realize something that Bell (a former yoga instructor) realized for herself.

“I see in my own life that there are certain kinds of violence,” Bell said, “and I don’t know how you deal with that on a peaceful level.”

By the end, in scenes that veer between comedy, wish-fulfillment fantasy and tough reality, May has thoroughly examined the extent to which she’ll forsake her “choose peace” rhetoric.

Bell said there were many differing opinions among the film team as to how the movie should end – and while the one they chose was dramatically satisfying, she admitted, “I don’t feel comfortable about the ending of this film.”

For the lead character of “The Wannabe,” meanwhile, “choose peace” would be a slogan to laugh at, not embrace. Based on the true story of a pair of New Yorkers who robbed mob-sponsored gambling dens in the early ‘90s, the film focuses on Thomas, a twentysomething petty criminal who’s obsessed with Mafia movies like “The Godfather” and “The Pope of Greenwich Village” and equally obsessed by the trial of real-life crime boss John Gotti.

This is a mob movie about a guy whose worldview is shaped by mob movies, which makes it a good fit for executive producer Martin Scorsese and for a festival whose closing-night attraction is a 25th anniversary screening of “GoodFellas.”

Its writer-director is Nick Sandow, who has acted in a number of films and television shows and may be best-known lately for his recurring role as a jailer on “Orange Is the New Black.” And its star is Vincent Piazza, who played mobster Lucky Luciano on all five seasons of “Boardwalk Empire.”

In fact, said Piazza after the film’s world premiere on Friday, “the casting process became this one-degree-of-‘Boardwalk Empire’ thing,” with “BE” cast members Piazza, Sandow, Michael Imperioli, Domenick Lombardozzi, Patricia Arquette and others all appearing in the film.

Piazza’s character, Thomas, dearly wants to be a mobster but doesn’t have the connections or the smarts to figure out that he’s living in a world of fantasy, and that while he may have the wardrobe for that gig, he certainly doesn’t have the nerve. (When he robs his first gambling den, he pees his pants.)

Piazza is believably pathetic – and as the tougher, smarter but no less damaged part of this odd couple, Patricia Arquette creates a touching portrait of a woman who can only tough it out for so long before she too reaches for a way to escape.

“The Wannabe” is an affectionate homage to mob movies and also a wry twist on them, and it doesn’t let the facts of the story that inspired it get in the way. When asked after the screening how much attention he paid to the real story of Thomas and Rosemarie Uva, whose robbed mob-connected social clubs in 1992, he was succinct.

“I really didn’t think much about it at all,” he said.