There’s a scene in “Joyride” set to the Villagers’ song “Courage,” in which lead Conor O’Brien sings, “It took a little time to get where I wanted.” Technically, it takes one hour and six minutes to get to that point, but the route was fastidiously mapped out from the very beginning.

Just like its on-the-nose soundtrack, the rest of this Irish drama is as plain as day — with one exception. Why would Olivia Colman, a regular at Oscar and Emmy ceremonies and recipient of overall critical and audience adoration, waste her time with such a pandering project?

In fact, Colman was at the Academy Awards this very year with a nomination for her bracingly complex portrayal of parenthood in “The Lost Daughter.” So it’s a bit baffling to find her in a movie that feels like a faith-based social warning made in the 1950s, and designed expressly to discourage women from abandoning their babies. 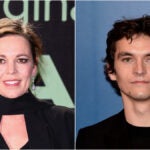 Anyway, Colman plays Irish solicitor Joy — yep, that’s her name, and yep, she goes for a ride, and yep, she finds joy. And also Joy. Because when the film begins, she herself is utterly lost. In another movie, mind you, she wouldn’t be. In fact, she starts out very firm about the decision she’s made: She has had an unplanned pregnancy, and will be giving her newborn to her best friend Mags (Aisling O’Sullivan) to adopt. She doesn’t want a child, Mags does, and that’s the end of the story.

Only it’s not, of course, because director Emer Reynolds (an accomplished documentarian making her first feature) and screenwriter Ailbhe Keogan (“Run and Jump”) need to teach Joy a lesson. And, in the most preposterous of this film’s many risible scenarios, they use a 12-year-old boy to do it. 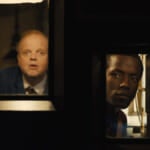 Mully (Charlie Reid) is the sort of foul-mouthed, soft-hearted kid who likes to sing “Minnie the Moocher” in the local pub — which is to say, the sort of kid that doesn’t exist outside of screenwriters’ minds. He’s recently lost his own mother, and his father (Lochlann Ó Mearáin) is a scoundrel who tries to steal the money raised at her memorial. Mully grabs it back and hops into the driver’s seat of an empty cab to speed away. But the cab isn’t actually empty; it’s got a sleeping Joy and her baby in the backseat. He gets a few miles out of town before all three realize they’re not alone, at which point there’s a fair bit of crying and screaming from all parties.

But this is a road-trip movie, so eventually everyone settles down while evading the police and gleaning life lessons from quirky side characters. Mostly, though, Mully (a kid who happens to have a baby niece) lectures Joy (a middle-aged lawyer who graduated top of her class and just gave birth) on how to hold and love and even breastfeed a newborn. For her part, Joy gives Mully the affection and support he’s been missing since his own mother died. 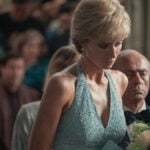 Colman does her absolute best to counter a scenario that manages to be both strangely off-putting and patly predictable, by shaping up a tartly unsentimental turn. Newcomer Reid meets her skill, offering an impressively confident performance in his feature debut. And cinematographer James Mather (“Here Are the Young Men”) gives us a gorgeous County Kerry landscape to admire while we await our inevitable destination.

But there’s no fixing a script in which, for starters, a tween boy attempts to insult and browbeat an adult woman into motherhood. What’s more, there’s never any doubting where these two meticulously-mismatched souls will wind up. Check every ounce of skepticism at the door if you’re determined to stick around for the ride.

“Joyride” opens in U.S. theaters and on demand Dec. 23 via Magnolia Pictures.