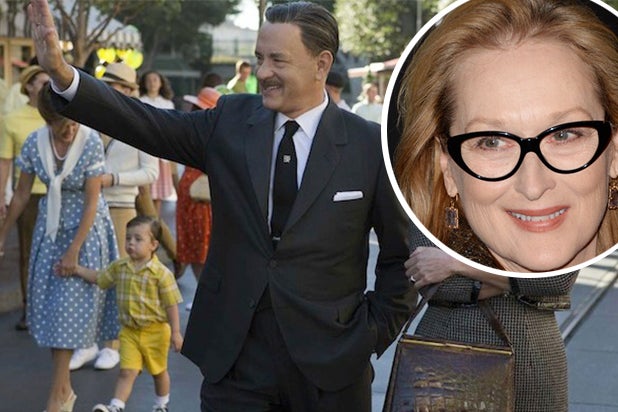 So far this awards season, we’ve seen people taking shots at the real Captain Phillips (he wasn’t such a hero, some crew members said), at the lead character in “The Wolf of Wall Street” (he’s horrible and Martin Scorsese should have said so, literalists charge), even at Solomon Northrup (did he really write “12 Years a Slave” himself back in 1853?).

And now it’s the late Walt Disney’s turn for some bashing – although the surprise isn’t that the movie titan played by Tom Hanks in “Saving Mr. Banks” wasn’t a saintly person, it’s that the person doing the bashing was none other than Meryl Streep, at Tuesday night’s National Board of Review awards.

Also read: Winners and Losers From the Guild Nominations

Streep’s comments about Disney came in what was by most reports a lengthy and very funny presentation to “Saving Mr. Banks” star Emma Thompson. The British actress plays author P.L. Travers, who fought bitterly with Disney over the film version of her “Mary Poppins” – and in her remarks introducing Thompson, Streep clearly came down on Travers’ side.

“Some of his associates reported that Walt Disney didn’t really like women,” she said, according to an account by Entertainment Weekly. Then Streep went into a discussion of how Thompson is the exception to the “received wisdom that says that the most creative people are often odd or irritating, eccentric, damaged, difficult; that along with enormous creativity comes certain deficits in humanity or decency. We are familiar with this trope in our business: Mozart, Van Gogh … Tarantino, Eminem … .”

Later, she returned to Walt. “Disney, who brought joy arguably to billions of people was, perhaps — or had — some racist proclivities,” she said. “He formed and supported an anti-Semitic industry lobbying group and he was certainly, on the evidence of his company’s policies, a gender bigot.” She read a letter that Disney wrote in 1938 to a female applicant to one of his animation training programs, in which he said, “Women do not do any of the creative work in connection with preparing the cartoons for the screen, as that task is performed entirely by young men.”

And then she brought it back to Thompson, and her performance in a role Streep had originally considered: “When I saw the film, I could just imagine Walt Disney’s chagrin at having to cultivate P.L. Travers’ favor for the 20 years that it took to secure the rights to her work. It must have killed him to encounter in a woman an equally disdainful and superior creature, a person dismissive of his own considerable gifts and prodigious output and imagination.”

By most reports, Streep’s speech had the audience in stitches – and it’s not like the makers of “Saving Mr. Banks” haven’t already been accused of whitewashing Walt Disney, a controversial figure whose portrayal in a movie released by the company that bears his name was always going to be difficult.

“There was concern, making a movie for Disney that portrays Walt Disney,” director John Lee Hancock told TheWrap. “But the script was written before Disney even knew about it. And if this were about Walt Disney, a biopic at Disney, then there would be so much more added pressure, because there are so many people in both camps that feel one way or the other about Disney. Because he certainly led an interesting life.”

The key, he said, is that the events of the film are restricted to a single, short time period, in which he and screenwriter Kelly Marcel knew that Disney was not engaged in union-busting or any of the other activitivies for which he has been criticized.

“This deals with two weeks in 1961,” Hancock said. “We pretty much know what he was doing in that period, and there wasn’t any union activity. So I thought, I think we’re OK here, as long as we get Tom Hanks.”

And as long as we muzzle Meryl Streep?

One of the questions is “What living person do you most despise?” Burnett, who once wrote a song called “Hefner & Disney,” put his tongue firmly in his cheek and answered, “Walt Disney.”