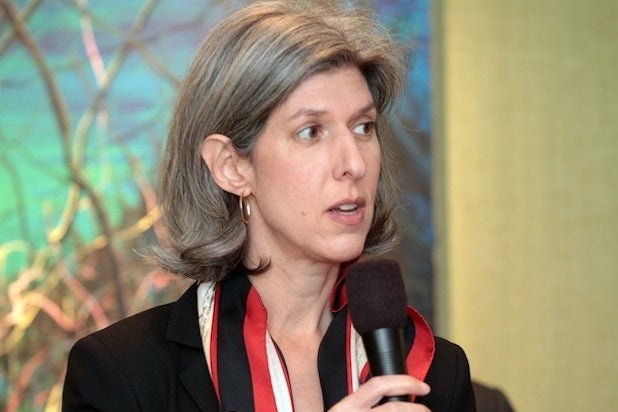 Lauren Zalaznick is leaving NBCUniversal after 12 years — and barely seven months in her newly created position, which took her out of her programming wheelhouse and tasked her with innovation and finding digital dollars across the company.

“I am writing to let you know that Lauren Zalaznick will be leaving NBCUniversal after 12 successful years working in a variety of leadership roles here,” NBCUniversal CEO Steve Burke wrote Friday in an internal email obtained by TheWrap.

Zalaznick, largely credited with turning cable networks like Bravo and Oxygen into destination TV for women, was promoted in February to executive vice president of NBCU Digital, in charge of digital strategy and monetization across all platforms. NBCU chairman of cable entertainment and cable studios Bonnie Hammer, meanwhile, took control of many of the networks that Zalaznick had stewarded.

Zalaznick will stay at NBCU for an undefined period of time, and it was not immediately clear where she was headed.

“Those of you who know Lauren well know she is one of those rare executives that combine great creative instincts with a true business orientation,” Burke wrote. “Her contributions to our company have been significant and far-reaching, from cable entertainment to Spanish-language broadcast, from digital initiatives to new marketing campaigns.”

Zalaznick was moved in a shakeup at the top of NBCU to — as Burke put it then — focus on “innovation, digital, monetization and emerging technology across the company.” Industry insiders had speculated that Zalaznick’s new role was merely a placeholder in the wake of NBCU giving many of her former responsibilities running Bravo and Oxygen to Hammer, who is now at the top of the network’s powerful, lucrative cable properties.

Before being moved up, Zalaznick’s title was Chairman of Entertainment & Digital Networks and Integrated Media. In that role she oversaw Bravo, Oxygen, Style, Telemundo, mun2 and Sprout, as well as the cable networks’ associated digital properties. That portfolio also included high-profile online IP such as DailyCandy, Fandango and iVillage.

It’s a time of upheaval across all of NBCUniversal, which recently ousted Universal Studios chairman Adam Fogelson and named Comcast international maven Jeff Shell, upping Donna Langley to chair and moving Ron Meyer over to NBCU, where he’s taking a vice-chairman role. Oxygen president Jason Klarman was let go, and new networks were added to the purview of Jeff Wachtel and Berwick.

Zalaznick rose fast at NBCU since arriving in 2004 in the company’s acquisition of Vivendi Universal Entertainment, where she was the president of the now-defunct TRIO network since February 2002. She seemed to be taking her new job driving digital innovation at NBCU seriously, bringing on A&E distribution executive Lori Conkling in February to be a senior strategist in charge of digital monetization.

I am writing to let you know that Lauren Zalaznick will be leaving NBCUniversal after 12 successful years working in a variety of leadership roles here.

Those of you who know Lauren well know she is one of those rare executives that combine great creative instincts with a true business orientation. Her contributions to our company have been significant and far-reaching, from cable entertainment to Spanish-language broadcast, from digital initiatives to new marketing campaigns. Lauren also has been an important champion for many of our company-wide initiatives.

Lauren will remain at the company to transition her current portfolio, and then consult with NBCUniversal on digital media content and technology marketplace trends.

I want to thank Lauren for her years of service. Her drive to innovate, her energy and her intelligence have made our company a better place. She has been an important member of our team and we wish her well in the future.