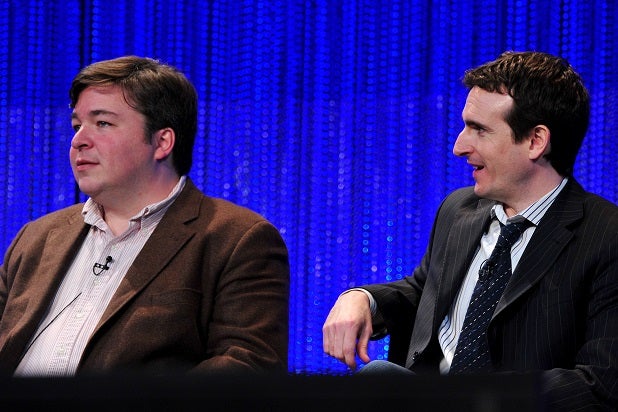 “How I Met Your Mother” fans can take heart in the fact that, even as their favorite show wrapped up, series creators Carter Bays and Craig Thomas are cooking up a spinoff in the form of the pilot “How I Met Your Dad.”

While Bays and Thomas have been as tightlipped about the spinoff as they have been about the remainder of “Mother,” some details have emerged as the project takes shape.

1. The two shows might have similar names, but “Dad” will be a whole new ballgame

“If this new show goes next year, it will be a brand-new show. It will be a brand-new story,” Bays told reporters last year at an event celebrating the 200th episode of “How I Met Your Mother.” “We kind of didn’t want it to have any feeling of trying to resuscitate something that has already ended.”

See video: ‘How I Met Your Mother’ Cast Does ‘Inside the Actors Studio’

Despite the creators’ assertion that “How I Met Your Dad” will be “a brand-new show,” Gerwig has said that it will share some qualities with its predecessor — even aside from the very familiar-sounding title.

“It’s funny,” Gerwig told E! Online earlier this month. “It shares the heart and soul with the original show, so it has the sweetness and the funniness.”

Cristin Milioti — who joined the “HIMYM” cast as the titular maternal unit in the finale of the show’s eighth season — would seem to be a natural bridge between the two projects. But that won’t be happening, because Bays and Thomas are burning those bridges.

Also read: Greta Gerwig Gets a Sitcom, Because All Your Indie Darlings Will Break Your Heart

“I almost wish we could use her. She’s good enough to do it, she’s good enough to carry a series,” Thomas told reporters last year. “But the thing that’s most important to us is that ‘How I Met Your Mother’ has its own ending, and then that’s it. It’s contained, it’s done. And then in the fall, if we succeed with the spinoff, we will have to make our case to the audience in a whole new way, with a whole new world, with whole new characters. And that feels right; we want to honor ‘How I Met Your Mother’ with the cleanest ending possible. And then, should [the spinoff] go forward, that will have to earn the love again in a new way and just be its own charming, different thing.”

4. But you know who is involved? Greta Gerwig

Ripples of surprise, if not outright dismay, spread through the television-loving community when it was announced that “Frances Ha” star Greta Gerwig had been cast in the lead role of “Dad” as Sally, a female Peter Pan who’s never grown up and is on the verge of a breakup with her husband of less than a year. Gerwig, known for her work in indie films, doing a network sitcom? But Gerwig will also serve as a producer and plans to write for the show, a commitment that suggests her decision to join the show isn’t a quick grab for mainstream cash.

See video: ‘How I Met Your Mother’ Cast Delivers Finale-Themed Top 10 on Letterman: ‘We’re All Naked’

5.The pilot will recognize same-sex marriage

Also among those cast in “Dad”: Drew Tarver, who was discovered at the CBS Multicultural Sketch Comedy Showcase earlier this year. Tarver will play Todd, Sally’s best friend and college roommate who is now married to her brother. The cast also includes Krysta Rodriguez, “Mixology” actor Andrew Santino and Nick D’Agosto (“Masters of Sex”).