Good luck finding a sweeter, more innocent film in 2022: “Mrs. Harris Goes to Paris” is a rapturous adaptation of the classic 1958 novel by Paul Gallico (“The Poseidon Adventure”), in which a kindly person pursues their goals, which are always just slightly out of reach. It’s a formula that’s custom-designed for audience satisfaction, and when it’s done right it’s nothing short of a miracle.

“Mrs. Harris,” directed by Anthony Fabian (“Louder Than Words”), tells the story of Ada Harris (Lesley Manville), a cleaning lady in 1950s London. Her husband went missing in the war, and she’s spent the last decade-and-a-half waiting for him to return, doing difficult jobs for rich people who don’t appreciate her. When word finally arrives of her husband’s fate, Ada Harris realizes it’s time to stop waiting and make her own dreams come true.

Mrs. Harris’s dream sounds much simpler than it is: She wants to buy a Christian Dior dress, an incredibly expensive purchase for which she has no practical use. She isn’t going to the Academy Awards or a royal wedding. She just thinks Christian Dior dresses are lovely, and she wants to have one — and if she scrimps and saves, she just might be able to afford it. 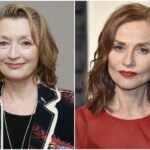 Fabian does a lovely job crafting a world where people are delightful but circumstances are impossible. The opening act of “Mrs. Harris Goes to Paris” is unusually long but absolutely vital, because Fabian (who co-wrote the screenplay with a trio of writers) understands that the harder it is for Mrs. Harris to actually get to Paris, the more satisfying it will be when she finally does. And the harder Mrs. Harris works, the more wonderful it feels to watch good karma come back to her and give her exactly what she wants.

The filmmakers also understand that if we, the audience, don’t share Mrs. Harris’s obsession with Christian Dior fashion, the movie won’t work on an emotional level. So infinite credit goes to costume designer Jenny Beavan (“Cruella”) for crafting impeccable and delicate dresses, and to cinematographer Felix Wiedemann for finding all the shafts of light that make them shimmer just so. The dresses in “Mrs. Harris Goes to Paris” aren’t just props; they’re a little bit alive, and they bounce in people’s arms with the urgency of adorable kittens who want you to adopt them. 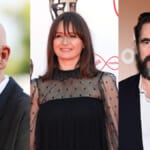 Mrs. Harris’s story doesn’t stop when she gets the money, of course. She still has to travel to Paris, where she can’t afford a hotel room, and to get into Christian Dior wearing her everyday outfit. No small feat, since Dior prides itself on glamour and exclusivity. Standing in her way is the grumpy Claudine Colbert (Isabelle Huppert, perfectly vicious), but opening the door anyhow are Dior’s good-natured accountant, André (Lucas Bravo, “Emily in Paris”) and supermodel Natasha (Alba Baptista, “Warrior Nun”), who secretly fawn over each other.

Matters become more complicated when Mrs. Harris discovers that, even though she has enough money for the dress, the words haute couture mean she can’t just pick one up off the rack. She’s got to stay in Paris for weeks even though she’s spending every penny on a luxury item. Fortunately, her can-do spirit, good nature and helpfully meddlesome ways foster fabulous good will from (almost) everyone she meets, and after working impossibly hard for impossibly long, “Mrs. Harris Goes to Paris” gradually fashions her with every nice thing she could possibly need. 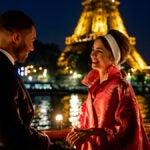 It is perhaps the ultimate fantasy, that all good deeds go rewarded; making Mrs. Harris’s world just punishing enough to drive the suspense, but just decent enough to actually work out, is a balancing act that director Fabian skillfully manages throughout the entire film.

“Mrs. Harris” doesn’t pretend that the evils of the world don’t exist. The film is rife with class commentary, in sometimes surprising ways. The beautiful streets of Paris are consistently choked with garbage due to a sanitation workers’ strike. And although Dior’s rich clients scoff at Mrs. Harris for reaching above her station, the accountants are desperate to make her happy because — unlike all those wealthy royals, politicians and celebrities — she actually plans to pay them, and in cash, no less.

Lesley Manville carries the film wonderfully — with pitch-perfect assistance from Jason Isaacs, Ellen Thomas, Lambert Wilson, Huppert, Baptista and Bravo — and refuses to make even a second of her performance feel superficial or twee. If we don’t believe in Mrs. Harris, we can’t accept any part of this mid-20th century fairy tale, and we never doubt her for a second.

It is an uncommon thrill to watch a charming film that comes by its charms organically. “Mrs. Harris Goes to Paris” knows that fluff is much more satisfying when it has depth, so you can truly sink into it and feel the overwhelming comfort. Now let us all hope for a crossover sequel where Mrs. Harris and Paddington Bear compete to see who can be more pleasingly pleasant. (My money is on the one wearing Dior.)

“Mrs. Harris Goes to Paris” opens in US theaters July 15.