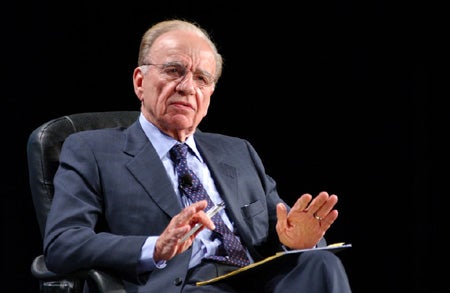 During a conference call with News Corp. investors Wednesday, Rupert Murdoch was asked about the reports of a truce between Fox News and MSNBC, and if the war between the White House and Fox News Channel has been good for business.

“We did not start this abuse,” Murdoch said. “Which we thought went way beyond – it was not personal on me, but others. And finally, we had to allow people to retaliate. We don’t believe in it. We don’t think it’s good for business.”

“As for tensions with the White House … I think they overplayed it,” he said.

Murdoch also commended rival networks for coming to Fox’s defense when the White House attempted to shut Fox out of a pool press conference. “I suppose they thought they might be next.”

“We don’t have any continuing problem there at all,” he said.

“They have said publicly that we are absolutely fair in our reporting of the White House,” Murdoch continued. “They just don’t like one or two of our commentators, which I can understand.”

He added: “It’s probably has been good for us, in terms of ratings.”

It has. As we pointed out before, in the two weeks prior to October 11 — when White House communications director Anita Dunn appeared on CNN declaring the administration’s renewed war against Fox – Fox News Channel programs averaged 1,206,000 total viewers, and 323,000 in the 25-54 demographic, according to Nielsen Media Research. Between October 12 and October 23, they averaged 1,312,000 and 368,000 among the 25-54 set – increases of 9 percent and 14 percent, respectively.

VIDEO: Daily Show Weighs in on War Between White House and Fox News

Democrats Urged to ‘Stay Off Fox’

The Latest War in Cable News: Fox vs. Obama