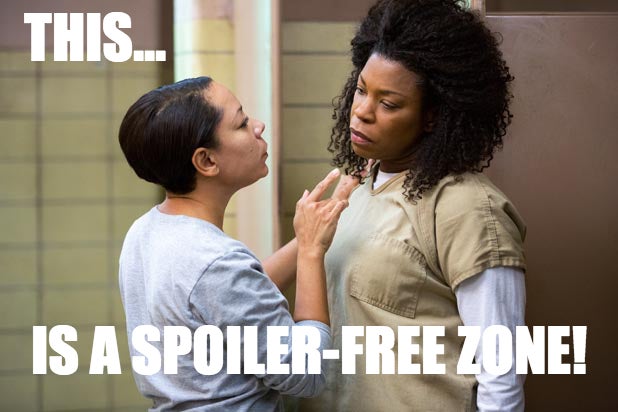 If you haven’t had a chance to binge the entire second season of Netflix’s “Orange Is the New Black” yet — perhaps because your boss would’ve been wise to you conveniently calling out sick on Friday morning — and are afraid of spoilers, well, there’s an app for that.

Short of cutting yourself entirely off of Facebook, Twitter, Tumblr, Foursquare, Snapchat, Instagram, Pinterest, and the whole rest of the internet until you’ve finished the series, downloading an app here or a browser extension there can let you have the best of both worlds.

TheWrap has found and tested a few options that can let you watch “OITNB,” “Game of Thrones,” or any other super buzzy show at your leisure and still live your plugged-in life like a normal human being.

1. Spoiler Shield
This iOS and Android app offers perhaps the simplest way to block spoilers for your Facebook and Twitter feeds: a menu of “Shields” including major sports leagues, television shows, and even celebrities — in case you don’t want that Kardashian baby news before “Keeping Up” airs. Just find the show you want to block, and tap to toggle on the shield.

The television options are robust and update regularly, so the latest trending shows and sports events can be filtered with ease. We hope a World Cup shield will be included in the next update.

Downside: You can only access your spoiler-free feeds through this app, which doesn’t have the full functionality of the Twitter and Facebook mobile apps — so no mentions, notifications, chat, RTs, etc.

2. Silencer
Silencer filters out spoilers on the web browser versions of Twitter and Facebook. You can input individual words and phrases, or you can use Silencer’s handy bundle of pre-selected words and phrases for particularly buzzy shows.

Downside: You can’t set what you want to silence remotely; in order to block spoilers, you have to actually visit the Twitter or Facebook website. Anyone who’s accidentally clicked over to one of those sites during prime spoiler time knows how your viewing experience can be ruined in an instant. So do yourself a favor and set up your Silencer well in advance — or have a friend who you can trust not to mess with your status do it for you.

3. UnSpoiler
Like Silencer, this browser extension for Chrome lets you filter spoilers on but for the whole internet. If you’re a Google News junkie like we are, that’s an important option to have — especially since big events on TV are what we write about every single day.

After installing the extension and setting up your filters, UnSpoiler puts up a warning over any content, like search results, that contain words on your spoiler list.

Downside: UnSpoiler is only available on Chrome so far. Because it works on the entire internet, it might over-censor for terms like “Turn” when you’re just trying to block out the AMC show.

4. Tumblr Savior
Tumblr is a bit trickier to despoil due to its setup as more of a blog than a microblog or social network. Many of the tricks and tips we found suggested writing complicated java script into your Tumblr page, but Tumblr Savior does the work for you.

The browser extension, which is available for Chrome, Safari, Firefox, Opera, and Greasemonkey, lets you set a black list of terms to filter out of your time on Tumblr — as well as a white list to always let through.

Just enter the text or hashtags you want to avoid under Preferences > Mute. You can also mute users here, so you can easily ignore friends who are prone to spoilers or official Twitter accounts of shows you follow.

Downside: You might have to get a little creative with the text you choose to mute. Filtering out “Game of Thrones” might work for people courteous enough to include those words in their tweets about “Game of Thrones,” but not for the myriad tweets that blurt out “OMG THEY KILLED JOFFREY!” (*spoiler alert*).