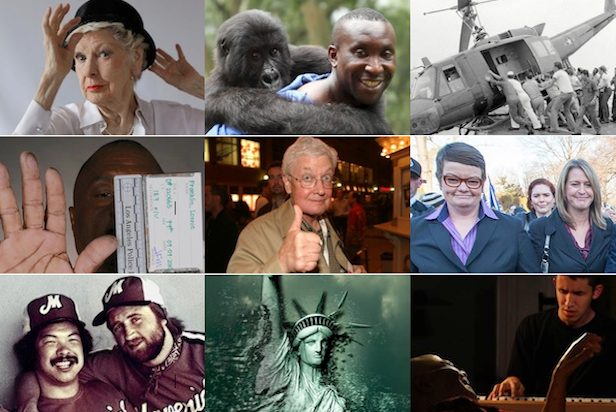 Voters for the Best Documentary Feature Oscar won’t have to sift through a record number of eligible films this year, but they still have a big job choosing 15 docs to make up the category’s shortlist.

That’s because 134 documentaries are in the running this year, according to a list of eligible films obtained by TheWrap. The number is shy of last year’s all-time record of 151, but it still represents a formidable pile of screeners to consider before first-round ballots are due in late November.

Contenders include “CitizenFour” and “Citizen Koch,” “The Great Flood” and “The Great Invisible,” “The Last Patrol” and “Last Hijack” and “Last Days in Vietnam.”

[Pictured above: “Elaine Stritch: Shoot Me,” “Virunga,” “Last Days in Vietnam,” “Tales of the Grim Sleeper,” “Life Itself,” “The Case Against 8,” “The Battered Bastards of Baseball,” “America: Imagine the World Without Her” and “Keep On Keepin’ On.”]

The approximately 400 members of the Academy’s Documentary Branch have received screeners of all eligible films, which were sent in monthly shipments, mostly over the last six months. Most of the shipments contained about 15 films, though September’s package had more than 50.

Each member has been randomly assigned a handful of films to watch, but are also encouraged to see as many of the eligible films as possible.

The Academy passed new qualifying rules in June, specifying that documentaries must screen four times a day during their one-week qualifying runs in Los Angeles and New York. In the past, docs only had to screen twice a day, making it much more cost-effective for filmmakers to pay for “four-walled” theatrical releases to qualify.

But films that had qualified under the old rule during the first six months of the year were deemed eligible by the Academy, and the total number of docs in contention is close to the previous year’s record.

This year’s top contenders most likely include the five IDA Awards nominees: “Citizenfour,” “Finding Vivian Maier,” “Point and Shoot,” “The Salt of the Earth” and “Tales of the Grim Sleeper.”

Other strong candidates include “Life Itself,” “Last Days in Vietnam,” “The Overnighters,” “The Case Against 8,” “Keep On Keepin’ On,” “E-Team,” “The Great Invisible,” “Happy Valley,” “Red Army,” “Rich Hill,” “Merchants of Doubt” and “Elaine Stritch: Shoot Me.”

(Maybe not among the favorites is Dinesh D’Souza‘s “America: Imagine the World Without Her,” which sits at a woeful 8 percent positive rating on RottenTomatoes. But D’Souza’s producer claimed a liberal doc-branch conspiracy spearheaded by former Academy governor Michael Moore kept his last film, “2016 Obama’s America,” from a nomination, so fireworks may await if this year’s film doesn’t make the cut.)

Missing from the list: “The Look of Silence,” director Joshua Oppenheimer’s follow-up to his Oscar-nominated “The Act of Killing.” The film played to rave reviews at some fall festivals and has been bought by Drafthouse – and a 2014 qualifying run could have put Oppenheimer in line to be the first documentary filmmaker since Walt Disney to be nominated in consecutive years. But Drafthouse and Participant Media are opting for a slower roll-out, following the model they used for “The Act of Killing.”

“Afternoon of a Faun: Tanaquil Le Clercq”
“Ai Weiwei: The Fake Case”
“Algorithms”
“Alive Inside”
“All You Need Is Love”
“Altina”
“America: Imagine the World without Her”
“American Revolutionary: The Evolution of Grace Lee Boggs”
“Anita”
“Antarctica: A Year on Ice”
“Art and Craft”
“Awake: The Life of Yogananda”

“The Barefoot Artist”
“The Battered Bastards of Baseball”
“Before You Know It”
“Bitter Honey”
“Born to Fly: Elizabeth Streb vs. Gravity”
“Botso The Teacher from Tbilisi”

“DamNation”
“Dancing in Jaffa”
“Death Metal Angola”
“The Decent One”
“Dinosaur 13”
“Do You Know What My Name Is?”
“Documented”
“The Dog”

“E-Team”
“Elaine Stritch: Shoot Me”
“Elena”
“Evolution of a Criminal”

“The Galapagos Affair: Satan Came to Eden”
“Getting to the Nutcracker”
“Glen Campbell…I’ll Be Me”
“Gore Vidal: The United States of Amnesia”
“The Great Flood”
“The Great Invisible”
“The Green Prince”

“The Hacker Wars”
“The Hadza: Last of the First”
“Hanna Ranch”
“Happy Valley”
“The Hornet’s Nest”

“Magician: The Astonishing Life and Work of Orson Welles”
“Manakamana”
“Merchants of Doubt”
“Mission Blue”
“Mistaken for Strangers”
“Mitt”
“Monk with a Camera”

“Nas: Time Is Illmatic”
“National Gallery”
“Next Goal Wins”
“Next Year Jerusalem”
“Night Will Fall”
“No Cameras Allowed”
“NOW: In the Wings on a World Stage”

“Occupy the Farm”
“The Only Real Game”
“The Overnighters”

“The Salt of the Earth”
“Shadows from My Past”
“She’s Beautiful When She’s Angry”
“A Small Section of the World”
“Smiling through the Apocalypse – Esquire in the 60s”
“Supermensch: The Legend of Shep Gordon“
“The Supreme Price”

“Tales of the Grim Sleeper”
“Tanzania: A Journey Within”
“This Is Not a Ball”
“Thomas Keating: A Rising Tide of Silence”
“Through a Lens Darkly: Black Photographers and the Emergence of a People”
“True Son”
“20,000 Days on Earth”

“Waiting for August”
“Walking the Camino: Six Ways to Santiago”
“Warsaw Uprising”
“Watchers of the Sky”
“Watermark”
“We Are the Giant”
“We Could Be King”
“Whitey: United States of America v. James J. Bulger”
“A World Not Ours”