The 2016 box office is up 2.1 percent over last year, according to ComScore’s final tabulation, released on Tuesday.

While overall domestic grosses were up, figures suggest that attendance was flat or even down from 2015. Ticket prices in the first, second and third quarters of 2016 were up by an average of 3.4 percent year-over-year.

The National Association of Theatre Owners is still due to report average ticket prices for the fourth quarter — but since those figures are expected to be higher from the same period in the prior year, it’s safe to assume that increased admissions costs compensated for lack of growth in the number of tickets purchased.

We will know for sure once the Motion Picture Association of America releases its annual admissions report.

The number of tickets sold increased by 4 percent in 2015, according to the MPAA, amounting to a total of 1.32 billion stubs. Average tickets sold per person increased to 3.8, or 3 percent, that year.

Among the major movie studios, Disney pulled the most weight, breaking global, domestic and international box office records. The studio ended the year with a dominating market share, topping 26 percent in North America. Its nearest follower was Warner Bros. at just under 17 percent (see chart below). 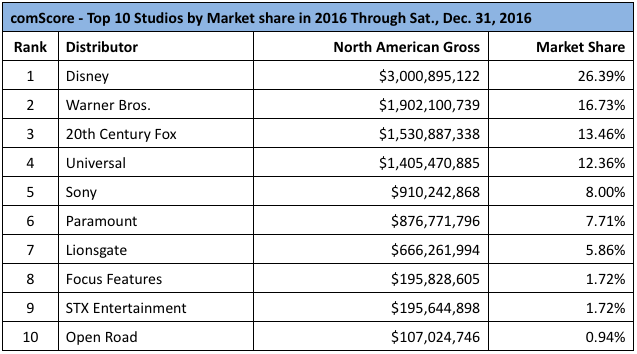 The Top 10 list for the overall domestic box office in 2016 also underscores Disney’s dominant year as the studio distributed six of the highest grossing films in the bracket:

Part of the reason the year didn’t see double digit increases at the box office is, in part, because of a girth of disappointments, including the summer, which started off in a steep slump. And then there was sequelitis, and even threequelitis — a phenomenon that plagued series followup films, the large majority of which didn’t earn as much as their respective predecessors.

If 2017 is to beat 2016 in both grosses and attendance, Warner Bros., Fox, Universal and other major players are going to need to step up their game in the face of Disney’s daunting competition, a television renaissance that keeps on chugging and increased streaming and VOD viewership.