We’ve given details on the eligible films in the Oscar screenwriting and original-score categories, but what about the rest?

Overall, 274 films are eligible for the 82nd Academy Awards (we have the entire list here), but they’re not all eligible in every category.

“Michael Jackson’s This Is It” (below), for instance, can compete for best picture, film editing, cinematography, sound mixing and sound editing, and art direction, but not for costume, score, screenplay or documentary.

When Oscar ballots in 15 categories went in the mail last week, most came with what the Academy calls “Reminder Lists,” which delineate all the eligible films in each category. In four categories – cinematography, film editing, and the two sound categories – every one of the 274 films in the field were deemed eligible. 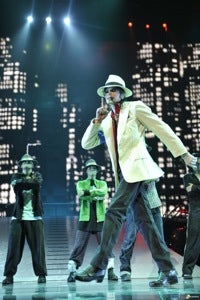 But the costume design reminder list, for instance, includes 239 films, leaving out the documentaries and animated films eligible in other categories. Among the films deemed ineligible is “Fantastic Mr. Fox,” Wes Anderson’s stop-motion film, in which the characters wear meticulous hand-sewn costumes. “Where the Wild Things Are,” which had been the subject of some speculation that the visual-effects component of the creature costumes might disqualify it, did indeed qualify.

Art direction, which does allow animated films to compete but leaves out most documentaries, has 251 eligible films.

The acting awards did not come with a reminder list, but the Academy’s booklet of all eligible films, which was sent to voters prior to the ballots, includes 252 films for which cast members are listed. The list does not include “Seraphine,” for which Yolande Moreau was named best actress by the National Society of Film Critics and the Los Angeles Film Critics Association. (Moreau will be eligible next year, if her film has qualifying runs in Los Angeles and New York during 2010.)

The two writing categories, original screenplay and adapted screenplay, qualified 259 films, 153 original scripts and 106 adapted. Some but not all documentaries made the cut here: “The Cove” and “Capitalism: A Love Story,” but not “This Is It” or “Food, Inc.”

The most restrictive of the 15 categories, original score, qualified 81 films.

The numbers, including the categories that didn’t receive ballots last week but had already announced their fields:

If you’re playing the odds, that means animated feature is the best category in which to compete, since a full 25 percent of the eligible films will receive a nomination. And apparently it pays to be an animator, because the next best showing is animated short, with a 13.5 percent success rate.

Documentary short, with a 10.8 percent rate (assuming that, as usually, four films are nominated) is the only other category where more than 10 percent of the qualifying films receive nominations.

Song, foreign-language film, live-action short and documentary feature have success rates between five and eight percent. Everything else is below five percent.

Only 3.6 percent of eligible best pictures will receive nominations, but that’s still better than the 1.8 percent return if this was a year of five rather than 10 best-pic nominees.